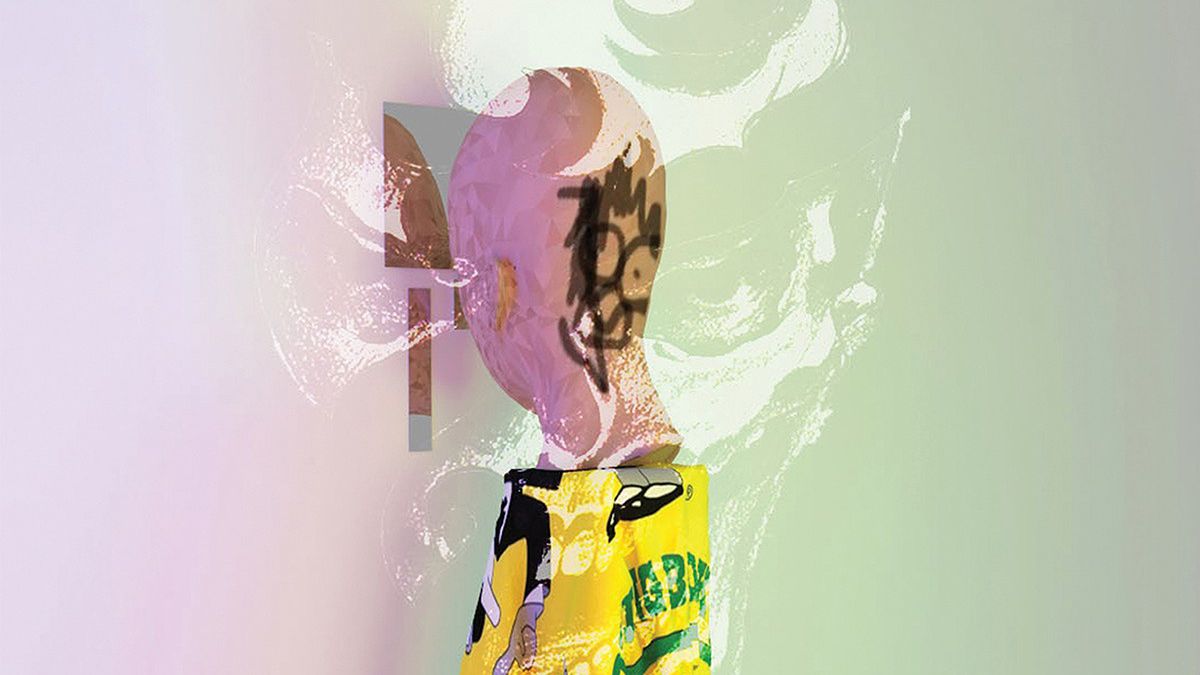 The first seventeen seconds of “Like a Version,” the opening track on Never Young’s eponymous debut EP, features a clipped digital beat and indistinct electronic gauze. For a moment, it’s quite like the opener on Grimes’ Visions, and it evokes the web-borne techno uploaded by PC Music affiliates. Quickly, though, a trap kit triplet rudely intrudes with snare and cymbal. The rock trope pivots Never Young into its backbeat comfort zone, where a punchy low end underpins incisively bent riffs and wrought, bleating vocals.

Jack Shirley, engineer at Atomic Garden, recorded Never Young, lushly saturating the wily guitar without compromising dynamic drumming. His touch is supremely satisfying, lending every change vigor and brunt. The thick production is a welcome foil for the vocals, which alternate between shrieks and creaky understatement. Only on “Crigsaw,” the closer, is the singing infirm, weepy, and without redeeming melodic value.

In recent interviews, members of Never Young brought up net art, and the press release for the album notes something cryptic about an iPhone. The digital-era fixations come through in the lyrics, which reference critical theory topics like copy-making and cultural spectacle, but the music is rooted in turgid grunge riffs and emo histrionics. Right now, those are on-trend influences. The very beginning teases a novel collision of computers and guitars, but Never Young settles for besting similarly nostalgic contemporaries. (Father/Daughter)

Sonny & the Sunsets
Talent Night at the Ashram

Sonny & the Sunsets’ Longtime Companion, from 2012, was a breakup album fitted with pop country nods. 2013’s Antenna to the Afterworld was inspired in part by death and the supernatural. In that spirit, there were synthesizers. Talent Night at the Ashram arrives with another prime angle: Bandleader Sonny Smith conceived of the material as accompaniment to an unrealized film.

It starts with a scene. I filled out an application/to be a human being/She put it on a stack with all the others, Smith sings, wryly as usual. Existential limbo is just another banal bureaucracy. A one-handed drumbeat keeps time and there’s just enough guitar to intimate changes. “Happy Carrot Health Store,” the album’s seven-minute centerpiece, is similarly restrained, with little more than woodblocks and handclaps to underpin Smith’s character sketches of the folks in a wellness bubble. There’s a music video in which Smith looks about as expressionless as his narrator sounds.

The movie backstory is suited to Smith’s writing strengths, as he does characters and inscrutable imagery very well. But, it leaves the music sort of rudderless. Unlike his last couple of records, Talent Night has no complementary genre inflection, which trains focus on Smith’s sardonic, detached delivery. Rarely dictating or eliciting more than slight bemusement, Talent Night at the Ashram is like a movie where “nothing happens.” (Polyvinyl)

Talent Night at the Ashram by Sonny & The Sunsets

The “Etc.” in Danny James, Etc. is either ironic or just cruel, because Pear is an ensemble achievement: each player is technically deft and, more pertinently, keen to the value of selective restraint, deferring to the will and structure of the song. Pear mostly draws from the 1970s, when virtuosity had commercial cachet, so long as melodies and hooks matched the chops. That’s where James comes in. His lilting delivery makes for honeyed listening. The falsetto harmonies, meanwhile, verge on saccharine.

R&B grooves couple with walking bass on “Tight Lipped,” with judicious wah-wah pedal bookending exultant choruses. On “Boomerang Kids,” the ballad sequenced in Pear’s core, James’ labyrinthine arrangement mirrors his narrative storytelling. The bridge at the center of the tale, all whirring keyboard and copious effects, is thrilling. The only misstep is “Lucke,” where a buzzsaw riff sounds out of place enough without the sparse, momentum-killing refrain.

Pear originally appeared on cassette in 2013, but the new vinyl version, thoughtfully packaged in a gatefold jacket, befits the diligent homage to yacht rock and R&B of the 1970s. Etc. and James share members with the like-minded Once & Future Band, together constituting an anomalous but welcome contingent in the East Bay. The groups are decidedly out-of-step with current tastes, but that’s only more reason to savor Pear. (Burger)