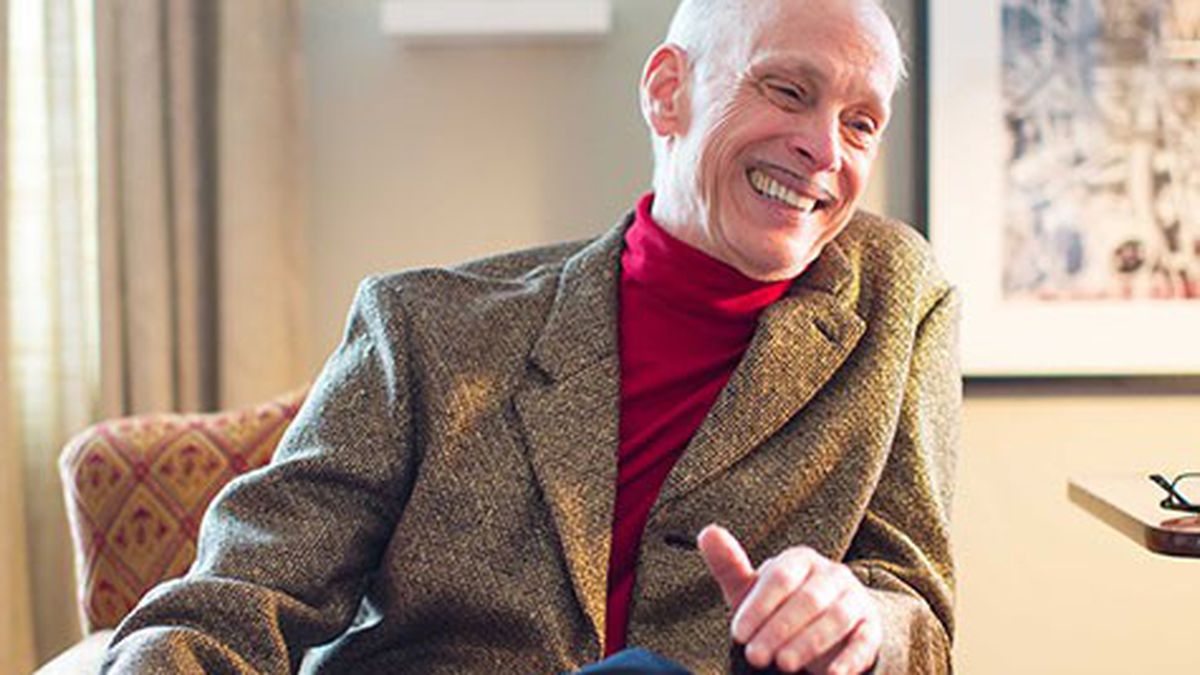 The celebrated filmmaker, writer, and host of this weekend's music festival in Mosswood Park reflects on the revolution, chipmunk terrorists, and the old countercultures' nostalgic fate.

“People here really thought the revolution was going to happen,” said John Waters in his San Francisco apartment. Absent the accentuated pencil-thin moustache, his upper-lip was unusually bare, though the venerable sultan of sleaze wore an impish expression above his loud red turtleneck. Waters continued reminiscing about Bay Area radicals: “I knew queens in The Cockettes who’d seriously sit there and read Lenin in drag, which is really kind of bizarre when you think about it.”

The day before, Waters was in Los Angeles to support the paperback release of Carsick, his bestselling account of hitchhiking across the United States. The book includes two fictional novellas — the best and worst-case scenarios — and the real tale concludes with his arrival in the San Francisco apartment. As we sat there, Waters eyed a red egg on the coffee table, a sculpture by the famously pricy artist Jeff Koons, and fussed over whether to display it cracked or intact. Next to it rested a bible cut into the shape of a gun. Later that night, he’d trek to Diesel Books for another promotional event in Oakland, where next week he’ll preside over the Burger Boogaloo in his inaugural role as festival host.

“I love that it’s in Oakland,” he told me. “People always say, ‘Oh, it’s the Brooklyn of San Francisco, but to me Oakland is the Baltimore of San Francisco — which I think is better!”

In keeping with his fixation on radicalism — its trappings, glory, and fun — Waters loves Oakland not the least because of the Black Panthers. Once, he told the San Francisco Chronicle that the person he’d most like to meet was Johnny Spain, a George Jackson protégé and one of the San Quentin Six, who subsequently arrived unannounced at Waters’ appearance at The Castro. They shared Easter dinner for years. He giddily reported having finally met Angela Davis, too, and commended Stanley Nelson’s upcoming Black Panthers documentary, Vanguard of the Revolution. “I loved Kathleen Cleaver, but Eldridge turned out to be one of the biggest assholes ever,” Waters said. “He started out great, for a rapist.”

Waters is besotted with the marginal and deranged. He cultivated a stable of the least likely filmic icons with the Dreamlanders, singular Baltimoreans such as Divine, Mink Stole, and Edith Massey. They starred in outlandish movies about maniacally vile people in delectably depraved scenarios. In books such as Crackpot and Role Models, Waters relished the real-life analogs to his fiction. His apartment teemed with true-crime, exploitation pulp, and mementos to provocateurs such as Pier Paolo Pasolini. He’s attracted to reviled individuals and the outliers who later gained respectability, including himself.

“When I write about extreme people, rich or poor, I write about things I love. Reality TV is ‘slumming it,’ because you’re looking down on your subject matter,” he said. “My best and worst characters, in a way I like all of them.”

Even Republicans? “It would be a Republican who would be pissed that Obama says he’s ‘evolving’ on gay marriage, because they’re right — that’s bullshit.” Waters continued, “The Republican that picked me up, we’re still friends. I’m going to be officiating his wedding now. I’ve married sixteen couples and only one got divorced, which is a better run than the Catholic Church.”

Even the militant, murderous gay separatists and vegans who propel a couple of Carsick’s nightmare chapters? “I’m not for that, but I’m interested in people who might be like that. Valerie Solanas was like that,” he said, referring to the author of the SCUM Manifesto who’s best known for shooting Andy Warhol. “She died here,” he realized, noting incredulously that she had a boyfriend at the end. “That’s really amazing when she wrote one of the best feminist lines ever: ‘[A male] will swim through a river of snot, wade nostril-deep through a mile of vomit, if he thinks there’ll be a friendly pussy awaiting him.’ It’s really a funny book.”

Waters is equally invested in ongoing expressions of unrest. Freddie Gray died in the custody of Baltimore police shortly before our interview, sparking near-constant citywide demonstrations. The first night of protests, he was there. “The second night, I left to go film a cameo in the Alvin & the Chipmunks movie, which didn’t feel so political,” he conceded. “But it is political! Alvin is sort of a terrorist.”

After the Baltimore riots following Martin Luther King Jr.’s assassination in 1968, he recalled, “they didn’t rebuild the neighborhoods that burned down, so why don’t you go burn down — well, I don’t want to say that because I’ll get killed!” Still, “there are neighborhoods that deserve to get burned down — if you’re a revolutionary.”

Is he a revolutionary? “I’m not. I have three homes. Certainly I understand that they were having as much fun at the riots there as we had here. See that pillow?” He gestured toward a throw cushion neatly embroidered with a cop car billowing smoke. “My mother made me that as a housewarming gift. That was from the Harvey Milk riot!”

At Waters’ lowest, he heard a rat puke. As a yippie, he pissed on the Pentagon. Then, he became one of the foremost transgressors in cinema. Now, he’s sixty-nine — “The age of a sex act that I’ve never been that fond of!”; the owner of a Koons; and a bestselling author. As he said, he’s an “insider.” “I don’t resent successful people and I don’t resent all rich people either,” he said. “Who else is going to buy my art and back my movies?”

And yet, his last movie — A Dirty Shame, a 2004 satire about carnal thrill-seekers defiling the town puritans — earned an NC-17 rating. “I don’t think anyone said it was obscene, except the Motion Pictures Association [of America],” he said. “It’s a juvenile movie. It’s a sex movie for thirteen-year-olds. No one over eighteen should’ve been able to see it.”

He’s struggled to secure adequate funding for another film, but indicated a potential segue into TV. “I may very well have made my last movie,” he explained. “Now, I’m not saying I haven’t made my first television show, which is more possible. Television is probably the best it’s ever been, even though I don’t watch it. I like to read, and you can’t do both.” He mentioned a July 1 deadline, shortly before the Burger Boogaloo.

Of the lineup, he noted, “Jonathan Richman is the only person I’ve ever cooked a vegan dinner for — right here in this apartment.” He likened the Boogaloo lineup to the soundtracks of his movies: stuffed with novelty tunes, garage, punk, doo-wop, and R&B. “I was around when ‘Rumble’ first came out, by Link Wray, so I’ve been there for punk and garage since the beginning,” he said. “I thought The Beatles ruined pop music. I hated them because they were so cheery and I thought they ended rhythm and blues, so I didn’t listen to listen to pop music from The Beatles until punk.”

The Sex Pistols, pogo dancing, San Francisco’s Deaf Club, and an aversion to disco consummated his affinity for punk early on, Waters explained. “I identified with that community, which was way gayer than it ever admitted. Huge amounts of punk rock stars were gay.” Plus, “it was a great look for girls who weren’t traditionally beautiful, still is. Pink Flamingos was a punk film but we didn’t have a name for it.”

I noted the nostalgic bent to the Boogaloo, which represents a scene that’s sometimes dismissed for its perceived campiness. “‘Camp’ is a word I wouldn’t even use anymore,” he replied. “Do young people even know what that means?” As for “kitsch,” he added, “That just means you’re European! … I have no problem with nostalgia for punk rock.”

Still, he was a little mystified by certain anachronisms. At the signing in Los Angeles, everyone was toting VHS, he said. “Is that coming back? They look really bad. Nowadays, I guess people are spending money to make their movies look like Pink Flamingos.” In a characteristically fanciful digression, Waters imagined vintage format purity taken to extremes: “Bad kids will go to the movies and take ipecac and projectile vomit at the CGI moments on screen! They’ll use blow-horns during the product placement! I’m really for that kind of comic terrorism.”

Sixty-nine, spry, and savvy enough to liken hackers to the “juvenile delinquents” of yore, Waters has unique longevity in the subcultural arena, and his appearance at the Burger Boogaloo illustrates it. He’s an icon to the “budget rock” set represented by The Mummies, which arrived in the late Eighties pining for the imagined rock ‘n’ roll purity of the Sixties, and to the festival’s younger artists, typified by the roster of labels such as Burger Records and 1-2-3-4 Go!, which owe a debt to revivalist forebears. Celebrating mavericks and trash culture is a multigenerational tradition, and Waters is a shared progenitor.

“When I was young, people found my films and called the police,” he said. “Now parents bring me their angry, fucked-up children as a last-ditch effort to bond, which I find so touching.”

But what does it mean if the old countercultures are things for parents to relate to their children through? “That’s what everyone has fought for. In Baltimore, the biggest gay bar just closed. Well, that’s progress isn’t it? If it’s all working, the young gay people I know won’t want to herd into one spot.” Waters continued, “I imagine this festival will bring in crowds that don’t even fit in to the punk community… . In some ways that’s better, but there will be no revolution if everyone can fit in.”

Nancy Pelosi Is Still a Hypocrite