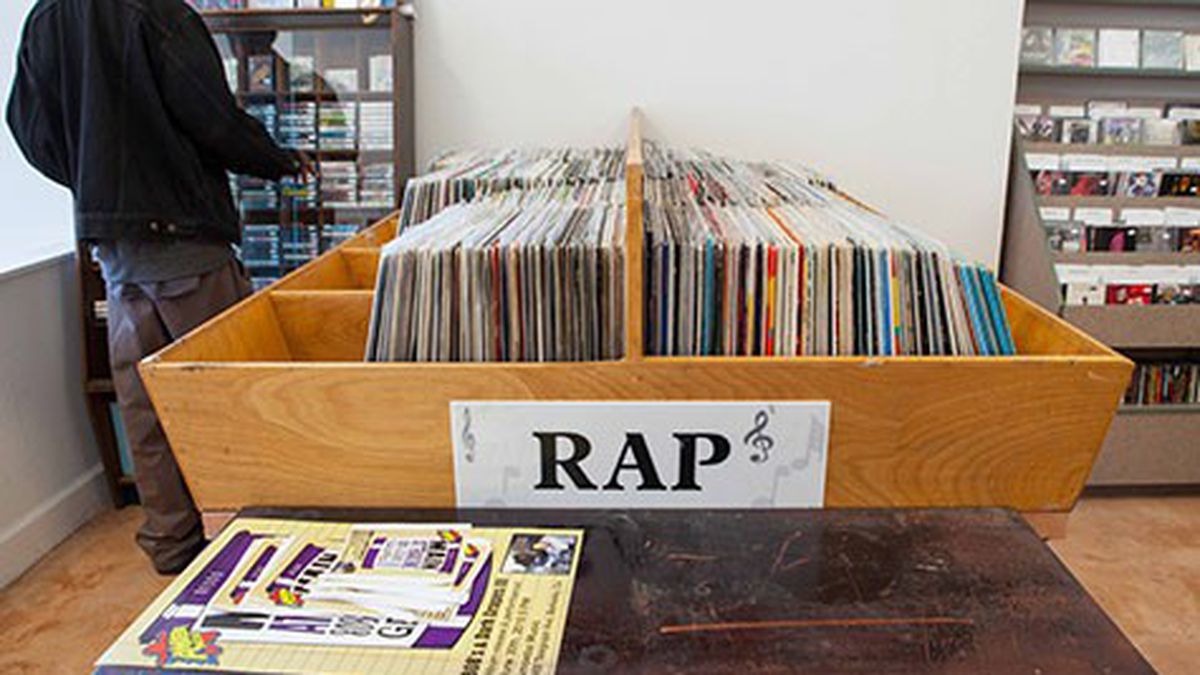 At Park Blvd. Records, Short Dog’s Back in Stock

Rap critic Noz and archivist 12ManRambo opened the only Oakland record shop with a Sick Wid It bin card.

“I’d been thinking of a way to pull back from the internet as a place to have conversations about music,” said Andrew Nosnitsky. Pricing discs, shuffling tapes, and speaking across a record store counter, he was the solution incarnate. For those who know Nosnitsky as Noz — the rap critic behind CocaineBlunts.com whose pseudonymous byline has visited most of the music sites that matter and regularly appears in The Wire — that statement might sound surprising. Still, steeping so long in all of that snippy digital chatter only underscored Nosnitsky’s desire for Park Blvd. Records, the shop he opened last week with prominent Bay Area rap archivist and dealer Jason Darrah, also known as 12ManRambo. “The internet’s a battle zone,” Nosnitsky said. “Everyone’s happy in here.”

Park Blvd. Records is the only Bay Area shop where E-40’s Sick Wid It label has its own bin card. There’s a local CD section, stocked with recent titles by Joe Blow, Berner, Kool John, and Roach Gigz (who personally delivered his wares). Last week, a wall of tapes bore artists such as The Coup, Poor Righteous Teachers, and several titles by Too Short, mostly sealed and priced between $3 and $15. By the checkout, there was an old box of Yo! MTV Raps trading cards. And as Nosnitsky and Darrah explained, specializing in hip-hop requires featuring its supporting genres. “We both came up in the crate-digging Nineties,” said Nosnitsky. “Knowing jazz and funk was important — and our store reflects that.”

In recent years, Amoeba, Rasputin, and car trunks have been known as the places to buy local rappers’ wares in person. But those sections keep shrinking. While shops such as 1-2-3-4 Go! and Econo Jam principally serve the punk community, which continues to prize seven-inches, LPs, and tapes as cultural currency, the rap game plays out online: Mixtapes drop on DatPiff.com and artists jockey for video premieres on WorldStarHipHop.com. Rap tapes and records remain collectible, as evidenced by the $100-plus twelve-inch singles listed in Darrah’s web-store, but Nosnitsky knows that Park Blvd. Records’ challenge is to appeal to kids, the digital natives who regard music more as a utility than a commodity.

Last month, New York rapper Troy Ave.’s quixotically titled Major Without a Deal arrived after an enviable press blitz to sell a paltry 4,000 copies in its first week. Worse, physical copies accounted for about thirty of those units. I prodded Nosnitsky about what that kind of sales figure means for Park Blvd. He laughed and joked that they’d get a Troy Ave. disc and write “limited edition” on it.

“I get that young people just don’t want to buy music,” he said. “So at least just come through, hold stuff, have a physical experience, and talk about it.” He also suggested that part of the reason no one buys CDs has to do with how few stores try to sell CDs. “What sets us apart is we’re actually going after them,” he said. “We’re like, how do we get the new P-Lo?”

Still, Park Blvd.’s principal clientele will be slightly older, inclined to collect, and perhaps nostalgic for when a store’s rap-forward agenda wasn’t so anomalous. Other shops tend not to even observe even hip-hop essentials, Nosnitsky said. He kept returning to the example of Too Short, positioning Park Blvd. as the place to consistently stock Life is… Too Short or Born to Mack — a fact that implies a grim reality: Even flag-bearing Oakland exports are elusive on their home turf.

Plus, Nosnitsky rightly noted that used buyers at most record shops regard twelve-inch singles as a nuisance, unless they’re exceedingly valuable (in which case they go online.) Not so at Park Blvd., he explained. “You won’t have to go through thousands of unorganized twelve-inches to find one of the good, later, Snoop Dogg tracks.”

I told Nosnitsky that I’d just read the forthcoming autobiography of reigning New Orleans bounce artist Big Freedia, which piqued my interest in the style’s formative tracks. He snapped into form, pulling the twelve-inch for DJ Jimi’s bounce staple “Where They At,” which Freedia credits with putting New Orleans hip-hop on the charts for the first time in 1992. Then, he pulled Full Pack’s “I Like to #@*!” twelve-inch, saying to disregard the title track and mind the b-side, “Giddy Up.” The records ran me $5 total.

Charles Glover, better known as Squadda Bambino of Main Attrakionz, is thrilled about Park Blvd. Records. “Noz — I’d been reading his blog for a long time and when my uncle told me that he’d opened a music shop in Oakland, I was shocked. It’s just like the places I used to go,” he told me. “It’s easy to drop a mixtape online. It’s harder to press it up and get someone to do the art and go out and move it — but that’s the culture. It’s where it needs to be: in Oakland. They’re bringing that culture back and we’re going to keep them open.”

The only 2015 post on CocaineBlunts.com announces Park Blvd. When Nosnitsky started blogging in 2003, he said, “It was a social space, not an economic one. No one was thinking about getting a job at Complex.” A trot through the blog archives — where Lil B can be found discussing Jandek in the comments section in 2009 — reveals the sense of communal fandom that Nosnitsky looks to reinstate with his brick-and-mortar. He’s wary of the digital arena’s aesthetic consequences, likening recent big rap records to “hashtags,” and laments how economic imperatives supplanted and smothered discourse online. Park Blvd. Records, the thinking goes, is insulated from that.

“We like vinyl because it holds music. The best business model for being in a room and listening to music all of the time is a record store,” Nosnitsky said. “Like, right now I’m just playing Future off of my laptop.”

Best Cornbread: An end to the cornbread wars?