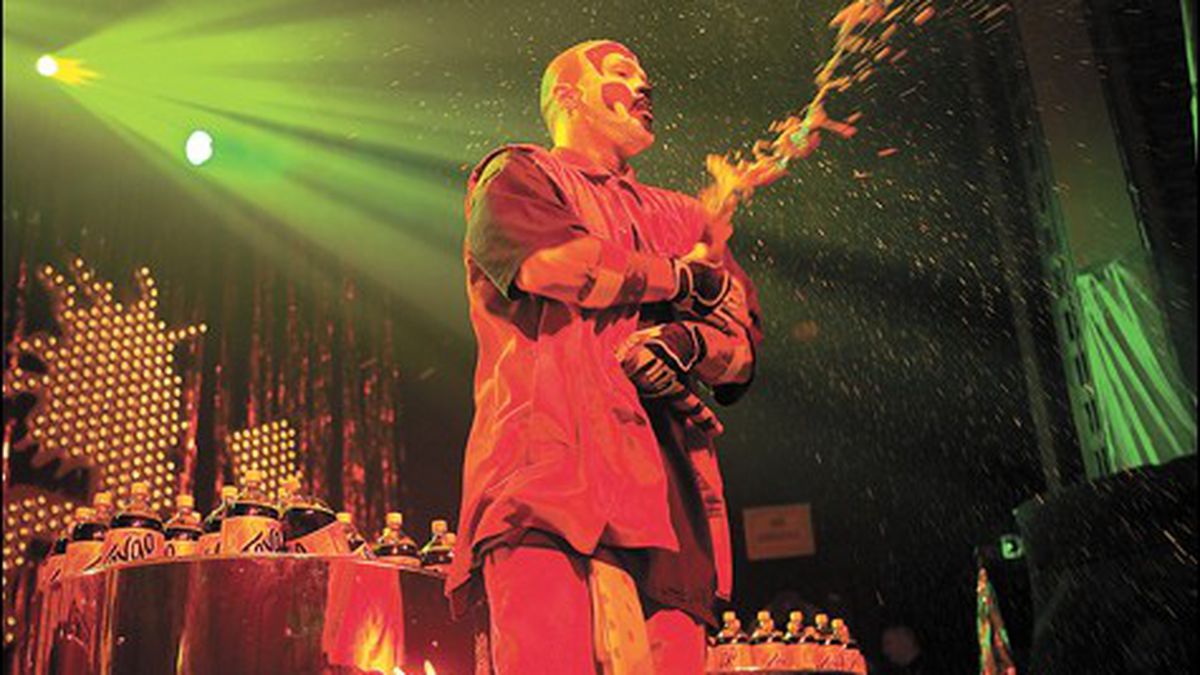 For Juggalos, an ICP show at the Warfield involves more ceremony than art.

Are you going in? Get some goggles and an umbrella,” advised a skinny 26-year-old in a Scarface T-shirt. The kid called himself Tubby 2 Fresh. He’d driven all the way from Marysville to catch Saturday’s show at the Warfield — an offbeat lineup of rap and hardcore acts, capped off by the infamous cult duo, Insane Clown Posse (ICP). To call Tubby a casual fan of ICP would be a gross understatement, since the band apparently has no casual fans. You either love ICP or you despise them — not for nothing do emcees Violent J and Shaggy 2 Dope brag about being the “most hated” rap act in America. They’re also the most beloved. Tubby arrived in full ICP regalia: backwards baseball cap, “Hatchetman” chain necklace, black-and-white clown face paint. He had already seen ICP perform several times and was well aware of what lay ahead. His friend Todd Okan — who also wore the Hatchetman necklace — had been following the band for twelve years. Both issued ominous warnings for the uninitiated. One word, they said: Faygo.

What the hell is Faygo?

Inside the Warfield, roughly one out of every three attendees looked exactly like Tubby 2 Fresh. Fans of ICP — who call themselves “Juggalos” and “Juggalettes” — express their devotion in varying degrees. Most wear the Hatchetman necklace (the logo of ICP’s Psychopathic Records). Many don the clown face paint. Some twist their hair in tiny rubber-banded braids. Some cover their mouths and wrists in bandanas. One guy arrived to the Warfield in a polka-dot clown suit.

“I just fucked some motherfucker up,” said one clown, sauntering by with his posse.

Two men sitting at a table behind the orchestra pit wore dark shades and bandanas over their faces. They’d driven from Santa Rosa to see the show. “I go to the Gathering every year,” said the older, leaner one, who called himself Krusty. (The “Gathering of the Juggalos” is an annual four-day campout.) “I haven’t missed a show since 2000.” Krusty had a dry, gravelly voice that rose in pitch as he talked. He punctuated all his sentences by slouching back in his chair and throwing up a hand sign. The signs weren’t consistent — sometimes they required three fingers, sometimes they used all five, with a huge V between the middle and ring. “It could mean anything,” he explained, leaning forward and flicking his fingers. “It could mean whatever the fuck you want it to mean.”

“That’s what we do,” said the other guy, who called himself Sideshow. Krusty flashed a triumphal hand sign. Asked about the Faygo, they both snickered.

At 10:15 p.m. the house lights flickered out and the stage lit up in gold. Imprinted on the back wall, in glowing gold Christmas bulbs, were two pictures of the running Hatchetman icon. A ringmaster came forth in a red waistcoat and black top hat. He asked if we were ready to witness the most-hated band in the world. The crowd whooped. Out came big, burly 38-year-old Violent J and wiry, 35-year-old Shaggy. Both wore black-and-white clown makeup. They launched into a rousing version of “In Yo Face,” a crude pairing of violent gangster rap with bluegrass music (snare and banjo were the most prominent instruments on the track.) Step yo’ ass back before the hatchet attacks, and you catch a few hacks from the axe! rapped Violent J. Clowns in spangly silver suits galloped around the stage, pumping their fists.

The meaning of “Faygo” quickly became apparent. It’s a cheap soft drink manufactured in ICP’s hometown of Detroit, Michigan. Made in more than fifty different flavors (including “champagne kola” and rhubarb pie), it’s evidently as good for throwing as it is for drinking. ICP made that discovery several years ago, when Violent J threw a bottle at a row of audience jeerers. Now, Faygo is the star of the show. Stagehands rolled out four huge buckets on Saturday, each stacked with several dozen plastic soda bottles. Clowns flitted in to replenish the ammo supply as Violent J and Shaggy sprayed their audience. Guys emerged from the pit with their shirts off, their muscles slathered in high-fructose corn syrup. “I-C-fuckin’-P in the house!” shouted a drenched fan.

Faygo served as a kind of ablution in a show that was more about ceremony than art. ICP fans are easily as devout as Deadheads. Juggalos wear the same costumes, use the same slang, make the same hand gestures, and regard each other with a spirit of brotherly love. The difference here is that Deadheads are about brotherly love, whereas Juggalos revel in alienation. There’s a kind of violence to ICP that goes beyond the fetishization of hatchets and gang banging. Part of it stems from shock value. ICP’s lyrics veer from bad (street-fight bravado), to very bad (machismo, domestic abuse), to flat-out evil (necrophilia, serial-killer fantasies, cannibalism), but their most profound songs are about loneliness and cultural ostracism. I have nobody, to tell about, my growing angers, rapped Violent J, in a ballad called “Truly Alone.” I have nobody to tell about me following strangers.

Such lyrics brought sudden clarity to a point that Krusty had made earlier that evening. “People don’t understand this shit. It’s something that you’re feeling, you know what I mean? It’s not for everybody. This is family.”

For all his morbidity, Violent J seemed to agree. “Ain’t nobody in the world happier than ICP, motherfuckers,” he warned before introducing a song called “Birthday Bitches.”

At a glance, the demographic at Saturday’s show was about 99.99 percent white, with only a few exceptions. Most of the fans I talked to hailed from rural, working-class areas outside of Sacramento. Their “Juggalo” identity seemed to fill a void. Maybe it provided a sense of rootedness and belonging. Perhaps it stood in for religion. Thus, it was little surprise that the show turned into a revival of sorts. Midway through a set of rapped murder ballads, ICP introduced a song that, according to Violent J, is the reason that they’re the most hated band, like, ever. It was a surprisingly un-ironic, feel-good track called “Miracles.” Water, fire, air and dirt, rapped Violent J. Fuckin’ magnets, how they work? Shaggy 2 Dope interjected. And I don’t want to talk to a scientist/Ya’all motherfuckin’ science is gettin’ me pissed.

It would be hard to tell how many bottles of Faygo were drop-kicked into the crowd, since the cache kept growing. For the last song, Violent J brought all the opening acts onstage, along with his young son, who was also decorated in clown face paint. The kid teetered precariously on the top of Violent J’s shoulders, spraying Faygo at audience members.

By the time ICP quit the stage at 11:30 p.m., the die-hard fans were so sloshed in soda that all of their clown paint had rubbed off. A couple were limping. Many were still flashing hand signs. As they filed outside the Warfield, a man appeared with an acoustic guitar in tow, and a cardboard sign that said, “Why lie? I need beer!” He sat down on Market Street, placed the sign before him, and picked up the guitar. His face was covered in clown paint.