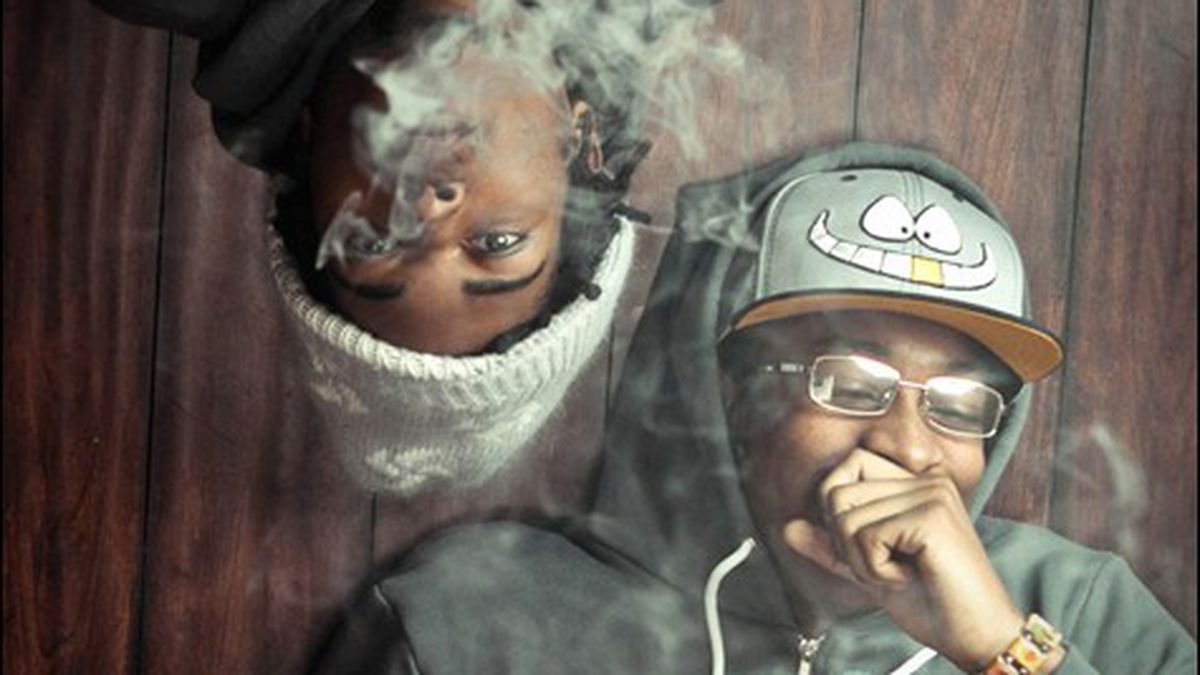 How to Be the Main Attrakionz

Local cloud-rap pioneers are poised to make good on their name.

In a converted warehouse on Martin Luther King Jr. Way, Mondre M.A.N. (aka Damondre Grice) sat looking a little disgusted. He held a cigarette with a paper clip stuck inside — the trick used in Pink Floyd’s The Wall — to keep the ash hanging on while the paper burnt away. Waving smoke from his face, he complained about the smell of the incinerated stogie. It was a prop for a music video that he’d been posing for all day, and he was dead tired, ready to wrap.

Squadda Bambino (aka Charles Glover) hung in the background. He was appearing in the final scene of the day. His was to push play on a laptop and then mosey over to the front door, posting up like a watchman while Mondre sat contemplatively in his chair, a setting to anchor the video. The video looked promising: The key scene involving a young rapper wandering down the street, stumbling, and falling in and out of a half-lucid sort of dream sequence.

It was the vision of director Sam Fuller, who a few hours earlier was lugging a mattress out to a street in North Berkeley for Mondre to fall onto in the video’s climatic scene. The duo stood outside, Mondre striding down the street and Squadda B leaning against a yellow hatchback. Their signature hoodies were just the right wear for the mild December afternoon. Why they chose this location wasn’t too hard to figure out: clouds. Not real ones, but the ones dotted in paint along the facade of Subway guitar shop.

Clouds have come to symbolize Main Attrakionz and the nebula of collaborators that’s coalesced around their Green Ova label. The tag “cloud rap” caught on several months ago when the blog Space Age Hustle (two guys who now manage the duo) coined it to sum up the young rappers’ style, which was emerging as more and more suited for its own classifier. It’s a style that’s inextricably linked to production, and depends on fresh instrumentals (mostly using spacey, wistful sounds and soft female vocal samples) in carving out a new niche in the hip-hop world. These “bedroom producers” and beatmakers hail from every corner of the continent: Alabama, Detroit, Seattle, or Nova Scotia — you name it and they’ve got a connection.

“When was that one-hundred-tracks-in-June thing?” Squadda consulted Mondre on a break between takes. “Oh yeah, ’09. We did a hundred tracks in June of ’09.” It’s not hard to believe. That’s the month they graduated high school, their first opportunity to focus completely on recording. It was their adeptness with the Internet that got them recognition in 2011, though. The network they’ve become a part of grew exponentially over the past year, and publications like Spin magazine took notice, ranking August’s 808s & Dark Grapes II among the top thirteen rap albums of the year. Mondre and Squadda don’t quite know what to think about it.

“Someone on my block told me, ‘I saw you in Spin magazine!’ Man that was wild.” Squadda sounded at a bit of a loss. “But I never really fucked with Spin. I’ve always seen Spin, but I never bought a Spin, I was buying XXL, The Source, Murderdog, Scratch magazine — never picked up a Spin or a Rolling Stone, always just saw that stuff on TV.”

To say that Mondre and Squadda relate to each other like brothers is probably selling it short, because they spend more time together than even the closest siblings. They’ve known one another since the seventh grade, when they began performing in talent shows under names such as 4Figgas and Cash Out Soldiers. They were also finalists in the star-search show Oakland Idol, a local television project that apparently got scrapped. That’s also when they were first introduced to Shady Blaze, a slightly older Oakland rapper who’s now a crucial part of Green Ova. They grew up within blocks of each other in North Oakland, and when Mondre’s mom moved out of the city, he began staying with Squadda. There’s a closet in Squadda’s room, lined with pads and blankets, that’s slowly becoming legendary as the origin of their early recordings. But it looks like they’re bound for bigger studios.

“I feel like once we stopped really working for it, it came to us,” Squadda shrugged. They’ve worked with the year’s most critically acclaimed new up-and-comers, part of an expansive underground scene. For instance, Detroit’s gap-toothed, nu-hardcore savant-rapper Danny Brown is one of their biggest fans, helping them boost their following even further. They spent a few days out in Harlem hanging with underground-turned-major-label success story ASAP Rocky and his crew, who Mondre called “real chill, down to earth.”

Mondre M.A.N. and Squadda B are both good-natured, and compared to the ASAP crew, they’re relatively shy and humble. They look down when speaking, shaking their heads and singing Green Ova’s praises quietly but with deep conviction. Mondre is tall and can be found sporting a signature white knit cap, or with his hoodie drawstrings tied in a bow. Squadda is a bit shorter, sometimes wears glasses, and has high cheekbones and a broad, warm smile. They’re humor is perhaps their strongest suit, and when they crack up it’s infectious.

It’s easy to imagine those grins pinned to their faces as they rap. Squadda’s vocals are warm and high-energy, his voice stretching like elastic for maximum volume, inflection, and definition. Mondre has a commanding drawl, a more reserved delivery that makes his raps sound more reflective.

“Cloud” is just one of the many terms that have been thrust on them in recent months, another being “lo-fi,” which Squadda said was a term that he hadn’t even heard of until everyone started using it to describe his beats. “Finally, I ended up looking it up on Wikipedia one day — I still don’t know what they mean,” his voice dropped off and he chuckled.

The two follow their instincts and rap over what they like to hear. And they’re experimentally minded, already tired of producers sending them the kind of beats “that they think they want to hear.” They’re excited to forge ahead and not get stuck in a genre that everyone seems to want to describe as “ethereal” rap music.

It’s this open-mindedness that accounts for their success. The army of producers alone could probably fill a small venue. There’s Ryan Hemsworth, Skywlker, Beautiful Lou, Keyboard Kid, Marlee B, Silky Johnson, Joe Wax, Bux, and Frienzone, to start. Then there’s Clams Casino, a New Jersey-based producer who’s rocketed to fame this year, and has made MAz some of their most quintessential and high profile beats. Clams works with scads of other rappers, too — everyone from Lil B to Soulja Boy.

“Real shit — I’m probably gonna have to stop listening to other people’s music,” Squadda confessed with a hint of desperation. He seems most concerned with not aping the style of other emcees. “That’s what we try to tell our manager. Like, at our first couple performances he tried to send us videos and shit, but I didn’t wanna click it and start soakin’ up what these other guys are doing.”

When asked what he’s currently listening to, Mondre paused, “It’s just whatever’s on ….” he put down the Swisher he was gutting for a blunt and looked through his music library. “I’m trying to see what I’ve been playing recently, but it’s all beats, or our shit.”

They’ve also taken a wending path when it comes to live shows. “Frisco’s payin’,” Squadda explained about the lack of East Bay shows. “In Oakland, it’d have to be us spending the money, or some house party shit. I don’t go see rap in Oakland. I’d never even been to a rap concert till we started rapping, this year.”

It’s odd: They had a live concert reviewed in the New York Times before they’d even played their first hometown show a few weeks ago at The New Parish. They’d like to play for their hometown but have found the best market in only very high-density urban areas. And being picked up by these publications is surreal, but that’s all. They measure success by their own creative output, and it’s only the magazines that they grew up coveting that still get them excited.

“Rumors — I can’t get too emotionally attached to it, man. I’m talking about that XXL Freshman shit.” Squadda seemed reluctant to mention the distinction that’s given to a handful of young emcees every year. Main Attrakionz didn’t show up in last week’s list of candidates for the magazines 2012 Freshman Class, which includes even such fluke rappers as V-Nasty, a few from Odd Future who currently produce little or no music, and a score of guys that no one’s heard of. Those who don’t fall into those categories are friends, collaborators, and musicians they look up to: East Coast guys like ASAP Rocky, Danny Brown, and Future. They know they deserve to be there, but they can’t afford to let it slow them down.

“You know what’s gonna be crazy,” Squadda says determinately, “is in 2013, it’s gonna be above ’em. There’s nothing they can do but just hop on or ignore us.” Even so, they’re trying to focus locally. Mondre dropped his solo EP M A N last month on Dream Collabo, and Squadda will drop his own solo release, Back Sellin’ Crack, on Green Ova any day now. From there, 2012 has plenty of exciting prospects in store, namely the official LP, Bossilinis & Fooliyones (pronounced like Italian mobsters).

On Sunday, Mondre wandered through a small 9th Street gallery space with Oliver Monday, who helped orchestrate Mondre’s video shoot and acts as a de facto handler while running his own small label, Dream Collabo. (For him, it’s a labor of love.) Squadda was home asleep. Monday scored the space for his friends with big ambitions: an art installation and interactive exhibit revolving around Main Attrakionz’s music. Mondre nodded as his collaborators from a CCA-based collective called On Task Family eyed the walls hungrily. Everyone was overflowing with ideas: TV screens in the windows, a recording booth in the mezzanine. All of it is set to condense into a big event at the end of February.

That’s a grand gesture but it doesn’t amount to hubris, not when you consider the rather plodding and calculated trajectory of Main Attrakionz career. It feels like they’re just accumulating, ready to pout over the bay like easy, nurturing precipitation instead of merely taking a city by storm.