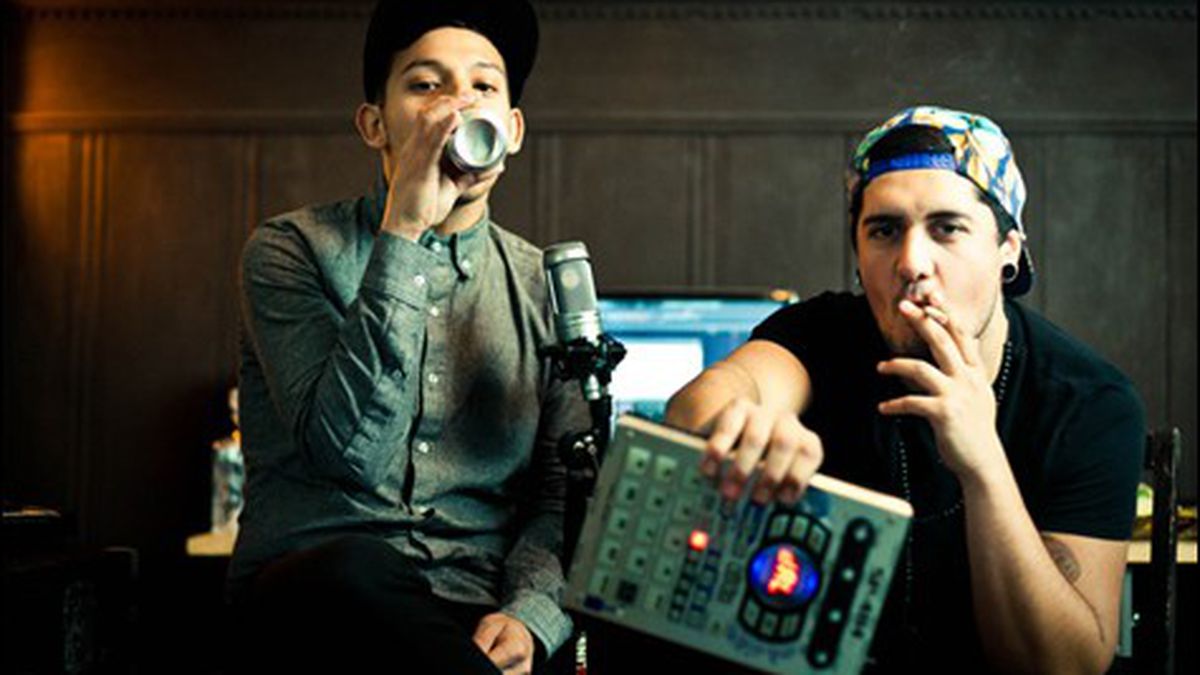 Last Wednesday afternoon, the two emcees of RnB Millionaires — a tall, tattooed, former volleyball player named Jason Canepa (aka Jay Casio) and a slender, congested boarding school alum named Justin Flores (aka Justin Loans) — sat in what could be considered their natural habitat: a spacious, dark room in a West Oakland flat, with sugary slow-jams blaring from the computer speakers. The room belonged to Canepa, and he’d decorated it to highlight his disparate interests. A thrift-store picture of a lion cub hung over the bed, just opposite a well-stocked mini-fridge and a desk piled with gummy candies. Next to the bed hung a poster of an American Apparel model, and next to that, a single window that Canepa had draped with a Teenage Mutant Ninja Turtles beach towel, to stanch any natural light.

It was here that he and Flores formed their group about a year ago, wrote their first songs, and assembled their first mixtape — aptly titled Scumbags. And it’s here that they continue to court the muse. “Within two months of being a group, we made 23 songs,” Flores bragged. “We would just sit here, eat pizza, drink beer, and write until 5 a.m.”

Evidently, it was a salutary process. Although the group is young, it has a fairly copious discography that includes three digital mixtapes and a whole cache of yet-unreleased tracks. The group’s name isn’t completely ironic, since Canepa did in fact listen to a lot of R&B in middle school, and since they really do embrace the idea that hip-hop is all about stacking chips and having a dissolute lifestyle. “At Hoodstock they called us R&B Billionaires,” Flores said. “And that’s kind of ironic, because really we’re just off fighting the One Percent.”

By almost no measure does the group’s career trajectory follow that of a typical rapper. Canepa played volleyball for El Cerrito High School and used to work as a video-store clerk. Flores, who grew up in Chicago, confessed in a rare moment of candor that his favorite movie is the romantic comedy Love Actually, starring Hugh Grant. He listened to a lot of Wu Tang Clan growing up, but his tastes never lay exclusively in hip-hop — “We’re both into indie music, obviously, right?” he asked. “‘Cause everyone is. ‘Cause that’s what’s cool.”

Currently both rappers work at American Apparel. They don’t make any attempts to obscure or change their backgrounds. Rather, they approach hip-hop with a degree of winking self-irony, as well as genuine reverence.

And in that sense, they typify a new school of Millennial-era rappers who aren’t burdened with the same social demands as their forebears. They filch influences from all facets of pop culture, use the Internet as a marketing platform, and don’t worry too much about creating a concrete persona. They tend to rap about “common man” topics that would ring true for two 26-year-olds who work nine-to-five jobs in retail and spend the weekends partying. They embrace the same DIY ethic that served countless indie rock and garage outfits, running their entire operation on a single computer. Their beats have the cold, metallic edge of downtempo electronic music, and they rap in the woozy cadence of the perpetually narcotized. Initially, they recorded all their vocals on AutoTune.

So it’s not surprising to hear the group’s list of influences: Drake, Big Sean, Atmosphere, Usher, Ginuwine, The Weeknd, local swag rappers IamSu and Lil B. They like stuff with a soft, murky palette, an air of self-indulgence, and a sense of humor about itself. Moreover, they like artists who combine the velvety tone of R&B with the machismo of hip-hop. “Lyrically, I think we’re stepping away from like, ‘Girl, I’m trying to do this and this,'” Canepa said, modulating his voice to imitate a cheesy, desperate, self-deprecating, warbling R&B falsetto. “There’s no rules,” he said. “We’re getting pretty X-rated, and like, not really giving a fuck.”

Thus the Millionaires’ music reflects the sensibility of their peers and by extension their generation, but in some ways it’s also very insular. Canepa and Flores met at a party roughly two years ago and became fast friends. At the time, Canepa was already producing beats on Frooty Loops, with the help of a microKORG synthesizer. Flores was drawing inspiration from a new crop of froggy-voiced radio balladeers. The two of them had several essential traits in common: They both liked schmaltzy movies and Eighties-era pop culture ephemera — particularly stuff having to do with the actor John Candy, to whom they’ve dedicated an entire song. They both enjoyed staying up late and nerding out in a home recording studio.

They quickly developed their own set of slang terms and signifiers: “Going Uncle Buck” means “going hard at a party” or “going buck wild.” Similarly, “going John Candy” means “doing it big,” because, in Flores and Canepa’s estimation, “John Candy was a big fucking dude.” The number “6” is important, too, since it stands for Canepa’s street address (3666, except that someone pried the “3” off his front door, at some point), and for their extended rap crew, Trill Team 6.

Flores explained: “We like to personify the act of partying in a way that people can relate to.” Not surprisingly, their music is larded with references — to older rap songs, to the iPhone app Instagram, to retro cartoons, to Twitter, to their own inside jokes. But it’s not so abstruse as to be impenetrable.

Co-headlining a recent Art Murmur after-party at Rec Center Studios in West Oakland, the Millionaires brought their usual simple setup: two mics and a sampler. Canepa cued up the extremely recognizable opening hook from Montell Jordan’s new jack swing song “This Is How We Do It,” and the rappers launched into what should have been an infectious set — until someone tripped the power chord. Absent their own tracks, the Millionaires had to rely on music from a friend’s iPod. They did their catchiest song, “Uncle Buck” (the John Candy ode), over the beat to Dr. Dre’s “Xxplosive,” which runs at about the same tempo. “This fuckin’ beat sounds horrible right now,” Canepa groused midway through the first verse. Audience members danced anyway. Nobody seemed to mind.

Rec Center Studios seems to fit R&B Millionaires to a T. It’s a dark, grimy, windowless garage with purposefully tacky décor — yellow drapery and second-hand paintings — and the crowd is transplanted directly from Oakland’s warehouse scene. It’s antithetical to the name “RnB Millionaires,” but suitable for the group’s campy aesthetic.

One year, three mixtapes, and zero physical products into their career, Flores and Canepa are happy to be making the rounds of local house parties, with a rip so simple it really only requires a mic and a cell phone. Right now, they don’t have lofty ambitions. “In the next year, we’re just putting out more music, trying to get more well known,” Flores said. He added that they’d talked about making champagne koozies to promote the current album, Tequilla Chandelier — as in small foam doodads to keep your hands warm while you’re popping a bottle of champagne.

It’s supposed to be ironic. Well, mostly. Explaining the koozie concept, Flores asked if I could substitute a dollar sign for the s, to make “koozie$.” “You know, ‘champagne koozie$,” he said wistfully. “That would be tight.”