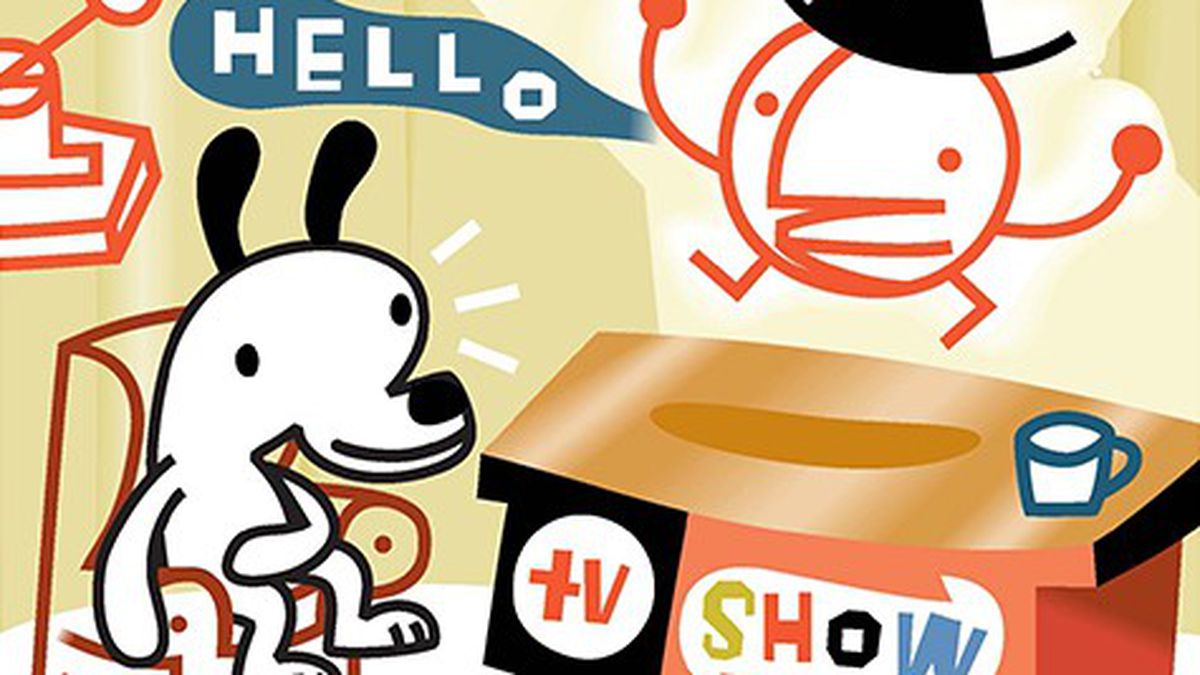 Oakland native J. Otto Seibold, famous for his zany children's books about a dog named Mr. Lunch, brings his illustrations off the page at the Contemporary Jewish Museum.

Mr. Lunch is a professional bird-chasing dog. In fact, he is so good that he gets invited to be on a television show to talk about his work. But, in order to get there, he has to take a plane, and he soon finds out that all dogs must ride with the luggage. So, Mr. Lunch has to find a way to keep himself calm and entertained throughout the trip.

That is the premise of illustrator J. Otto Seibold’s first children’s book, Mr. Lunch Takes a Plane Ride, written with Vivian Walsh. The 1993 debut was just the beginning of a long and fruitful career for the Oakland-born-and-based offbeat artist who has since illustrated fifteen more children’s books, including many others featuring the famous Mr. Lunch — a Jack Russell terrier with a bulbous head and small black eyes. Seibold’s books are popular for their wacky, retro cartoon aesthetic, which strays from conventional page compositions, and offers uncompromised originality and imagination.

When Seibold was in the process of publishing Mr. Lunch Takes a Plane Ride, his Viking Juvenile editor asked him to take out a sentence. “Mr. Lunch thought his passport photo looked handsome,” it read. The editor likely thought that it wasn’t relatable enough for kids. But Seibold isn’t the type to pander to the assumed tastes of audience demographics. So, he agreed to make the change, then never did.

Seibold was able to sidestep the request because he was the first children’s book author to publish a book with digitally rendered illustrations. At the time, Adobe illustrating software was still a new tool to the market. Most illustrating professionals hadn’t even learned how to use its complex vector mapping mechanisms. Seibold mostly taught it to himself, eventually mastering the fresh aesthetic of flat color fields filled with totally even tones — like paper cutouts pasted together. His editor didn’t know how to maneuver the program’s dense interface. That gave Seibold the opportunity to send the book off to print the way he wanted it — a tactic he said he used on many occasions to worm around editorial demands.

Seibold emerged at a perfect time for his work. “It was a unique moment in children’s publishing, where smart, contemporary stories and illustration styles were seen as commercially viable. This was before the internet wave crested and ‘everything’ became ‘cool,'” Seibold recalled in the exhibition wall text. At the time, “outsider art” was all the rage, and if you were interesting enough, you could walk into a publishing house with a half-baked pitch and charm them into giving you a book deal then and there. That’s how Seibold described the birth of his career as a children’s book illustrator — along with a grateful attribution to “dumb luck” — at the press reception for the solo show of his work now up at the Contemporary Jewish Museum.

The exhibit, J. Otto Seibold and Mr. Lunch, is testimony to the fact that it’s more than dumb luck that has pushed Seibold through his celebrated career. As Simpsons creator Matt Groening aptly pinpoints in the show’s introductory wall text, “J. Otto Seibold has somehow been able to inject the digital medium with the wholesome, seemingly hand-drawn style of the best children’s books.”  But it is lucky that he decided to keep the line about the passports, because that element of the story now plays a big role in the show.

The exhibit centers around the Mr. Lunch series, presenting large prints of pages from a number of the books, along with original character and page sketches. But the exciting part is the interactive installations. When you walk into the show, you immediately encounter a life-size wooden rendition of the customs security checkpoint and airplane that Seibold illustrated in Mr. Lunch Takes a Plane Ride. That leads into an area with the jail cell housing Mr. Lunch in Free Lunch, and the canoe from Mr. Lunch Borrows a Canoe. As children enter, they can pick up a small passport with Mr. Lunch’s handsome face on it, which they can add stamps to as they explore the gallery.

Seibold said it was important to him that the show be interactive in an analog way, without the screens and “clicky kiosks.” In one corner of the room there is a big desk with a massive computer and tiny chairs surrounding it — all built to resemble blown-up versions of Seibold’s 2-D illustrations. The desk is for Seibold’s “office hours,” at which he will be sitting in the gallery to do live illustrations for visitors. To do so, he needs a big Mac and a tablet, but he asked the builders to design a wooden housing for the monitor so that it would look like the unattractive, clunky machine that he used back in the 1990s. He prefers it “neutered from its luxurious, culty, silver Apple world,” he said, letting a bit of his anti-capitalist sentiments show through, as well as his dislike for the hyper-clean tech aesthetic that he manages to dirty in his digital renderings. (Seibold once turned down a hefty TV show offer from Sony Columbia because he didn’t want to put Mr. Lunch in creative hands he didn’t trust.)

Standing in the fancy pressroom of CJM, in front of a sleek metal wall and across from an arrangement of tiny, ornate cupcakes, 54-year-old Seibold brought his subtly rebellious style to the room without the help of his art. He wore a slightly wrinkled purple paisley button-down and a pink hair clip securing back the bangs of his stringy, brown locks. In this manner, he explained to the attendees that his aim for the show was to appeal to that one student who really didn’t want to get on the school bus. “There’s always one kid who is the version of me with the teacher on each side,” he said. That’s the kid whose mind he hoped to change.

During the same introduction, someone asked CJM’s executive director, Lori Starr, why Mr. Lunch belonged at the museum. Her answer was that Mr. Lunch is a quintessentially Jewish character, because he is an outsider. Throughout his journeys, he continuously struggles with alienation, learning to be proud of who he is and making things work his way. Even though he’s a professional, he’s forced to sit with the luggage because he’s a dog, and yet he finds a way to cope by using his imagination. I think it’s safe to say that Mr. Lunch makes sense as in incarnation of Seibold. And the show titled after the two offers an enjoyably multilayered opportunity for visitors of all ages to appreciate people and aesthetics that don’t comply with the conventions handed to them — and succeed because of that. Seibold obviously knows that he’s not a typical children’s book author, but he also seems sure that that doesn’t matter. As his bio states on the inside jacket of his books: “J. Otto draws all the time. It’s his job. He is a professional.”