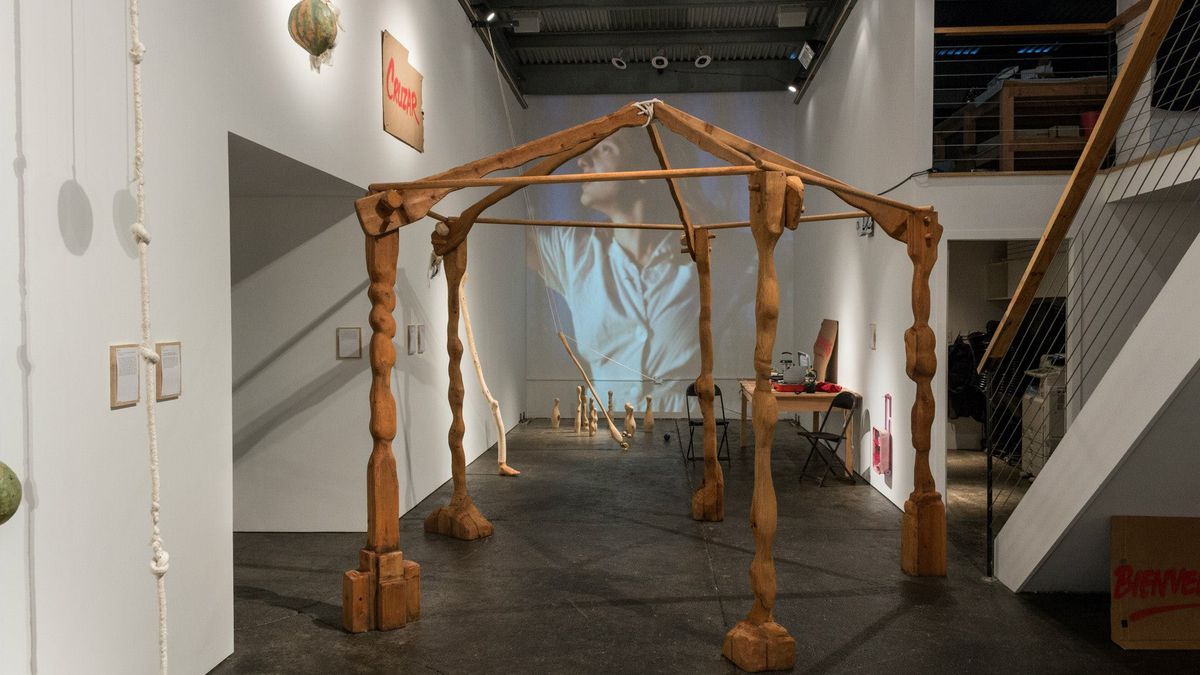 As part of the artistic production MobileInTent, Oakland artist Ann Schnake staged a spatial intervention at the U.S.-Mexico border with collaborators from Berlin and Guadalajara.

Over the past month, Oakland sculptor and social practice artist Ann Schnake drove from Oakland to Tijuana, Santa Fe, and Chimayo with a homemade tent strapped to her roof. The journeys constituted one leg of an ongoing sculptural and performance art project called MobileInTent, which explores boundaries by erecting a tent in public spaces and using it as a performance venue.

This year marked the 25th anniversary of the fall of the Berlin Wall, and in planning the next destination for her project, Schnake spoke with her German-American friend and collaborator Christine Schoeffer who is writing a book about the infamous barrier. They discussed the ways in which the wall acted as a physical structure that determined who has access to resources and entitlement, and explored how the border between Mexico and the United States functioned in a similar manner. Schnake, along with the Berlin-based performance artist Ursula Maria Berzborn, and two Bay Area-based performance artists originally from Guadalajara, Víctor Figueroa Infante and Marlet Torres Martínez, decided to take a trip to the U.S.-Mexico border in order to stage an experiment.

They built a tent out of carved wooden poles and canvas curtains. As exemplified by Occupy encampments in 2011, tents can function as social interventions when placed where they don’t “belong,” disrupting the oppressive, built environment. In and around the tent, Schnake and her team staged performances, created installations in collaboration with local artists, and prompted conversation, all while working to involve the communities and physical landscape that surrounded them. At the border, the performers wore stilts, climbed the fence while carrying long, wooden sculptures made by Schnake, and handed off a live bird to someone on the other side. On Thanksgiving, Schnake and her cohort served up a makeshift feast, and offered food to anyone who approached, including a family that hoped to cross the border illegally that night.

The group has now brought all the components of the project back to Oakland for a show at Aggregate Space (801 West Grand Ave., Oakland) entitled MobileInTent: Alta California + Parts Close By Re-mapping Forms, Trees, Rivers. The installation invites the viewer to mentally reconstruct the journey as they walk through the various sculptures and components of the piece, including the tent, which is set up in the middle of the gallery. The exhibit also features video documentation of the performances by Robert Gomez Hernandez, as well as work by José Inerzia, Adriana Trujillo, Jim Platel, and Rolf Zoellner. This year, the ongoing discussion in the art world (and beyond) about space, boundaries, and displacement has been bubbling in the Bay Area. This exhibit offers a crucial tangent to that discussion, bridging conversations on gentrification, immigration, and militarized cities by placing them within a broader interrogation of social geography and the ways we are controlled our environments.

The Play’s Not the Thing