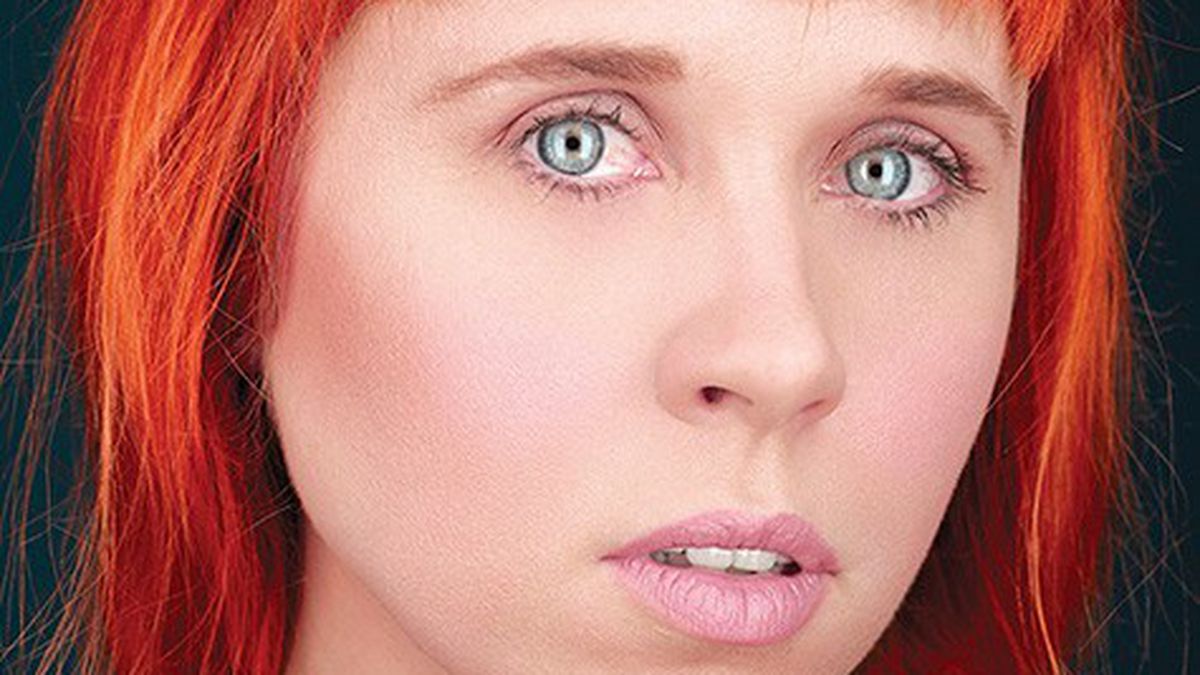 With a new album out on 4AD, the academic electronic artist is poised to spur conversations about the realities of technology and daily life.

In September 2014, Holly Herndon released a format-defying enigma: “Call,” a webpage with black-and-white images depicting fragments of Herndon’s face, computer keyboards, and animated textures that emitted scorched beats and treated vocals when visitors moved a cursor over the graphics. Shortly thereafter, Herndon released the music video “Home.” In line with what academics call “programmatic” music, “Home” arrived with an explainer: Herndon’s laptop is her instrument and a vessel of intimate personal details, she wrote, making the revelations about government surveillance a terrible violation of her privacy. Everything she’s entrusted to her laptop, her home, was actually vulnerable and exposed. So, in the video, she stared back at an observant agent while symbols related to shadowy federal programs poured across the screen. Blogs relished the headline-prime conceit: “Holly Herndon Breaks Up with the NSA.”

“Call” and “Home” were released as stand-alone entities, not promotional gambits ahead of an imminent album release. It seemed feasible at the time that Herndon was through with albums, which appear increasingly anachronistic in electronic music, an art form in which entire genres are native to the internet or even a particular streaming service. And yet, less than a year later, Herndon was lodged deep within the machinery of a press blitz for her new album, Platform.

The lead-up to Platform — set for release through 4AD, one of the world’s most esteemed indie labels — entailed mainstream media stories and a cover piece in Wire, the experimental set’s paper-of-record. The cover stories in Wire before and after hers featured veritable luminaries: Carter Tutti, of seminal industrial act Throbbing Gristle, and Roscoe Mitchell, a composer and jazz titan for more than fifty years. Herndon, a doctoral candidate at Stanford’s Center for Computer Research in Music and Acoustics, commanded the sort of rapt and broad audience that academic electronic artists typically only dream of.

“It is in a lot of ways a conservative industry,” Herndon said in a recent phone interview. “I’ve chosen to see the infrastructure of the music industry as something to play with. … That’s the main concept behind Platform: seeing the physical release of an album as a platform. Because it’s out, we’re having this conversation.”

Just about every track on Platform is a good catalyst for chitchat. “Lonely at the Top,” for example, is composed of sounds known to trigger ASMR (autonomous sensory meridian response), which refers to the little-understood but peculiarly pleasurable sensations elicited by certain stimuli. On the track, a masseuse murmurs affirmations to a powerful client while various ASMR sounds crinkle and snap in the background. Herndon has identified the sound of acrylic nails rapping on an iPhone as her trigger. She’s also interested in the phenomenon’s attendant online community, and of the fact that collectively obsessing over particular sounds isn’t so dissimilar from fetishizing a genre or the timbre of a particular instrument.

There’s little in the way of four-on-the-floor backbeats on Platform. But while it’s much further afield than, say, a fairly recent, emblematic 4AD title like Grimes’ Visions, Herndon’s music is still quite accessible. She’s steeped in dance culture, having spent formative years in Berlin, where she recently staged a special performance at the notorious nightclub Berghain. Techno listeners will recognize Platform’s carefully attenuated mix, club-calibrated sheen, and the universal pleasures of careful arrangements. Herndon is also rooted in the scrappy noise scene, where punishing listeners (or at least perverting concertgoers’ live expectations) is something of a sport. Herndon’s work isn’t beholden to the fashionable ideas of either camp in particular, nor is it smothered by academic overtures, but elements of each community inform her nuanced take on technology and performance.

For one, she bristled at the notion that laptops are inexpressive or poorly suited for performance — an attitude that enjoys a lot of cachet in experimental communities focused on analog synthesis and magnetic tape. Herndon reckoned that a laptop is, in fact, the most dynamic instrument. Furthermore, since laptops mediate private interactions so much in the digital age, Herndon has mined her cache of personal data for malleable creative material. Her husband, Mat Dryhurst, is a key collaborator in this regard. “Home,” which also appears on Platform, is composed in part from recordings that Dryhurst surreptitiously made of their digitally-mediated interactions. He calls the technique “net-concrete.”

Live, Dryhurst does this on a grander scale, frequently projecting the Facebook profiles of concert attendees on a screen. In Wire, Dryhurst likened the tactic to how hackers benignly prank people to expose vulnerabilities. Herndon described it as part of an effort to blur the line between performers and audience. “I like the idea of having the performances be site-specific — having virtual spaces mimic the room where we’re performing and collapse the difference,” she told me.

Herndon’s exultation of the laptop and virtual experience shouldn’t be mistaken for the tech-triumphalism spun by local startup founders. As “Home” illustrated, Herndon is keen on checking the machinations of power lurking at the intersection of dollars, data, and control. “You should always be suspicious of the motivations of multinational corporations,” she said. “But that debate becomes oversimplified. We don’t have to just accept the fact that Facebook owns all of our data and sells it advertisers. It’s good to be skeptical, critical — and proactive.”

Herndon emphasized the need to “liberate technology.” In that sense, she echoed some of the old Silicon Valley innovators who were inspired less by speculative IPOs and more by the nerdy idealism of their immediate peers — which is also how Herndon has described her department at Stanford. While she’s prone to citing theorists and analytical language, Herndon also emphasizes the stark realism at the core of her tech-centric practice. “These aren’t actually crazy, weird ideas,” she said. “They’re about things everyone is doing all of the time, right now — so it’s important to be given art that reflects as much.”