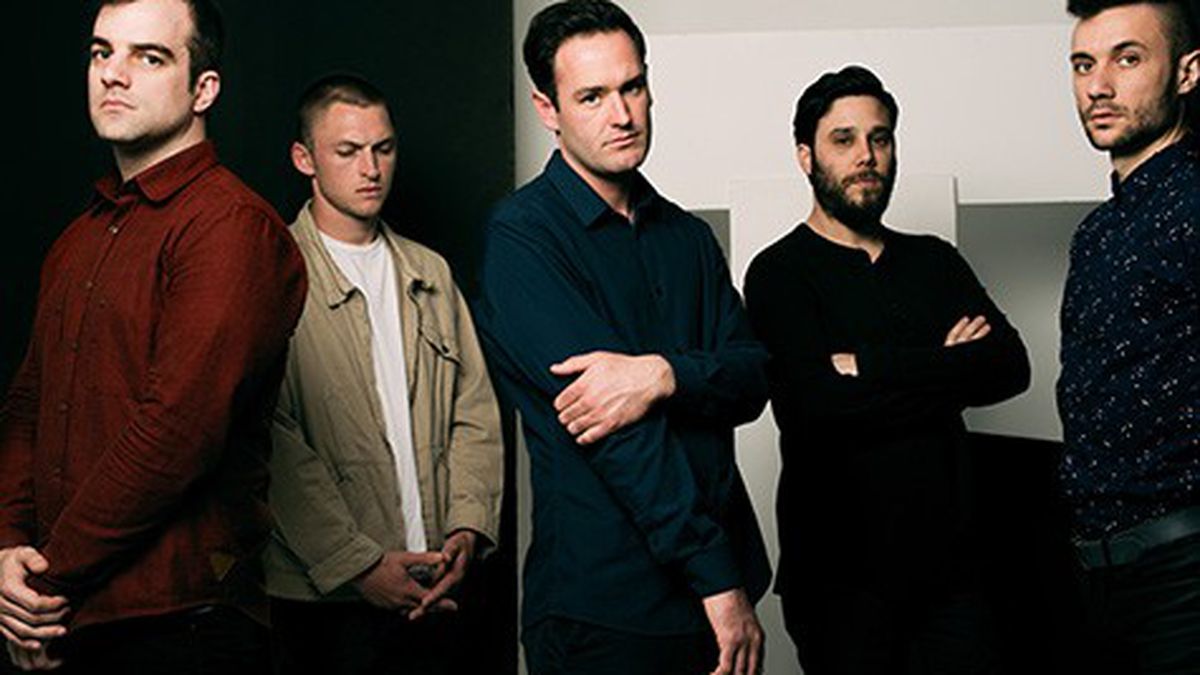 Anthony Anzaldo settled into a nook at Timeless Coffee on Piedmont Avenue in Oakland. A wavy flattop bobbing above his face, Anzaldo posed a rhetorical question: “How many hardcore bands’ fifth album is your favorite?” Answer: none. Hardcore deals mostly in seven-inches. Plus, longevity tends to engender misgivings, if not resentment, among genre devotees. Anzaldo’s band, Ceremony, is about to release its fifth album, The L-Shaped Man, and the quintet doesn’t write hardcore songs anymore, which gets at his point: remake or regress.

Ceremony’s first twelve-inch, Violence Violence, appeared in 2006 with the staccato beats and miniaturized hardcore songs that people tend to peg “power-violence,” yet featured more individuality than the style typically allows. The songs fulfilled the hardcore imperative to sound brutal and what not, but squirrely flourishes distinguished the record. Even early on, it was evident that Ceremony had toiled long enough as hardcore bruisers from the ‘burbs to become a tad bored with the music it had adopted to stave off boredom in the first place.

By 2010, that restless undercurrent started to assume the foreground in Ceremony’s music. On that year’s Rohnert Park, vocalist Ross Farrar yapped on the arresting opener, “Sick,” Sick of being sober/Sick of starting over/Sick of Black Flag/Sick of Cro-Mags. Fittingly then, the album plays like Ceremony frenziedly trampling hardcore’s formal constraints, wielding its duo-syllabic invective and devastating downbeats nonetheless. “Terminal Addiction” is a suffering screed for malcontents everywhere, while the eerie “Doldrums” appealed to the spacious post-punk sensibility forerun by the band whose song Ceremony took its name from, Joy Division, though the comparison has been annoyingly overstated since.

Thing is, Ceremony could’ve broken up after Rohnert Park, cementing punk scene notoriety with an excellent full-length on the reputable Bridge Nine label. There aren’t many hardcore bands whose third album is considered the best, but Ceremony could’ve joined that club. Instead, the band fielded interest from Matador Records, one of the country’s foremost indie labels, and prepared to release Zoo, a complete departure from hardcore, in 2012.

“I remember thinking, we’re either gonna break through or be done,” recalled Anzaldo. “Neither happened.” Indeed, Ceremony’s leap to Matador didn’t diminish its punk credibility. The record release show at Gilman was wild: A mass of bodies shouldered toward the stage, fists extended. The stage power faltered suddenly, leaving only the awesome chorus of a hundred shouting kids. But Zoo didn’t garner the anticipated crossover audience, either. It sold about as many copies as Rohnert Park. Pitchfork snubbed it, likely dashing label hopes for a repeat of Fucked Up, the Canadian hardcore band that Matador punted into the indie stratosphere. Still, Anzaldo reckoned that Zoo’s reception just set the stage for a follow-up; they could stop worrying about the conservative punk party line. “If you’re still on board now,” said the Oakland resident, “you know we’re not going to write Violence Violence again.”

But the creation of The L-Shaped Man was marked by crises. Farrar and Anzaldo endured break-ups. The band members had scattered between Oakland, Sonoma, and Philadelphia, where second guitarist Andrew Nelson started Dark Blue and toured in support of its well-received 2014 debut, Pure Reality. Anzaldo joined Creative Adult, among other projects.

Amid all of that was a recording process that Anzaldo likened to the notoriously delayed Chinese Democracy. Ceremony demoed in 2013 at the band’s rehearsal space in Oakland’s Temescal district. Anzaldo refused to say the words “pre-production,” but conceded that Ceremony did as much. Plus, there was post-production, along with what’s known in industry parlance as “scrap the vocals and start over.” Each step occurred as many as six months apart.

All of which was worth the hassle, Anzaldo said. John Reis, the San Diego rock polymath best known for fronting Rocket From the Crypt, recorded The L-Shaped Man. On Reis’ advice, Anzaldo wrote additional material. Everyone decided to track the core instruments live, rather than individually, like for Zoo.

Reis’ faith in live ensemble feel was well suited to Ceremony. Why take players whose chops were honed together in a room and then pry them apart in the studio? The L-Shaped Man argues in favor of keeping the unit intact.

It opens with “Hibernation.” Farrar creaks out weepy missives over teardrop piano, each note’s resonant tail warping out-of-tune. Next comes “Exit Fears,” which, along with the album’s single, “The Separation,” sounds quite like Interpol, another Matador act that garnered copious Joy Division comparisons. The likeness is in Farrar’s tuneful but tonally gated vocals and the band’s interlocking eighth-notes. The similarity doesn’t undermine The L-Shaped Man much, not when Anzaldo’s lithe leads crosshatch the group’s propulsive low-end on ace songs such as “The Party.”

Anzaldo emphasized that Ceremony was looking to make a cohesive record, but one of the best tracks, “Root of the World,” is an anomaly. Snare spasms and a woozy chord progression propel the mid-tempo dirge, while Farrar’s old bark mingles with six-string shrapnel to rousing effect. “Some people in the band thought [“Root of the World”] was too much of a sore thumb,” Anzaldo said. Most of Farrar’s vocal tracks were rerecorded at the label’s request, he explained, which should pique the curiosity of listeners who prefer the nastier approach lingering on “Root of the World.”

Anzaldo said that Ceremony’s through-line is restraint. “We don’t want to be technical,” he explained. “I’m interested in the stuff that makes me think, how didn’t I write that?” There’s plenty of economy involved in the band’s early material; the first album runs twenty songs in about as many minutes. On The L-Shaped Man, Ceremony takes the impulse to simplify and uses it for dark luster and tension.

Other things have changed a lot. The The L-Shaped Man’s rollout includes a Ceremony-themed tattoo deal at Blackheart in San Francisco. Noncommittal fans can get inked with “SICK OF ____,” and fill in the blank with classic hardcore bands to dispense with, just like Farrar did back on the pivotal Rohnert Park opener. At Timeless Coffee, where Anzaldo pondered another cup, LPs will be sold with alternate cover art and commemorative Ceremony beans. Not many hardcore bands do that.