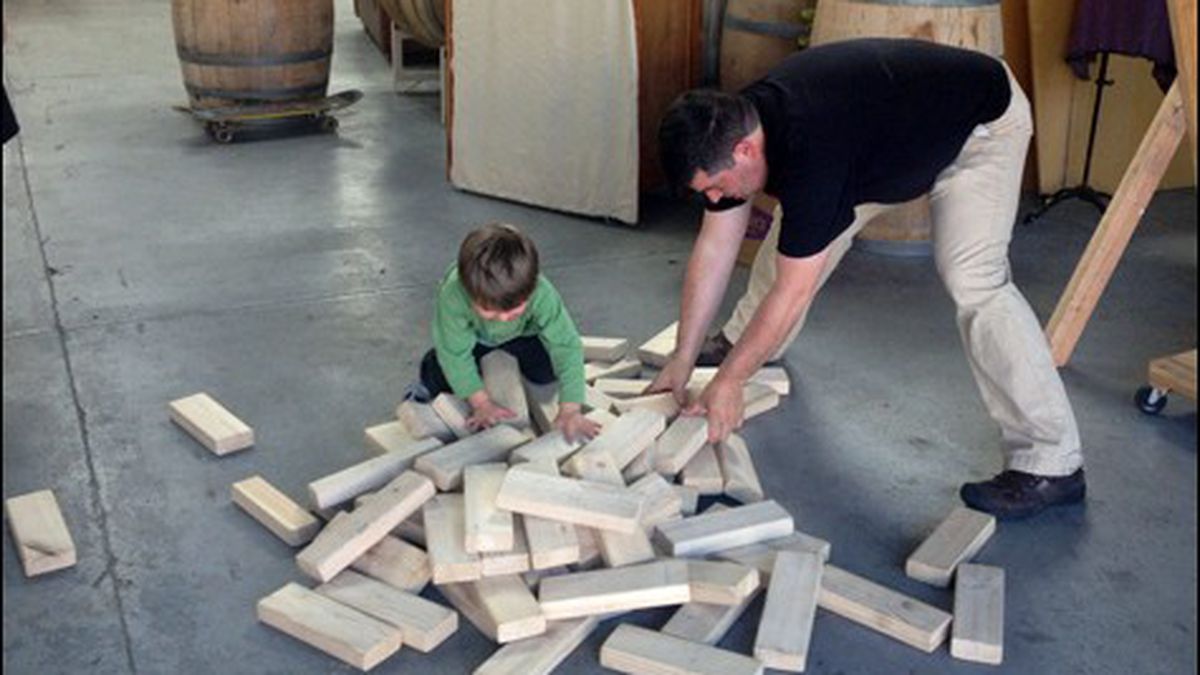 Two Mile Wines’ origin story starts, as all good ones do, with necessity. Specifically: The necessity of a serious wine addiction, and the tragedy of not having enough money to bankroll it. “Basically, we were broke, and we liked really good wine, and couldn’t afford to be drinking really good wine,” explained Bill Bedsworth, standing in what’s now the winery’s tasting room but what was then merely a concept beyond their most ambitious goals.

At the time, he and cofounder Adam Love were both Ph.D students in environmental engineering at UC Berkeley — perhaps unsurprisingly, each of them now has an exceedingly high-powered-sounding day job — with flexible schedules and a decent-enough background in chemistry, so they decided to start making it themselves. At worst, they figured, this could be their everyday wine, thus enabling them to splurge on the good stuff when they felt like it. But, recalled Bedsworth, “as it turns out, we can actually make some pretty good wine.” This, it should be noted right now, is an understatement on both an empirical and experiential level: The company’s Founder’s Rock blend just took gold in Sunset magazine’s annual, ultra-schmancy wine competition, and having now tried that and every other variety, I can definitively say they are all lovely.

Anyway: Their wine got so good that friends and then friends of friends began to ask for it; eventually, a third partner, Adam Nelson, came on board and the three of them decided that the buyer base was there to begin making wine commercially. They made their first official vintage in 2006; now, Two Mile’s wines are sold at bars all over the Bay Area, and they also operate a small tasting room in a drafty warehouse on 25th Street in Oakland.

On a Thursday night, when the room glows warm and inviting with well-dimmed lighting and attractive people — a bracing neo-soul ensemble singing a few feet away; the small space done up nicely in shades of slate and dove; one of those now-ubiquitous supersize Jenga games stacked on the cement floor — this could be Rockridge or San Francisco or even New York: somewhere much fancier and harder to get into, somewhere that’s not run by three guys with lives and kids and day jobs and zero marketing budget. But still, if you look hard enough: The neo-soul ensemble’s playing not because they’re some kind of expensive house band, hired to boost ambience, but because Two Miles shares the space with a bunch of other small businesses and tonight happens to be a Thursday art walk event. The room’s not so much of a room, strictly speaking, as a cutout from the rest of the warehouse, its walls only slightly taller than the tallest person in the room and far, far lower than the actual ceiling. And most of the aforementioned attractive people are here not because they read about the place somewhere but because they’ve found it completely on accident — the happiest kind of accident, of course, the kind where you’re walking along an industrial street and then suddenly find a little jewel-box of a wine shop, one with nice pours and live music.

This is a labor of love that’s managed to be successful enough to occasionally look like a labor of commerce, a weekend hobby that sometimes decides to dress up as a slick wine bar, but which, really, doesn’t have much aspiration to be one. Bedsworth, Nelson, and Love have no intention of quitting their day jobs or hiring other employees; though the winery’s turning a profit on a yearly basis, they’ve calculated that it’ll take upwards of three hundred years to make a return on the initial start-up investment. “Our objective hasn’t been to have a big bar scene here,” explained Bedsworth. “This is just people who love wine making wine … And if it stops being fun, we’ll stop doing it.” It was midday on a Saturday and the place was totally empty, but Bedsworth and Love didn’t much seem to mind. A few feet away, Love’s three-year-old — red-cheeked, energetic, adorable to the point of gratuitousness — squirmed and babbled and played: Supersized Jenga, as it turns out, can be pretty successfully repurposed as plain old blocks.