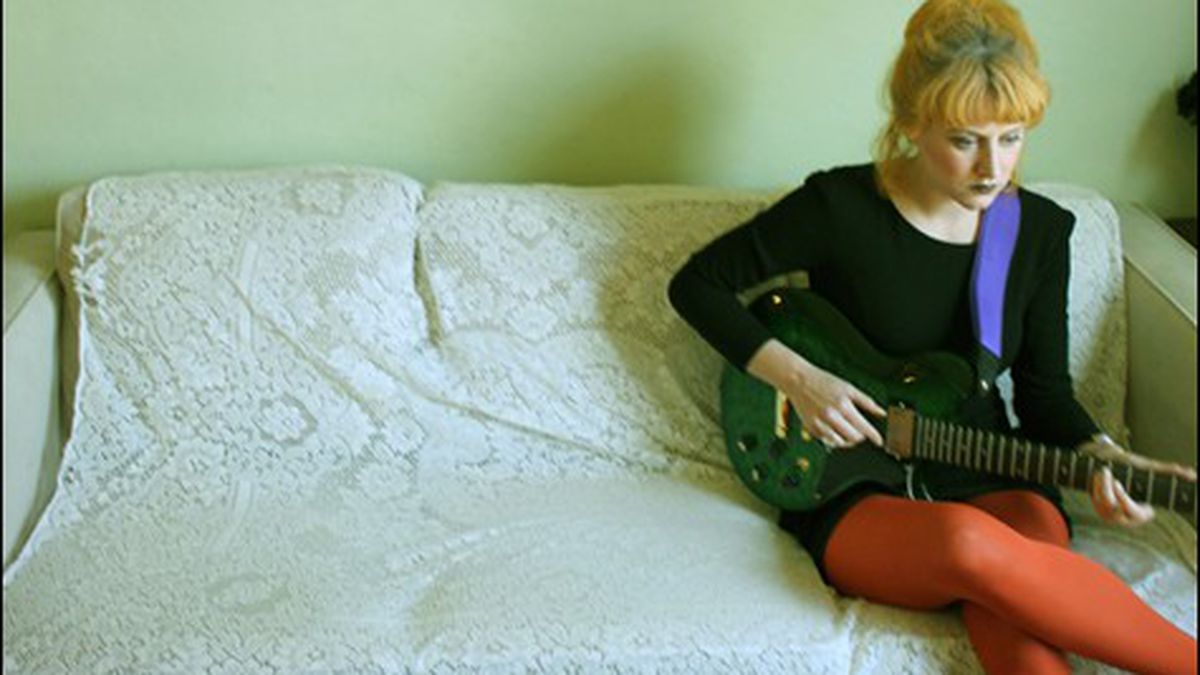 Since Lillian Maring co-founded Grass Widow in 2007, the San Francisco post-punk trio has garnered voluble praise for its buoyant three-part vocal harmonies atop skittish rhythms. Last year, the band toured heavily to support the release of its third album, Internal Logic. But meanwhile, Maring has been quietly grieving. Three years ago, the drummer and songwriter’s boyfriend was diagnosed with advanced cancer. He returned to his home state of Maine, and Maring followed, helping to take care of him while he was in hospice care. That spring, he passed away.

“When you’re living with someone close to you as they die, there’s no way to explain the thoughts you’re having,” Maring recalled recently, over tea in her West Oakland home. “I’ve gotten to a point where I can live with that, but for a long time it felt very unlivable.”

For the 27-year-old musician, songwriting was integral to coping with the loss of her partner. On the first anniversary of his death, she wrote the song “Chameleon.” It’s the lead single on Maring’s new solo album, Ruby Pins.

Maring wrote the songs during a month-long stay last summer in Port Townsend, a small town in Washington about 120 miles north of where she grew up. Using an unconventional home-recording method, Maring produced a mix of glassy, introspective, psychedelic pop songs with an impenetrable, enigmatic atmosphere. Brett Lyman, owner of Portland’s M’lady’s imprint, was so enthralled with Maring’s demos that he offered to release her eponymous debut. It comes out June 25.

A childhood friend encouraged Maring to travel north to record the album. Port Townsend is a bay city with fewer than 10,000 residents, and it turned out to be just the creative environment Maring craved. “I needed a therapeutic process by myself where it was okay to be upset,” she said. “It’s nice to write in your diary, which is what Ruby Pins feels like.”

Maring sublet a room, plugged a sole microphone into her laptop, and began recording each instrument herself. Although she had no money — she recalled having to travel once a week to the food bank, Dumpster-dive behind grocery stores, and become her roommate’s personal assistant in lieu of paying rent — the lifestyle enabled Maring to confront loss in her songwriting. “Grief becomes a part of your life — something that you live with every day,” she said. “I try to turn it into something that propels me to live my life exactly how I want to.”

Maring said the album’s driving themes — mourning and grief — are universally relatable, and she hopes they will resonate with listeners in a way that pop music rarely does. “I wanted to make a pop album that talks about sexual harassment and death, because pop music is a platform where people are willing to listen to you talk about anything, and too many people talk about the most stupid shit over and over,” Maring said.

Maring left her hometown of Centralia, Washington when she was a teenager. She moved to Olympia, and then San Francisco, where she started Grass Widow with bassist Hannah Lew and guitarist Raven Mahon. The trio takes an intensely collaborative approach in which each member has equal creative input. “It’s a mesh and mix of our individual egos,” said Maring. “We made decisions based on whether we’re doing our best to serve the song.”

The collaborative environment also allowed for greater self-reflection. “Having a conversation — there’s more insight,” Maring said, adding, “You can see a lot more of yourself when you have a mirror, and we’re mirrors for each other.”

Yet for Ruby Pins, Maring felt it necessary to be on her own, away from the Bay Area: “I needed to feel a lot of fear and ask a lot of questions that I can’t usually ask myself,” she said. Ruby Pins encapsulates her internal dialogue. In the song “Chameleon,” she expresses denial quite literally, singing, No day is the right day/The time will not come. The song also contains oblique references from her time in Maine: Shadow in house of cedar closets/blanket of smoke.

Musically, Ruby Pins features unnerving instrumentals: Keyboards exchange serpentine melodies with ascending guitar leads while insistent, but minimal, drums throb in the distance. Maring’s consistent phrasing and pitch evoke an image of her singing blankly at a wall, oblivious to her surroundings and lost in her narrative, while double-tracked vocals and effects propel some parts into more overt psychedelia.

But, more than anything, it’s Maring’s ruminations that will entrance listeners, as the questions Maring took to Port Townsend aren’t easily answered. Her ponderous, melancholy songs may provoke us to ask questions about our own past trauma — and maybe find some closure.

Update: Due to an editing error, a previous version of this article incorrectly stated that Port Townsend, Washington is 120 south of where Maring grew up. In addition, a previous version incorrectly stated that Maring’s recording gear was lent by a friend and that Maring was present during the death of her partner. Lastly, Raven Mahon’s name has been corrected from its original spelling of Mohan.

A New Venue for Death Metal

Allow Me to Introduce Myself