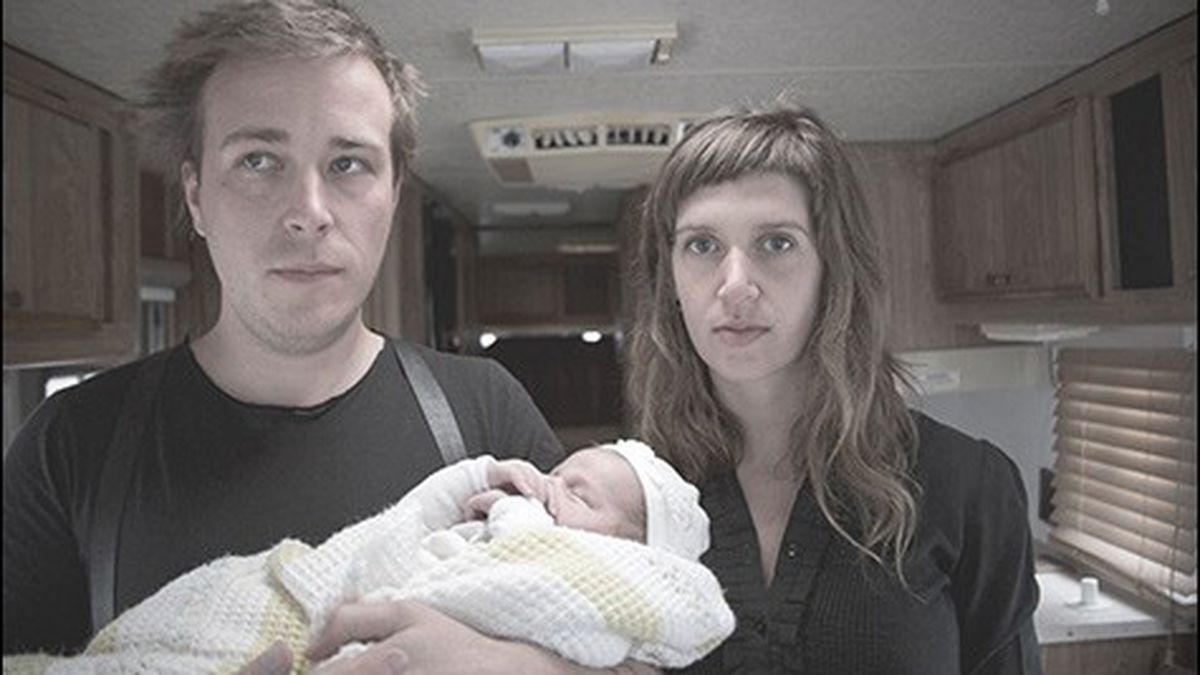 On Valentine’s Day, in a room with concrete floors in Los Angeles’ Echo Park neighborhood, Neil Campau and Ellen Avis played a set of haunting, melodic ballads. The lo-fi duo, known as Electrician, was in the midst of a West Coast tour of punk houses and DIY spaces to promote its new album, Wet and Ripping the Lake in Two, which the band describes as “shadowy, intimate songs about death, destruction, and friendship.” Electrician had been on the indie tour circuit before, but this time, the group had more at stake than just booking spaces and finding places to sleep.

After the two musicians finished their set, Campau, 33, shyly thanked the small crowd, packed up his guitar and keyboard, and dashed out of the venue. Over at the merch table, Avis, who’s also 33, explained why Campau had disappeared. He’d gone to check on Cricket, the couple’s three-month-old son. A friend from one of the other bands performing that night was watching the baby across the street in Electrician’s RV. For the rest of the evening, Avis and Campau took turns rotating between the RV and the venue — a setup they hope to be able to maintain as touring musicians and, now, new parents.

When Campau and Avis first learned they were going to have a baby, they agreed they didn’t want to change their counterculture principles or chosen lifestyle. “We wanted to make sure we were still continuing to do the things we want to do,” said Avis, who, like Campau, is soft-spoken and has a calm demeanor. “We didn’t want to fall into ‘we’re just parents,'” she said. Other parents had told them a good time to travel with a baby is at the three- to four-month-old stage — when the baby is no longer a newborn but also not yet walking. So, Campau and Avis booked a tour for a few months after Avis’ due date. But they knew they couldn’t count on touring in a car, as they’d done before, so they launched an Indiegogo campaign in September and raised $1,770, enough to help them buy a 32-foot motorhome.

Campau and Avis met in early 2012, after Campau moved to Oakland from Seattle, where he’d formed a lo-fi indie-pop project called World History. Not long after starting Electrician with Campau, Avis, a longtime social justice activist and independent arts organizer, left her job in city planning research at UC Berkeley. For the past year, the two have lived in group houses filled with bikes and screenprints and squatted in foreclosed houses while focusing on recording songs and touring. Campau, who writes all the songs for Electrician, has long embraced an itinerant lifestyle, living in a sailboat in Seattle’s Puget Sound and a built-out school bus in West Oakland. Campau records all of Electrician’s albums at his house, covering costs with money made from CD sales and occasional donations to Campau’s website DoDIY.org, a directory of independent music venues around the world.

Campau’s anarchist ethos is clearly reflected in Electrician’s buzzing distortion, layered guitar loops, and sometimes-cajoling, other times-severe lyrics. In “You Can’t Kill Everyone,” the closing track of Wet and Ripping the Lake in Two, Avis plays an uplifting, twangy melody on a keyboard while Campau sings, Everybody dies, and I might just die, and you might just die. In many of the songs, his voice is distant and lilting, every syllable pronounced, and many lines hang in the air, as though in a question.

Back in Los Angeles, Campau and Avis walked to a nearby bookstore/cafe. It was a balmy evening, and Avis bounced Cricket, who wore a handmade floral jumper, on her lap while Campau worked on his laptop. For now, the couple lives off of Campau’s side jobs — selling things on eBay and booking and publicizing bands — and Avis’ savings. In March, they flew to Italy, where they have their biggest fan base, then returned to Long Beach and continued their tour up the California coast. They’re adding show dates all the time, and plan to spend the summer touring the Northwest.

A typical day on the road begins with the search for coffee, then playtime with Cricket until his midmorning nap, at which point they inevitably have to run an errand or deal with a mechanical problem with the RV. Then they drive to the location of their next show, or find a cafe or other place to escape the midday sauna inside the motorhome. They rarely encounter other musicians touring with kids, but at every show they’ve played, someone has always volunteered to stay with Cricket during their set. Avis said they tried putting sound-eliminating headphones on him so he could stay in the venue while they played — which is always a house venue or all-ages space — but it was still too loud for him. When asked how she could tell that he didn’t like the noise, Avis looked at Cricket and said she just knows.

On the walk back to the RV from the coffee shop, Campau and Avis talked about having a baby within a counterculture scene. Campau said that while they have anarchist friends who’ve had babies, most of his peers subscribe to nihilism, and Avis admitted that a lot of her friends are “anti-breeding.” “We haven’t been given a hard time,” Avis said, “but we haven’t gotten much support from them, either.”

As to whether choosing to have a baby within an anarchist framework is itself a radical act, Avis said she’s not sure. Mostly, she’s excited to see Cricket develop his own worldview and to be “as free and have as much fun as possible” — just as she and Campau are trying to do. “We’ll see how it goes,” she said.

Back in the RV, Campau settled Cricket into his car seat, set a small speaker between the infant’s chubby thighs, and turned on an iPod. “Jens Lekman is his favorite,” Campau said of the Swedish singer whose lush melodies, backed by bells, whistles and flutes, lull the baby into near sleep. Campau remembers his own relationship with music when he was growing up. “I was in the church choir since third grade, and we used to go to church six days a week,” he said. After going on to study classical singing in college, Campau realized he didn’t like the way his voice sounded. “My voice sounded good to a lot of people but it didn’t feel like me. I blended in really well with the choir.” He spent several years trying to distance himself from the choir and unlearn his operatic training, by listening to singers with deeply emotive voices, like Willie Nelson.

In their home on wheels, Campau and Avis seemed as far from the choir as possible.