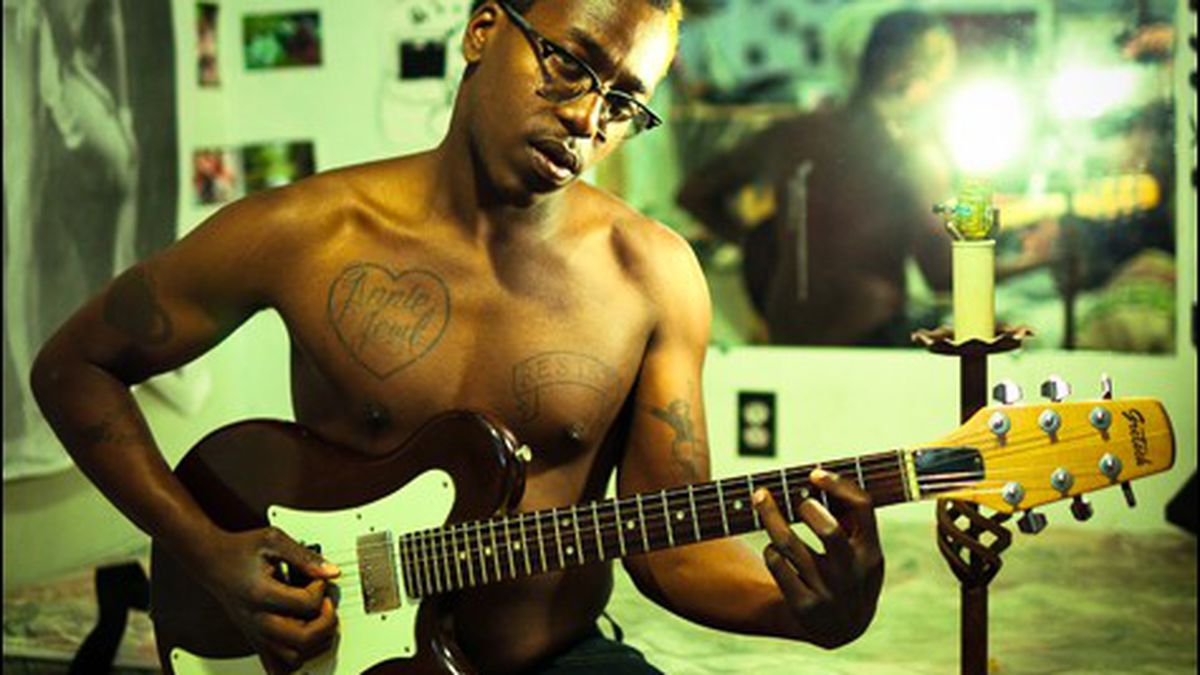 In past lives, Brontez Purnell has been many things: a closeted, landlocked punk kid stuck in rural Alabama; a couch-surfing, perpetually broke West Oakland warehouse rat; the exhibitionist crown prince of the local queer party scene; and one of the more spirited members of the notoriously energetic Oakland electro-schlock outfit Gravy Train!!! In the future, if there’s any justice in the world, he’ll be famous — or at least find someone to distribute his new record. But right now, the indefatigable frontman of The Younger Lovers is sitting in a pastel-colored booth at Home of Chicken and Waffles and pondering his hair, which he’s about to dye half-blond.

“I’m about to spend hella money on my hair because I’m depressed,” he offered, both as explanation and as a veiled reference to yet another facet of his identity, albeit a new one: involuntary poster child for circa-2011 intolerance, as the victim of an alleged, well-publicized gay-bashing outside a club in Oakland. Legally, he can’t discuss the details, but he promises he’s doing okay. “I just want to get, like, a crazy, hella new-wave hairstyle, though.”

But first, lunch: six strips of fried chicken, a fluffy, butter-topped waffle roughly the size and shape of a Frisbee; ranch dressing; barbecue sauce; and a side of cheesy grits (swapped out for the typical candied yams, because when it comes to soul food and just about everything else, Purnell is a person who knows what he wants) — plus an extra-large glass of water, requested specifically as antidote for Purnell’s pounding headache. “It tastes like diabetes!,” he said, gleefully, after an impressively large first bite. Hungry, hungover, still recovering from a violent attack, and admittedly depressed, Purnell has more happy energy than approximately 99.9 percent of people in the universe. It’s infectious.

The energy — not to mention the love of music and the affection for fried chicken and grits — appears to be innate, or at least the built-up product of growing up punk, gay, and bored in Triana, Alabama, population 498. Though Purnell remains close to his family and still misses the South, it’s understandable why he’d want to get out. At twenty, he decided to drive to Oakland out of what sounds more like sheer desperation than any well-defined sense of purpose. The farthest west Purnell had ever been was Arkansas, but he knew a few people in Oakland— through friends of friends, or because he’d traded ‘zines or mixtapes with them when he was back in Alabama — and quickly fell into the DIY and queer scenes. Hard. “I was a party kid, basically. I think I hit every party in SF and Oakland in 2002,” he said. He played in the bands Panty Raid and Veronica Lipgloss, published a ‘zine called Fag School, and showed up on the cover of the Bay Guardian half-naked and covered in leaves. He spent so much time ripping off his clothes and going crazy in the pit at Gravy Train!!!! shows that he was eventually invited to join the band; under the stage name Junx, Purnell typically performed in nothing more than a pair of tiny tighty-whiteys, and was once kicked offstage at a show in Tuscon for being too naked. “Gravy Train!!!! was a crazy experience,” he recalled.

No shit. Gravy Train!!! is, after all, one of the objectively crazier bands to come out of the East Bay, at least in recent memory: a totally spastic, super-gay, super-explicit, exclamation-point-happy electro-punk-dance outfit that somehow managed a surprising degree of local and even national fame — despite its subversive source material, and probably largely because of its frenetic, sweat-soaked, beer-drenched live show. It’s easy to see why Purnell fell into it, but it’s also easy to see how being a part of that could put a certain degree of pressure on a newly-transplanted baby gay. “I kind of don’t see how I made it out of that alive,” Purnell said. “Like, I get physically exhausted just thinking about it — just being that kinetic, and also being that wasted on top of being that kinetic. Boys used to pull my underwear off, finger me in the pit — it was kinda hella intense.”

He continues, now halfway through his plate of chicken and showing no signs of stopping: “And at some point, I got older and I just wanted to go out onstage in my normal clothes and play music. I just couldn’t be Junx the superteen any more.” When frontman Hunx split off to form Hunx and His Punx and Gravy Train!!! began, amicably, to fizzle, Purnell returned to his punk roots with The Younger Lovers. The band’s first LP, Newest Romantic, released in 2008, was skuzzy, chunky, and about as far from electro as you can get — but even that was only a brief stop on his evolution. “The first album was just me trying to be all punk, but the truth is, my ideal is always to make a rock ‘n’ roll record that you can get stoned in your room and dance to. Which some people might not think is a lofty goal, but it’s crazy how many people just can’t do that shit.”

He’s got a point. And if anyone’s ready for the task of making punk music feel danceable, it’s someone like Purnell. First and foremost, there’s that unbridled energy. Recorded, it manifests itself in half-yelled lyrics and a distinctly visceral energy; onstage — as at The Younger Lovers’ recent show at the Stork Club — it’s mostly untrammeled wailage on the drum set. In both instances, Purnell’s got an instinct for showmanship that’s all too often hard to find in the punk world. He’s also got a rare gift — and a respect — for rhythm, which he attributes to a background in dance: when recording, he always starts with the percussion tracks first, before moving on to bass, guitar, and vocals. (Though he plays with a live band, Purnell records alone: “I’m too much of a dictator asshole bitch for others to deal with.”)

On Rock Flawless, Purnell — along with producer Matthew Melton of Bare Wires — moved away from Romantic‘s straight-ahead punk riffs, swapping them for melodies culled from new wave, soul, and, especially, Sixties girl groups — though, Purnell is quick to point out, ones more skewed toward the pleading roughness of The Marvelettes over what he describes as the “glamour-dazzle” of The Supremes. So while Newest Romantic was Purnell’s means of proving his punk bona fides, Rock Flawless is something more evolved — and in a way, more honest: a rock record that’s not so concerned with being hard-edged that it’s afraid to be fun. And where Gravy Train!!! trafficked in a sort of shlocky adolescent raunch, lyrically speaking, The Younger Lovers are all about romance, with song titles like “No Flowers in Springtime” and sweetly sincere lyrics about lonely nights, long-distance relationships, and boys who lie. The result is about as close as you can get to garage-rock earworm.

That transition hasn’t necessarily been easy. “When I was naked and drunk and going crazy for people all the time — there’s definitely an audience for that,” he said. “But the second I was, like, actually, I just want to write songs about these boys that I’ve really loved — or boys who I didn’t really love, or not being able to pay rent, or having a fight with a friend — the second I do that, it’s not so shown. It’s too, like, low-concept or something.” He’s still looking for someone to distribute Rock Flawless; right now, it’s largely getting out through Purnell himself, accompanied by a tracklist that’s handwritten and Xeroxed on notebook paper, signed with a cartoony-looking heart and the signature “Bronny.”

But for all his protestations, it looks like there’s an audience for the new Purnell. Or at least there was at the Stork, where a knot of fans cheered the band through a quick, combustible set that managed to inspire — yes! — dancing, even among the mowhawked punker dudes. The new hairdo looked fly as hell, and Purnell was magnetic onstage. He arrived in a T-shirt and sweatervest and remained clothed the whole time, but no one seemed to mind.

Are Oakland Schools Moving too Quickly on New Funding Plan?

Fat-Bottomed Girls at the Candy Shop