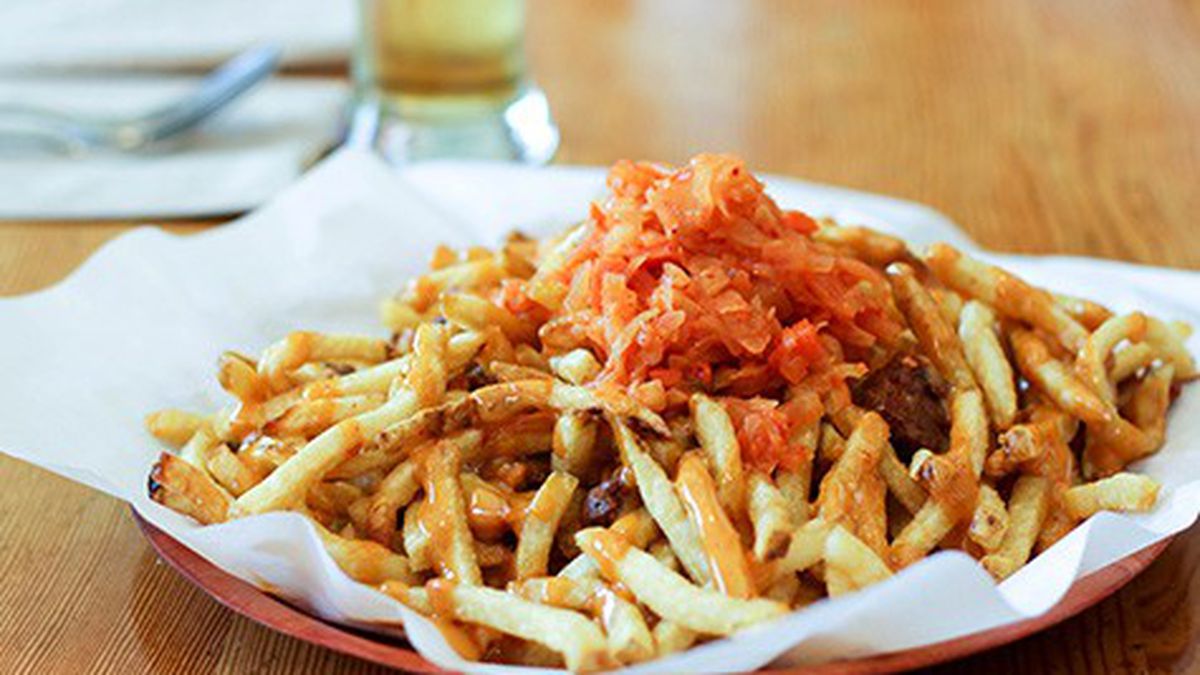 French fries are, of course, the ultimate finger food. But there’s something oddly satisfying about having to eat your fries with a fork, especially when they’re lathered in something delicious. It’s not an experience for everyone — French fry traditionalists, feel free to stop reading — but for those who care to liven things up, here is an eclectic list of five elaborate fry concoctions that East Bay foodies should try.

The Half Orange’s Salchipapas

Salchipapas is a Latin American fast-food dish that involves French fries, sliced sausage, savory coleslaw, and a ketchup-y sauce. Fruitvale’s new sausage spot, The Half Orange (3340 E. 12th St. #11), offers a version of the dish that harnesses that blend of salty, meaty goodness — with an added international twist. It starts off with a base of thin-cut fries done so they’re just a bit lanky — not too stiff. On top, you get chopped-up pieces of a specialty house-made sausage with kimchi spices mixed in for a vinegary kick. Along with that, you get the house-made chorizo, melted cheddar, special sauce (think a classic special sauce recipe but with miso instead of ketchup), and perfectly pickled house-made kimchi. The fusion of flavors is so seamless, you’ll think Korea and Peru were neighboring countries.

The Love Boat at Liba Falafel (380 17th St., Oakland) is a fresh response to the classic, cheesy fry nest. Its base is a bundle of thick yet crispy sweet potato fries perfectly salted so they don’t have that overly sweet aftertaste. These are then covered in garlic and sprinkled with Liba’s exquisite, crumbled up falafel balls. To top it off, you also get Liba’s house-made harissa and raita sauces, which bring the whole dish together in a pile of savory, citrusy sweetness. Each element provides a nuanced range of flavors, so together they make a remarkably varied dish that doesn’t begin to bore you when it’s halfway done. I won’t argue that it’s not decadent, but it tastes (and feels) lighter than most hefty fry indulgences, and its vegetarian.

As a Mexican/Korean-fusion spot with Southern California roots, Belly’s (1901 San Pablo Ave., Oakland) menu is rife with fries — not only in the burritos, but in the tacos, too! So, naturally, Belly offers a dish that features fries as the centerpiece, the aptly named “Cali Fries.” It starts off with chewy, thin cut fries, piled high. Then you get a load of Belly’s incredibly flavorful, bulgogi-marinated steak. Mixed in to that is stringy cheddar cheese that you might initially wish was fully melted until you realize you appreciate the lighter texture. On top of that comes a plop of chunky pico de gallo and a huge scoop of guacamole. The highlights of the dish are the corn salsa, which adds a juicy crunch to the decadent mountain, and the perfectly balanced sauces made specifically for this dish: a Mexican crema base brightened with a mixture of Asian spices and a sour cream sauce with citrus and cilantro. These fries are a satisfying meal in itself.

This one is a bit of a curve ball, reserved for the fanciest of fry eaters. Fries can sometimes seem out of place in dimly lit restaurants, but throw them atop a steaming pool of garlicky, mussel-filled tomato broth, and they fit in just fine. MUA’s (2442 Webster St., Oakland) appetizer is a generous bowl of steamed mussels that comes haphazardly topped with a pile of skinny fries — the perfectly seasoned and soft-on-the-inside kind. And those come covered in a creamy aioli. It’s a definite deviation from the usual fries-with-shit-on-top dish, but it’s clear that the organization of layers has been well-thought-out. As you dig through the treasure trove of shells, the fries gradually fall into the broth, and begin to soak up the savory soup. But if you take too much time, your fries will turn into a soggy mush. And that would be an incredible shame, because the dish costs a whopping $19.

The “Guilty Fries” aren’t about refined flavors. (Most fries aren’t, but especially these.) The Tribune Tavern (401 13th St., Oakland) appetizer is a platter of thick-cut frites topped with pulled pork and smothered in fondue. That’s it. The pork is plentiful and the cheese is incredibly thick. Together, they form a disgracefully rich challenge suited for the recently dumped, the overworked, or the just plain drunk. The pulled pork is what brings the dish together, adding some texture and brightness. But the fondue is what sets the dish apart from others like it, because it’s not trying to be anything other than what it is, a velvety indulgence. You may go in thinking that the “guilt” is referring to calories, but by the end you’ll realize its more about feeling ashamed that you so thoroughly enjoyed such a mess of smoky richness without wishing it was any more elegant. Just own it.