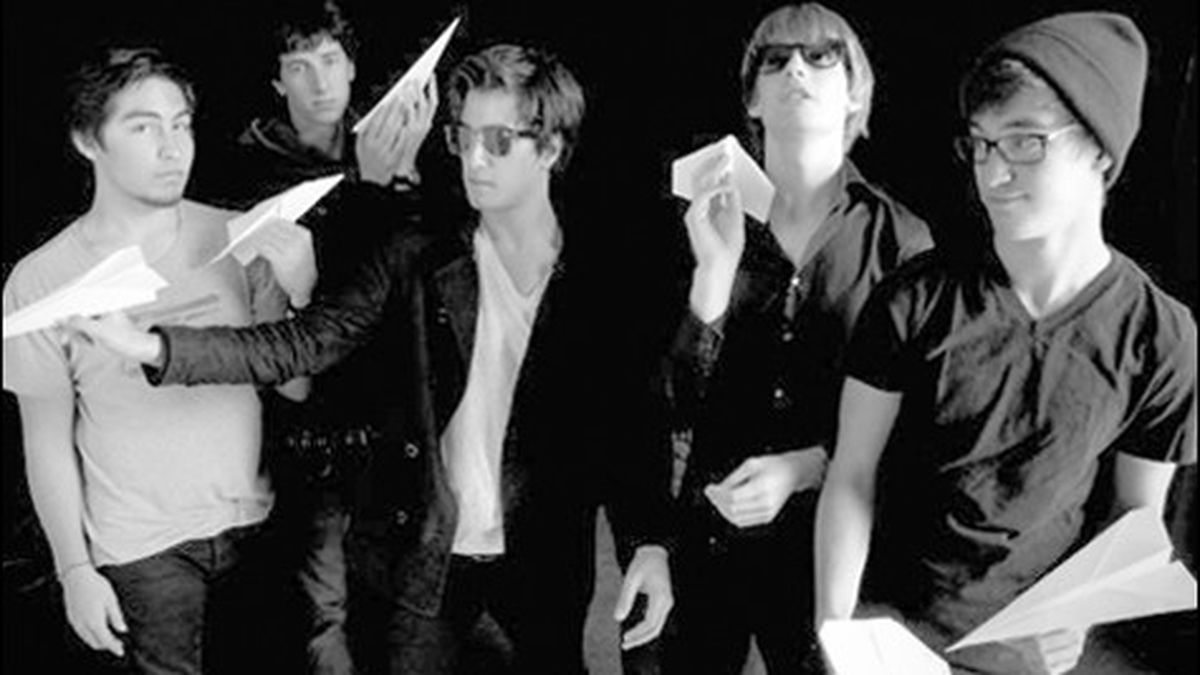 Alameda High indie-poppers are just trying to contain their excitement.

The members of Finish Ticket cannot stop talking — about their fans, about the last show they played, about the pizza they’re eating, about anything, really — and though they speak with the elliptical semi-murmur of most teenage boys, their sheer giddiness at being the subject of a newspaper interview is palpable. In e-mail and in text messages, nearly every one of their sentences ends with an exclamation point. The liner notes for their second EP, Shake a Symphony, contain the kind of heartfelt appreciations of their families, friends, and fans that many teens wouldn’t be caught dead writing, let alone publicly.

In other words, they are exactly as excited and exactly as earnest as musicians in their position should be. After just two years, the quintet — vocalist Brendan Hoye, his twin brother and bassist Michael Hoye, guitarist Alex DiDonato, drummer Garren Orr, and guitarist Chris Arellano, all freshly out of Alameda High — has managed to turn the typical suburban garage band trope into something bigger and more real. They’ve garnered a considerable fan base, played a few high-profile shows (most recently, Live 105‘s Not So Silent Night) and fallen in with a lineage of local bands who’ve been willing to act as mentors. They are, in every way, on the verge of something, personally and professionally. Each of them is in his first year of college (except for DiDonato, who is a sophomore), and as a band, they’re at that crucial juncture between being purely amateur and making an honest go of it. Sitting in the wood-paneled pizza parlor where they had some of their first meetings as a group, it’s clear how utterly exhilarated — and slightly afraid — they are at entertaining that idea.

Finish Ticket started early, in middle and high school. It actually generated from two bands that came together as what DiDonato describes as “a Brady Bunch kind of thing.” The band played wherever it could: public libraries, biker bars, and, once, a metal show (“we were like these skinny little indie kids playing with a band — I think they were called Hemmorrhage,” Michael said. Suffice it to say, the band was out of place.) In the course of the last couple years the members financed three EPs by doing chores around the house for their parents. And they amassed a following, first among family and friends at Alameda High, and then, slowly, beyond.

Along the way, they honed in on an aesthetic that draws inspiration from alt-rock chart-toppers like Coldplay and The Killers. It’s the kind of inoffensive indie-pop that’d be comfortably at home on a broad swath of radio stations. But while many young bands might be inclined to self-consciously push the envelope, these guys are entirely at peace with their pop influence. “I love the construction of a pop song,” Brendan said. “I think that s the most successful way to structure a song.”

The band’s intuitive sense of composition informs many tracks on Shake a Symphony. Its stuff is preternaturally good, with glimmers of being truly great. The thrumming, adolescent build on “Rivers” is barely surpassed by the swooning surf guitars on “Evil’s Eye” from the band’s second EP, Life Underwater.” Not to mention that Finish Ticket’s lyrics show irresistible, wide-eyed optimism: We’re in an open sea of possibility, resolution/Open your eyes, and see the world in front of you, they sing in “We’ll Be Okay (Part II),” a particularly bubbly track from the latest EP.

Finish Ticket learned the craft from newly retired local band called Dizzy Balloon. The similarities between the two groups are uncanny. Both paid their dues locally, endured the condescension of adults both within and outside the music community, and had to figure out how to appease their fan base — composed largely of teenage girls, not quite the most credibly discerning bloc of music fans out there — while still being taken seriously. After Dizzy frontman Petros A.P. blew off Finish Ticket a couple times (by his own admission), the two groups eventually started playing together. Now, Alex and Petros live together in Santa Cruz.

Despite now being scattered at five colleges on two coasts — UC Santa Cruz, UC Davis, Cal Poly Pomona, Emerson, and Berklee College of Music — the members of Finish Ticket are still trying to make it work. They’re not quite ready to follow Dizzy Balloon’s lead and take time off school, even if balancing schoolwork and their newly divergent social lives with the band is exhausting. Instead, they throw shows whenever they can, usually during school breaks. Earlier this month they were forced to campaign for the coveted local opener slot at Not So Silent Night in the midst of cramming for their first-ever college finals. They won — just like Dizzy Balloon did in 2008 — and found themselves opening for The Smashing Pumpkins, Phoenix, and My Chemical Romance at the HP Pavilion. Recounting the story, Alex gets so excited that he’s almost incomprehensible.

This week, Finish Ticket will open Dizzy Balloon’s final show, as its predecessor has decided to break up in order to pursue various side projects. The symbolism isn’t lost on anyone. “Those guys have come a long way,” Petros said. “I guess it is sort of a passing-the-torch thing, in a way.”

“They played at my first local show, at Bottom of the Hill,” Michael said. “I always dreamed of opening for them.” And then, without even the faintest hint of irony: “I guess it’s just really cool to see dreams come true.”