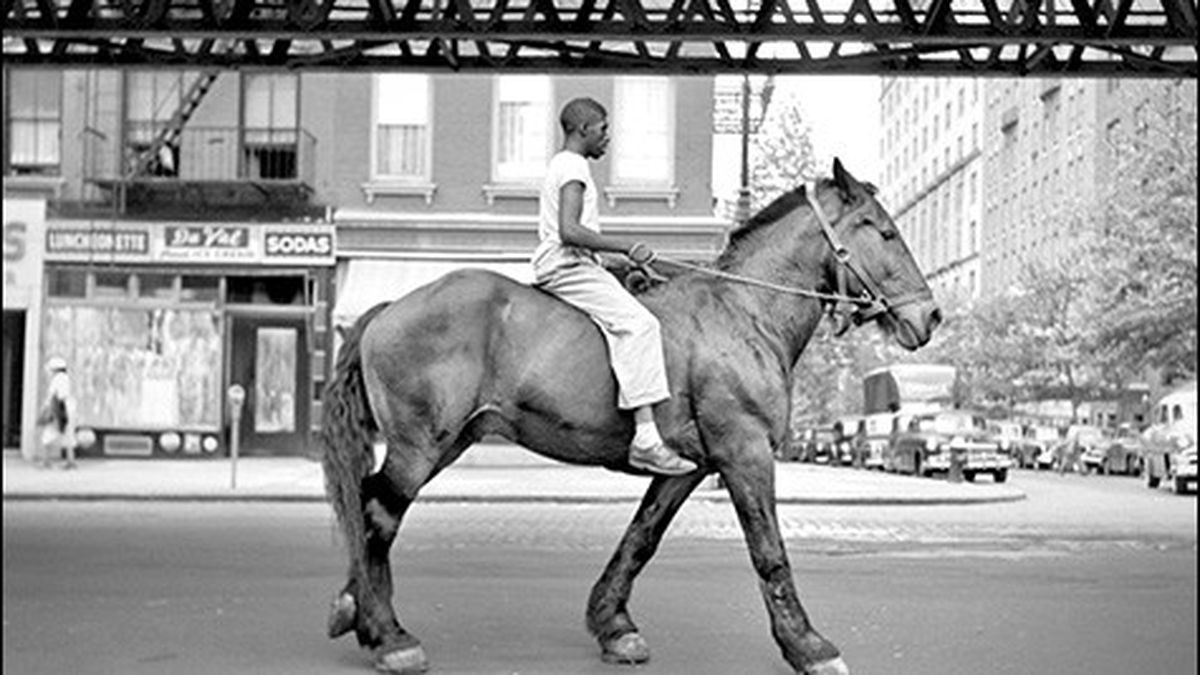 There’s something tantalizing and romantic about buried treasure, particularly in the world of visual art. Everyone would like to find a French Impressionist painting in a dumpster or pick up an Andy Warhol at a garage sale for ten bucks, with a set of ashtrays thrown in. But what if the masterpieces are by an unknown photographer who locked them away for fifty years? Consider the tale of John Maloof, the protagonist — although not exactly the subject — of Finding Vivian Maier, the new documentary he directed with Charlie Siskel.

Chicago photographer Maloof bought a boxful of negatives at an auction, and what he saw when he scanned them was a revelation. The photos — which he bought to fill out a book he was working on — turned out to be a series of stunning black-and-white candid photos shot on the streets of New York and Chicago in the 1950s and ’60s by a woman named Vivian Maier. In the estimation of Maloof and some of his photographic peers, Maier’s work was as assured and authoritative as that of the very finest street photographers — artists such as Robert Frank, Diane Arbus, Henri Cartier-Bresson, and Arthur “Weegee” Fellig.

Maloof immediately bought up all the Maier photos he could find. In a storage locker scheduled to be cleaned out, he rescued a leather trunk filled with hundreds of undeveloped rolls of Maier’s film, along with myriad personal belongings such as dry cleaning receipts and hats. Maloof virtually cornered the market on Maier: some 100,000 negatives, slides, and prints, in black-and-white and color, plus a trove of 8mm and 16mm home movies.

But learning the personal story of this unheralded “genuine shooter” proved more difficult. New York City native Maier, who died in 2009, evidently spent most of her life as a nanny and caregiver in Long Island and the North Shore suburbs of Chicago. She was an intensely secretive person known for her eccentricities (severe hairstyle and clothing, “fake-sounding” French accent, obsessive hoarding), and her photographic forays are the stuff of legend among her former employers — an eccentric group even in their own right. Sometimes she would park the kids on a street corner to chase down subjects. She took numerous self-portraits but, as with the rest of her oeuvre, she showed them to no one. She told one of her “children”: “I’m sort of a spy.”

None of Maier’s quirks would matter if she weren’t so good. One art expert lauds the “sense of tragedy” in her disconcertingly intimate portraits of winos, accident victims, crying babies, and ordinary city folk. The Rolleiflex cameras and Tri-X Pan film she used, favorites of newspaper fotogs of that era, could bring out the individual pores in a weather-beaten face. In the words of one admirer, she possessed the “gregarious solitude” of true photojournalists, with a social conscience that favored the poor and marginalized.

If the documentary occasionally has the flavor of a promotional reel, that’s because Maloof is on a mission to bring this reluctant artist’s work to wider attention with his Maloof Collection, which comprises roughly 90 percent of Maier’s work. According to Maloof, museums are reluctant to acquire Maier’s photos, but a quick visit to VivianMaier.com should put her body of work into sharp focus. In the meantime, Finding Vivian Maier will open your eyes to a rare talent.

Best Place to Buy and Rent Board Games