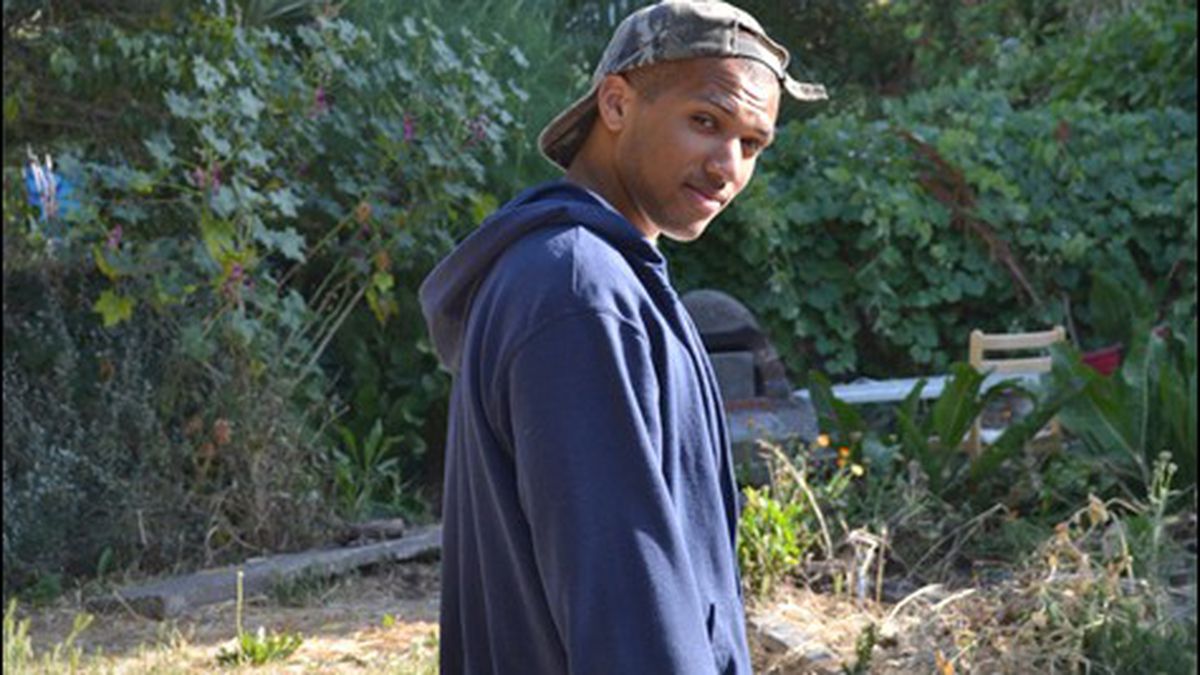 Filling in the Space Ghost

Meet Sudi Wachspress. Have him repeat the name a few times, then spell it. Hang around long enough and he’ll tell you that there’s pretty much no other name like it, for obvious and not-so-obvious reasons. The surname is Jewish; after the Holocaust, he said, there were very few Wachspresses left. But these days, Wachspress is better known by a different moniker, albeit one that’s a little more run-of-the-mill: his producer handle, Space Ghost.

On a recent Friday evening, Space Ghost was mixing a new song, his studio monitors projecting the drums out the window of his attic room on 38th Street in Oakland. His room sits at the top of a dark staircase and looks cramped, with slanted ceilings and electronics stacked on a small shelf. Space Ghost spends his days in the summer doing maintenance work at the California College of the Arts campus, where he’s been going to school for three years. On this particular day, a Brooklyn label called Astro Nautico was releasing his debut LP. However, he spent most of the day painting fences. He was tired from working out in the sun, but when he got home, he was back to making beats, as always.

A few years ago, Space Ghost wasn’t doing much more than experimenting with sounds, mostly using Ableton Live, the powerful German-built sampling and sequencing software. His first foray into making beats came together in a digital package of eleven songs, which he simply called Wallflower. He ran his own humble publicity. Wachspress would find himself on a couch at a party, instinctively plugging in his iPod and sandwiching a few of his own tunes between his favorite artists. “Who’s this?” people would ask. The easiest answer: “Space Ghost.”

Word-of-mouth amounts to a slow build, though. A few downloads here and there from MediaFire, a Twitter handle, and a Bandcamp profile gave Space Ghost an official presence, and then in April 2010, The Fader wrote a glowing few paragraphs about Wallflower out of the blue.

“I still don’t really know how they found me,” Space Ghost said, chuckling uneasily. “I even e-mailed the writer to say thanks and he didn’t respond … but I think they thought I was, like, some big deal in Oakland, and that somehow they had missed [the reality].”

Wachspress is stoic, with a uniquely placid confidence — anxious undercurrents only emerge in wisps. Ask him about school or work, and he doesn’t have much to say. Ask him about how to isolate a drum hit, though, and he’s off and rolling.

The positive press helped Space Ghost’s name recognition, but otherwise didn’t produce tangible benefits. More than anything, it made Space Ghost take his productions more seriously. Wallflower was good, but his next few EPs, which he made available for free, were exponentially more absorbing.

“I don’t think I’d be working at it so hard if I hadn’t gotten that recognition early on,” he admitted, still gazing at Ableton’s sequencer and flipping through old songs. If he’s near technology, odds are he’s thinking about making music, and it seems unlikely that he ever shuts down his computer.

“I basically carry my laptop everywhere with me, and whenever I have a chance I work on stuff — at school, on the bus, wherever.”

When you hear his new LP, You’re There, it’s hard to believe that any of it could have been composed on AC Transit. The songs are completely antithetical to an East Bay bus ride: There’s no pavement, no abrupt starts and stops, and no gravity, even.

Space Ghost has become a master of the creeping beat. A derivative equation would go something like: Toro Y Moi meets Chopped & Screwed over production techniques of equal parts Los Angeles and the UK. He loves water sounds; when it rains he takes his microphone outside and records it. Much of You’re There sounds like a rainforest on another planet, where animal chirps are bizarre and unidentifiable, the trees are looming exotic varietals, and the only familiar element is dense, swirling moisture.

But Space Ghost is the first to admit that there’s no real nailed-down “Space Ghost” sound. He has a hard time listening to Wallflower and subsequent releases such as Pyramid Dreams and FSCK. “When I finished Pyramid Dreams, I tried to go back and make more stuff like it, but I couldn’t. I’m just in a totally different place now.”

The sound he’s arrived at with You’re There, though, feels like an arrival, and a proper debut. “It’s definitely the most cohesive thing I’ve ever done,” he said proudly. The album is sprinkled with a new format for Space Ghost — more ambient adventures without a clear verse-chorus structure. If you’re into adjusting music to appease a certain mood, tracks like “No Phone” will hit the spot.

Space Ghost wears his influences on his sleeve, and he’s not afraid to admit when he’s getting inspiration from artists such as James Blake, Shlohmo, or Mount Kimbie. In fact, once you get him talking, he’ll show you that those artists are actually ingrained in the DNA of his music.

To illustrate, he opened a track by Mount Kimbie on his computer: “Almost all the synth sounds on the album are taken from this one song,” he said. He played the first three seconds — a single tone — and paused.

“Yeah, I just used that one little blip and turned it into my own synth for, like, 70 percent of the album,” he explained. Indeed, You’re There holds together so nicely because Space Ghost is using a few discrete sounds in wildly different ways, pitching them up and down, mixing and matching effects and patterns, and augmenting the tracks with his own voice.

If you didn’t pay close attention you might not realize that Space Ghost is a singer, too. In fact, the vocals on such tracks as “Sneaky/Sensual” are almost all his. He favors multi-tracking to get a smooth, full sound. When asked if he’ll do more singing, he paused for a long time. “I’m working on a new project actually, with my friend Avery, but we’re just trying to get more tracks together right now.” The Avery he’s referring to goes by AHYVE, a standout member (along with Space Ghost) of a tight-knit, prolific Bay Area urban art collective called Ontask Family.

Space Ghost pulls up a few files. He plays the first track, a song he produced, featuring his vocals and Avery’s rapping. AHYVE is an idiosyncratic rapper and fun to listen to, especially when pitched down a few steps the way Space Ghost prefers. Space Ghost’s vocals are superlative. That’s not obvious when you meet the real-life Sudi Wachspress. He’s a quiet guy who spends a lot of time in an attic. Perhaps the name “Space Ghost” is apropos after all.

Three Days in July: On Why Racial Justice in America Shouldn’t...

Yusuf Bey IV Is an Idiot

Grand Jury Report on SWAT Training Exercise Got It Wrong