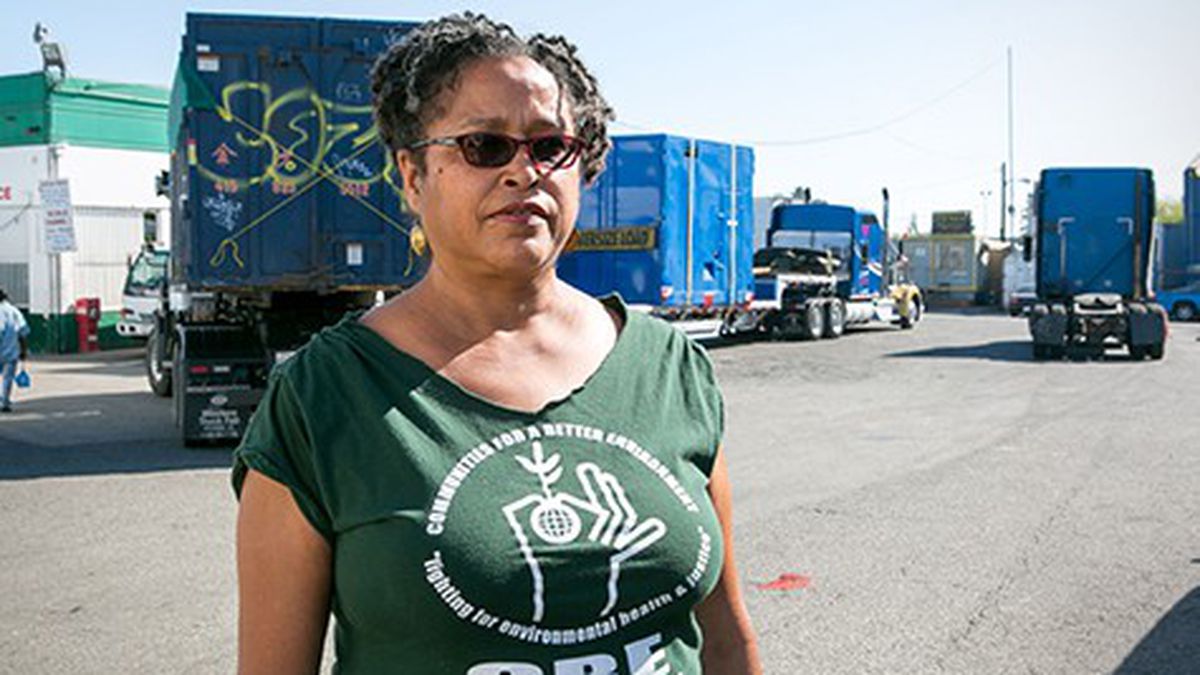 Activists led a successful campaign to reroute diesel-spewing trucks away from residential streets.

East Oakland residents suffer from some of the most polluted air in Alameda County, but they will soon breathe a little easier thanks to a successful years-long campaign to get big-rig trucks off local streets. Last month, the Oakland City Council passed a comprehensive plan to reroute trucks away from residential streets in the neighborhoods around the Coliseum — the first revamping of the area’s truck routes in more than fifty years.

Wladimir Wlassowsky, manager of the city’s Transportation Services Division, said the efforts by community members organized by Communities for a Better Environment (CBE) were “the primary reason” why the council approved the rerouting plan.

The change in truck routes was “an important step in addressing the multiple sources of pollution in East Oakland,” said CBE organizer Nehanda Imara. On some streets it will make a big difference for local residents, she said. However, she cautioned that “there will still be trucks going up 98th Avenue because there’s no other way to get from [Interstate] 880 through East Oakland.”

Earlier this year, however, residents won a commitment from the city planning department to make long-term plans to separate pollution sources in East Oakland from homes and schools. After months of advocacy by community members, the city included that commitment in its development plan for the Coliseum area, and Imara said the process is moving forward.

In CBE meetings eight years ago, East Oakland residents identified air pollution as a major problem — their kids were more than twice as likely to be hospitalized with asthma as others in Alameda County. So they started researching where the pollution was coming from, using methods developed by the West Oakland Environmental Indicators Project.

Longtime CBE member Maxine Oliver-Benson said they first “went out with GPS devices” to map sources of pollution — trucks, factories, and auto repair shops. Next, residents mapped specific types of emissions, both toxic chemicals and the tiny particles that travel deep into the lungs. “About seven of us did a two-day training,” said Oliver-Benson. They learned to use the devices that measure each type of pollution, as well as methods for recording and compiling the information. “A lady from the EPA came out and trained us,” Oliver-Benson said. “She was surprised at how high our numbers were. It was wonderful to understand how to read all that and know what the numbers mean.”

Data in hand, the neighbors decided to focus on diesel pollution, from both truck traffic and trucks that sit idling. “Diesel exhaust is linked to asthma and other respiratory diseases, cancer, premature death, heart attacks, and premature birth,” wrote CBE researchers in a 2008 report, and “diesel particulate matter is among the most toxic air pollutants.”

“When we decided as a community we did not want these eighteen-wheelers driving through our residential areas, we decided to map them,” said Oliver-Benson. So in 2010, she and other CBE members organized another research effort, fanning out across the community to count the trucks on each street and identify places with a concentration of people especially vulnerable to air pollution, such as schools, libraries, and childcare and senior centers.

Joining neighborhood volunteers was a squad of teenagers, including Britteny Jackson, who participated as part of the mayor’s summer jobs program. “I sat and counted the trucks and the number of axles on the trucks. There were about a thousand trucks a day coming down San Leandro Boulevard,” Jackson recalled. “It was a good experience. I loved doing it and learned more about the community. I didn’t know the trucks were polluting the air I was breathing.”

CBE compiled the results in another report and brought it to East Oakland Councilmember Larry Reid. Imara said Reid “championed” their initiative, and his office contributed some of the funds it had available from the county’s Measure B transportation money.

With additional funding from Oakland’s former redevelopment agency, “we had about $100,000 to hire a consultant,” said Wlassowsky of the city’s Transportation Services Division. “We realized the truck routes were created in the Fifties, so it was really good to have the money to do a thorough study.”

His department convened an advisory group with representatives of the community, the trucking industry, the Alameda County Public Health Department, and the Port of Oakland to work with the consultant to design the routes. It was a tough job but the problems were mostly technical. “We have to allow access of truckers to their destinations,” said Peter Chun, a Transportation Services engineer, “but we said, ‘Let’s get them on the roads we want.’ Because of the community group, [trucking companies] fully understood.”

Imara of CBE said building the ongoing relationship between the community and the city was at least as important as the truck route change. The next step, said Wlassowsky, will be putting up signs and distributing maps to inform truckers and the community about the new routes.

Meanwhile, CBE members are getting ready for an end-of-the-month meeting with the Bay Area Air Quality Management District to share the results of another community study, this one on the biggest, oldest industrial polluter in the neighborhood: the American Brass and Iron foundry (ABI). “ABI has been there for over one hundred years,” said CBE member Esther Goolsby. “We’ve been demanding that they fix their filters or find another way instead of just spitting out pollution. During lunch you can smell the chemicals. There are two elementary schools and a library right there — this affects the brains of these elementary school kids.”

Last year, the air district required foundries, including ABI, to submit “emissions minimization plans.” After ABI submitted its plan, CBE sent a comment listing important cleanup steps that the plan omitted. The air district will later post its final plan. But its decision-making process is “taking place behind closed doors,” wrote CBE attorney Roger Lin in an email. In their upcoming meeting with air district staff, residents will push for stricter rules that force ABI to cut pollution.

Pollution from diesel trucks is not only part of East Oakland’s pollution problem, said CBE’s Imara. It’s also part of “the larger issue of the global movement of goods. It doesn’t make sense to move apple juice from China to Oakland.”

“Products made abroad are shipped overseas by ocean-going vessels that are more polluting than diesel trucks,” Imara wrote in a recent blogpost. “The shipping containers that hold these goods are moved by diesel-powered machinery onto trains and/or trucks and come to distribution centers in … communities like East Oakland. The trucks spew particulate matter … and toxic pollution into the air. … We are not benefiting from this system. Instead we wish we had gardens, farmers, real food.”