Cycling enthusiasts recommend the most underappreciated local bike trips — routes that don't require cars and take riders to hidden gems throughout the region. 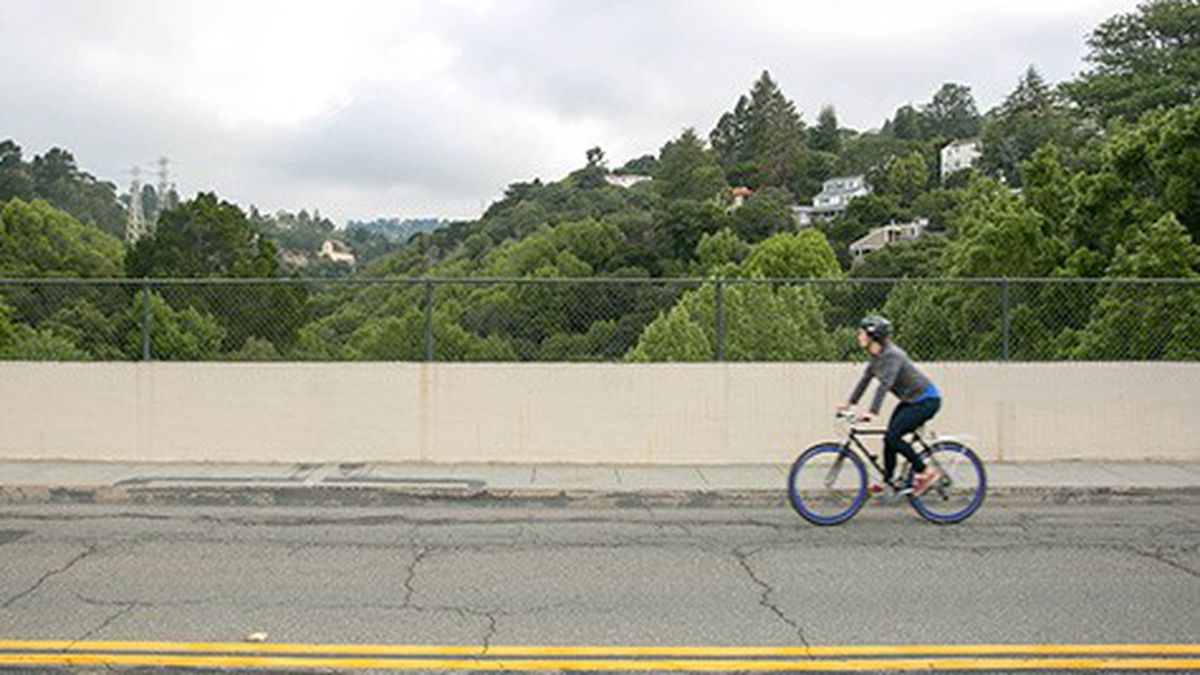 The East Bay has no shortage of scenic off-road bike paths that offer cyclists a nice respite from the busy streets of Oakland. I’ve spent many Saturday afternoons cycling along some of the most popular routes, including the San Francisco Bay Trail by Aquatic Park in Berkeley; the Bay Bridge bike path in West Oakland; and the Ohlone Greenway trail underneath the elevated BART tracks in Berkeley. But after repeated trips, those routes have become a bit too predictable for me. This summer, I’ve decided to try out some unconventional and lesser-known bike trips — ones that take cyclists to hidden gems throughout the region. Here are recommendations from knowledgeable East Bay bike enthusiasts.

An easy Saturday bike trip accessible from downtown Oakland — recommended by Sarah Fine, a member of advocacy group Transport Oakland — begins at the Grand Lake Farmer’s Market by Grand and Lake Park avenues (a great place to pick up snacks for the day). From there, ride east on MacArthur Boulevard and then head north on Dimond Avenue, which leads to Sausal Creek and Dimond Canyon Park. That park features great hikes and walks along Sausal Creek trail, and Fine recommends stopping by Leimert Bridge, a historic landmark that overlooks the park and connects the Oakmore neighborhood to Park Boulevard. You can view the full route at Bit.ly/SausalCreek.

Some of the best urban bike rides in the East Bay don’t feature picturesque natural landscapes. Local cycling group Bike East Bay has scheduled two rides this summer that have broad appeal and won’t require you to break too much of a sweat. The Pedalpupusa Bike Tour (July 11, Bit.ly/Pedalpupusa) and BBQ and Bikes Savory Ride (July 18, Bit.ly/BBQAndBikes) both offer riders low-key bike tours of some great authentic eats. Traveling with Bike East Bay’s advocacy director Dave Campbell during those scheduled trips is the best option, but Campbell shared with me details of the routes and stops in case you want to try them on your own. The first ride takes cyclists throughout the Fruitvale district to sample some of Oakland’s best pupusas, the traditional Salvadoran corn cakes stuffed with cheese and meats. Start at the Fruitvale BART station and take a short ride to Los Cocos Salvadorian Restaurant (1449 Fruitvale Ave.), and then ride east on 12th Street to Santo Coyote (4806 International Blvd.). From there, ride further east along Plymouth Street to a sidewalk pupuseria on International Boulevard and 93rd Avenue.

For the BBQ tour ride, start at the North Berkeley BART station and ride the Ohlone Greenway and Hearst Avenue east to Perdition Smokehouse (2050 University Ave., Berkeley). Next, head south on Milvia Street to BBQ Hut (6400 Shattuck Ave., Oakland) and further south on Shattuck Avenue to the Brick Pig’s House (5973 Shattuck Ave., Oakland). Finally, head south on Shattuck Avenue, east on 45th Street, and then further south on Broadway to Clove and Hoof (4001 Broadway, Oakland). These intermittent bike rides will help you burn calories from the ribs, brisket, pulled pork, and other tasty dishes you try along the way.

For a safe and easy ride that takes cyclists through some interesting natural and industrial landscapes, I recommend doing a trip from the Martin Luther King Jr. Regional Shoreline Park (7001 Edgewater Dr.) in East Oakland, through Alameda, and then onward to West Oakland. Cyclists can start at the scenic shoreline park and then head west along Doolittle Drive to Alameda’s Fernside Boulevard. Cross back to Oakland via Park Street and then continue west along Embarcadero Street by Union Point Park. Eventually, make your way over to 7th Street in West Oakland. Keep going west past the BART station and under Interstate 880 through a tunnel that takes you to a quiet industrial area with some eye-popping graffiti. From there, you can ride north on Maritime Street toward the Bay Bridge Trail by Burma Road. There, you can either head west onto the Bay Bridge or east toward Shellmound and 40th streets in Emeryville.

One of the most underappreciated on-road local bike routes is in Butters Canyon in the Oakland Hills, according to Jason Patton, the City of Oakland’s bicycle and pedestrian program manager. Cyclists start on Mountain Boulevard and Joaquin Miller Road, just south of Joaquin Miller Park. From there, ride east toward Skyline Boulevard via Burdeck Drive, Butters Drive, and Robinson Drive. The short two-mile ride along the Peralta Creek takes cyclists through a green wildlife corridor that features native trees and hundreds of species of wildlife and plants, according to the Butters Canyon Conservancy. It’s a peaceful and picturesque path that connects to many Joaquin Miller Park hiking trails for cyclists who want to add on-foot wandering to their trip.

Patton’s favorite East Bay bike ride is along Pinehurst Road in Canyon, an unincorporated town just northeast of Redwood Regional Park. To bike there from downtown Oakland, you can head up Park Boulevard to Mountain Boulevard in Montclair, then onward through Butters Canyon to Skyline Boulevard, which connects to Redwood Road and Pinehurst Road (for detailed directions, see last year’s Insider’s Guide story on Canyon, “Rolling Through the Backwoods” 2/26/14). The roughly seven-mile stretch of Pinehurst Road offers cyclists a ride through one of the most pristine natural forests accessible to East Bay dwellers without a car.

Gene Anderson — who runs the blog OurOakland.net and helps organize group walks in Oakland (see OaklandUrbanPaths.org) — recommended an historic group bike ride he put together years back. The roughly six-mile “Five Historic Houses Bike Tour” takes riders from East Oakland to West Oakland to five homes that have preserved part of local history. Cyclists can start at the Peralta Hacienda Historical Park in Fruitvale (2465 34th Ave.) and then head south along 34th Avenue to the Cohen Bray House (1440 29th Ave.).

From there, cyclists can ride west on Foothill Boulevard to the Camron-Stanford House (1418 Lakeside Drive) next to Lake Merritt. Next, head west on 14th Street to the Pardee Home in Old Oakland (672 11th St.). The last stop is the Defremery Recreation Center (1651 Adeline St.) in West Oakland. Those sites feature historic architecture and also offer a wide range of tours and museum activities — see Anderson’s page, 5houses.OurOakland.net, for more details and links.