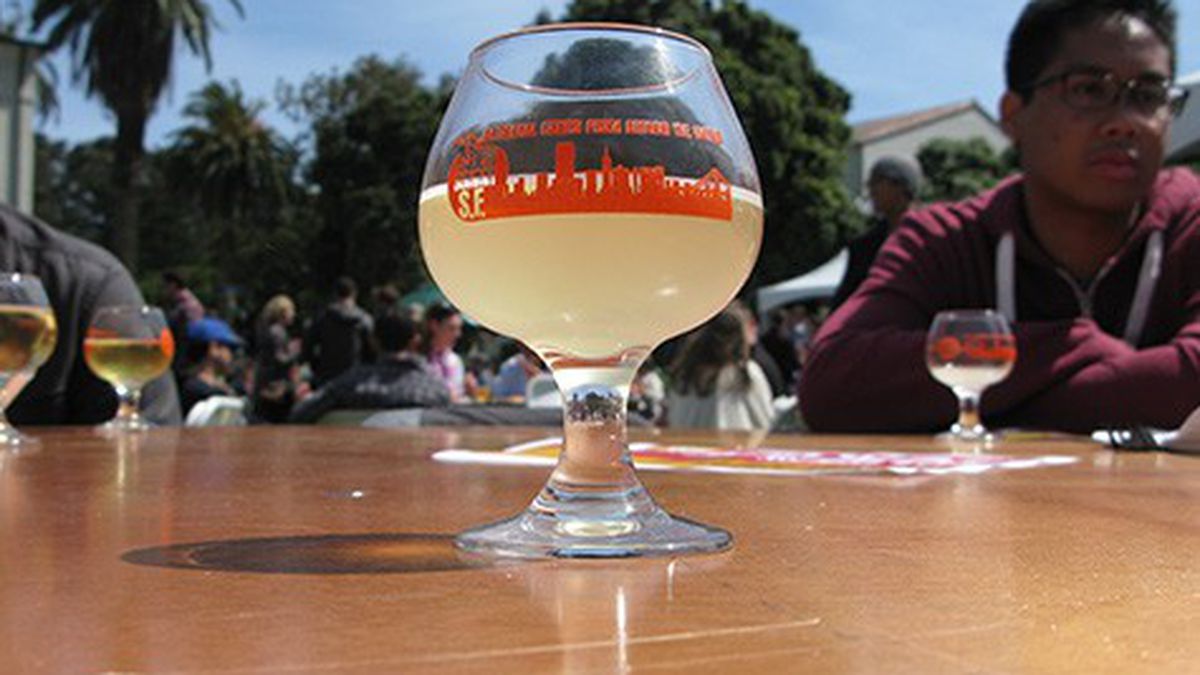 A Sweet Comeback for Apple Cider

The fruity beverage is hopping in California.

Three thousand people had gathered on the Civil War Parade Ground in the Presidio. The sun was shining on the Golden Gate Bridge, dogs were lounging in the grass, and folks were sipping out of tiny snifter glasses. And although the mood was genial, people weren’t here just to get drunk. They were here to learn about the country’s fastest-growing beverage: cider.

At Cider Summit SF, which took place on April 25, producers ran the gamut from England’s Aspall Cyder House (producing since 1728) to Tag + Jug, the Bay Area’s first cidery, which launched in March. I was most interested in the explosion of Northern and Central Californian cideries in the past few years. Eight of the Summit’s fifty producers were California cideries that launched in the past year, including South City Ciderworks in San Bruno, Golden State Cider and Specific Gravity Cider in Sebastopol, and Humboldt Cider Company in Eureka.

California’s beer- and wine-making infrastructure, combined with its craft-beverage loving consumers, have led to a boom in cider producers and taprooms serving ciders. Cider is accessible — it has none of wine’s snobbery, and its sweetness and low alcohol content make it great for casual, everyday drinking.

At the Summit, craft cider producers spoke wistfully about the tangy flavor of the first American ciders, made from now-scarce heirloom apple varieties. Those of us who grew up snacking on Red Delicious and Granny Smith might be surprised to learn of the apple’s amazing genetic variety. Today, the apples we buy at the supermarket are all clones of each other. But in the eighteenth century, thousands of heirloom apple varieties existed, many of which just weren’t that tasty raw. The apples not sweet enough to snack on were made edible by fermenting them to make cider. When cider fell out of fashion, and our food system became increasingly commercialized, apples started to look the same. So today’s craft consumer desire for ciders with interesting flavors is met with a dearth of the funky cider apples that early Americans enjoyed. The most common apples, called dessert apples, yield ciders that can be cloyingly sweet.

Producers have responded by getting creative. Aaron Bryan of Tag + Jug, who also runs Conduit Wine, started making cider in his Mission District garage. Now he uses a blend of five apples from a family orchard in the Sierra Foothills and champagne yeast to produce a cider that is very clear, not too sweet, and quite bubbly. It tasted more like champagne than beer, and was one of my favorite ciders at the event.

“You can probably find two of the five apples at specialty grocery stores, the other three I’ve never seen,” said Bryan, who enjoys cider in lieu of a mimosa or “with a late night burrito.”. “I wanted it to be bright and crisp and emphasize the natural levels of acidity that cider apples actually have.”

Humboldt Cider Company, another new cidery, produces delicious single-varietal ciders with strong apple flavor. Their Jonathan is golden in color and not very bubbly at all — it had the most real apple flavor of any cider I tried. Their hopped cider leaned more toward the beer side of things, with a sour apple flavor. You can find it on occasion at Hop Grenade in Concord.

Troy Cider is made with fruit from abandoned orchards in Sonoma, while its LA-based sister brand 101 Cider House uses a probiotic, wild yeast to give its unfiltered SoCal Scrumpy a distinct kombucha flavor. Both of the small-scale, experimental ciders will soon be available at Berkeley Bowl, Monterey Market, Piedmont Grocery, and Whole Foods outlets throughout the Bay Area.

Brewed on Treasure Island, Tag + Jug is currently only available at a few San Francisco spots (and, of course, at Treasure Island Flea), but Bryan plans to start selling to East Bay distributors later this year. With its California flag-topped bottle caps and family inspiration (“Jug” is Bryan’s grandfather, and “Tag” is the grandmother who made “the best damn apple pie” he’s ever had), the cidery exemplifies a trend that has deep roots in American history, but also a pioneering desire to shake up the craft beverage world.

“The cider industry is going to explode,” Bryan said. “There’s a bunch of small guys popping up, and people are realizing that they don’t have to drink the same cloying ciders that have been on the shelves for years.”