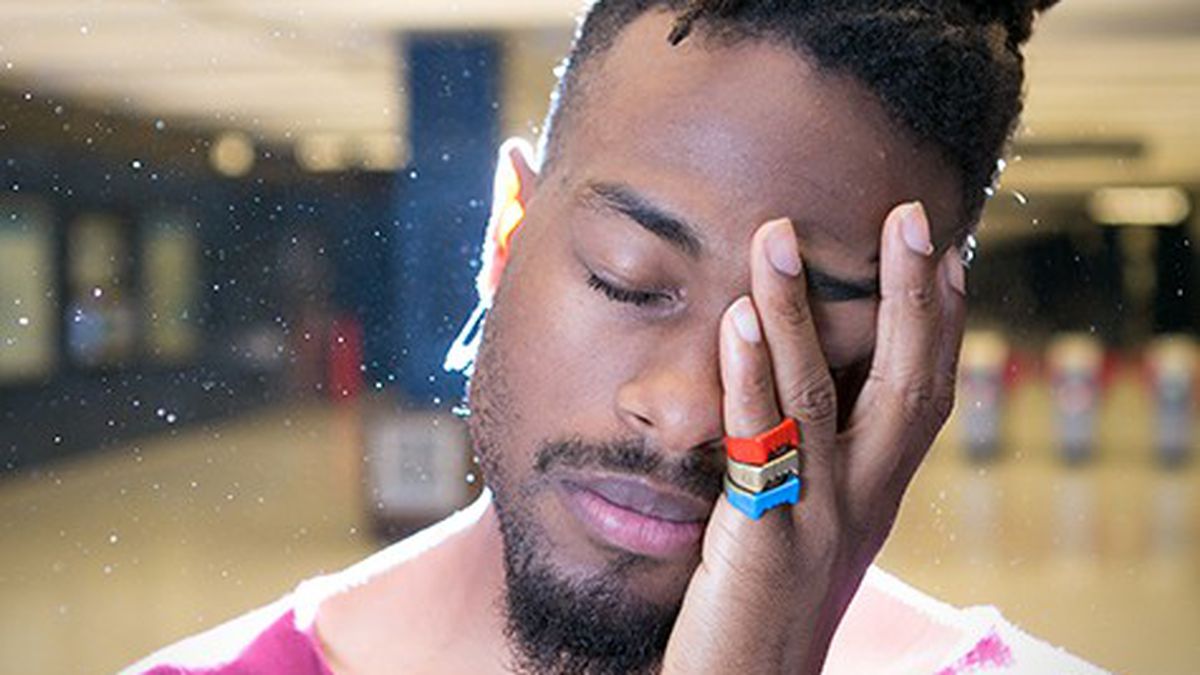 Nowhere, the new album-length collaboration between rapper Duckwrth and producer the KickDrums, is about a journey, though not a spatial one. Rather, Nowhere begins at frustration, and by the coda locates a point of clarity. The project is a meditation, both on the emotional turmoil of relationships in one’s twenties and on the chaos of being young and Black in a society where “Black lives matter” is a protest cry. These personal and political threads overlap in Duckwrth’s poignant lyrics about social media ubiquity, in which viral footage of tragedies loop on our phone screens while we judge one another by profile pictures.

Duckwrth (Jared Lee) established himself as an artist in the Bay Area over the past five years, but currently splits his time between Oakland and Brooklyn. While he created Nowhere mostly in New York — where the KickDrums (Alex Fitts) is based — he often returns to the Bay Area for months at a time to play hometown shows and work on projects with his creative collective, Them Hellas (which includes other notable, local MCs such as Queens D.Light and Anthony Dragons).

I spoke with Duckwrth last week when he arrived in Oakland for one such extended stay. He had just returned from AfroPunk, an annual Brooklyn music festival that features underground and mainstream African-American musicians, often with left-field sensibilities. Duckwrth lamented how hip-hop legend Lauryn Hill’s set had been cut short due to an apparent power outage. Some festivalgoers interpreted it as intentional censorship, or at least a blatant affront to her legacy.

“It was total disrespect for a titan of music,” Duckwrth hypothesized. “There’s so much backlash for what she talks about and how she does what she does.” Troubled yet brilliant artists like Lauryn Hill and Nina Simone, Duckwrth went on, exemplify his goals: to simultaneously parse personal struggles and to uplift his community.

Indeed, Nowhere is of a similar lineage as The Miseducation of Lauryn Hill — a personal, even intimate, work that counters narrow, stereotypical depictions of Blackness in pop culture and the media. “I came up with Nowhere because during the time we were creating the album, there was a lot of police brutality shit that was happening,” he explained. “I was getting aggravated with people’s attention spans because shit would happen and then they would just go back to regular lives. They’d rather talk about Kim Kardashian’s ass than what’s happening in their community and what’s happening internationally.”

While Nowhere is an urgent record reacting to the current cultural moment, the album also shows Duckwrth expanding the scope of his sound. He developed his rap skills freestyling in cyphers, and his earlier mixtapes feature more traditional beats with palpable Nineties boom-bap influence.

While many kinds of musicians have inspired Duckwrth — such as punk band Bad Brains and Pharrell Williams’ production outfit the Neptunes — he said that he only recently gained the confidence to stray from the genre conventions of hip-hop. Partnering with the KickDrums catalyzed this creative evolution. While Duckwrth went into the collaboration expecting trap beats, the producer — who is also a singer-songwriter in his own right — laid down synth-heavy pop melodies with melancholic inflections that underscore the MC’s unabashedly emotional lyrics. The KickDrums’ production inspired Duckwrth to experiment with singing — which he had never previously done — as well as a more vast range of flows.

Throughout the album, Duckwrth plays with and subverts hip-hop cliches. On the tracks “Lambo Pt. 1” and “Lambo Pt. 2,” for instance, he uses a narrative about a failed relationship as a metaphor for the materialistic ethos of mainstream rap. At times, he does this with a frustrated earnestness (It was all a dream/Cause God know I can’t afford you/This minimum wage/Dreams of getting paid), and at times with tongue-in-cheek, ironic jabs at some rappers’ obsession with wealth and status. On “Unagi” — which is as close to a strip club anthem as we’ll get from Duckwrth — he rhymes with sarcastic self-awareness about how talking about “gangsters and strippers” feels almost like a prerequisite for being an MC.

On the final track of the album, “Now Here (Outro),” Duckwrth cathartically transforms the confusion and bitterness of the previous songs into a moment of clarity. The feeling of being lost and going “nowhere” dissipates as he embraces being present in the current moment: I was nowhere/But I am now here, he repeats like a mantra. “‘Nowhere’ is the current state; it’s the gray area; it’s the middle ground,” he said. “‘Now here’ is like a destination where people can be more evolved and more aware. … It’s people’s energy that needs to change, not just politics.”