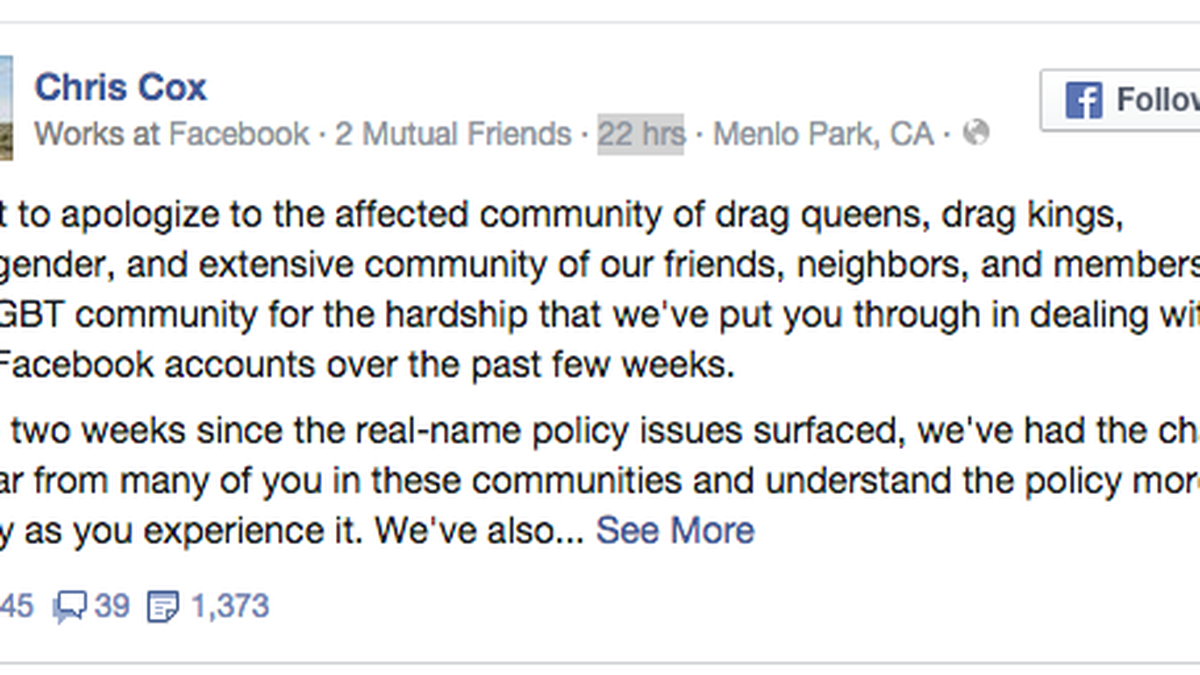 By Anna Pulley
Oct 2, 2014
In a surprising move on Wednesday, Facebook’s chief product officer Chris Cox issued an apology (on Facebook, of course) saying that Facebook will fix its policy on forcing users to use their legal names on the social media site. Drag queens and other members of the LGBTQ community have been vocal opponents of the policy, claiming it disproportionally affects members of the queer community. The backlash against Facebook prompted many users to switch to a new social media site, Ello, as well as many discussions between Facebook headquarters, San Francisco City Supervisor David Campos, members of Sisters of Perpetual Indulgence, and others.

[jump] “We owe you a better service and a better experience using Facebook, and we’re going to fix the way this policy gets handled so everyone affected here can go back to using Facebook as you were,” said Cox. “[W]e see through this event that there’s lots of room for improvement in the reporting and enforcement mechanisms, tools for understanding who’s real and who’s not, and the customer service for anyone who’s affected.”

“The acknowledgment that they made a mistake meant a great deal to all of us,” David Campos told BuzzFeed. “They agreed with what we were saying all along — that we want people to be their real authentic selves on Facebook, but that doesn’t necessarily mean using your legal identity.”

If you’d like to celebrate your newfound freedom along with Campos, Sister Roma, Heklina, and others involved in the negotiations, a victory rally will be held today at noon at San Francisco City Hall.

Here’s hoping Facebook follows through on its word and allows users who may face harassment, discrimination, the potential to be fired, and cyberbullying some much-needed protection and anonymity.