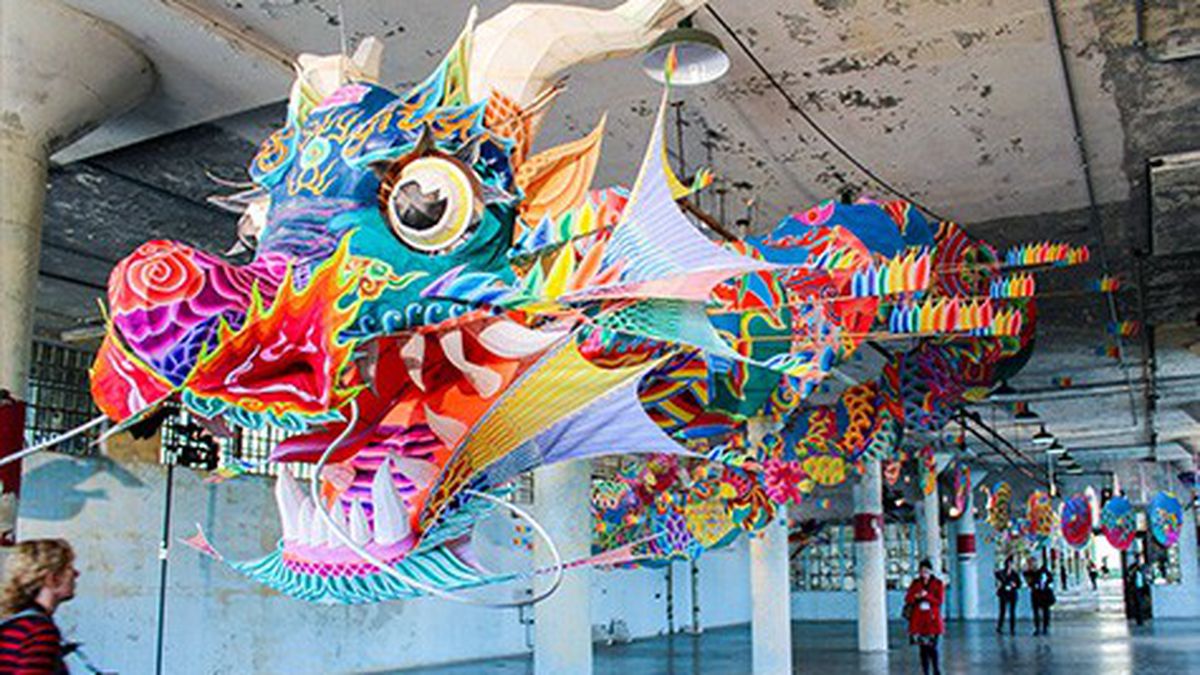 Viewer can either engage thoughtfully with the works, or go home with a T-shirt.

After visiting the new Ai Weiwei installation last week, a tour guide near the dock yelled out to me, “Hey, did you have a good time?” I must have been frowning, reflecting on the cells that I had just sat in, and the prisoners’ mugs. The seven works that were recently installed in the historic prison — and popular tourist destination — had made for stunning photos, but it didn’t feel right to say I had enjoyed my visit to “the Rock.”

Ai Weiwei is a prolific, Beijing-based, multidisciplinary artist and activist best known for his work concerning free speech and his radical use of social media. In 2011, he was detained by the Chinese government without any official charges for 81 days: he is still prohibited from leaving the country. But through a collaboration with the For-Site Foundation, Ai has developed and implemented @Large, an elaborate artistic intervention that he designed for Alcatraz and had shipped to the United States. It inhabits sections of the prison that are normally roped-off from the public.

The show centers on unjust incarceration, implying a relationship between confinement and censorship by focusing on political prisoners who have been incarcerated for critiquing their governments. The works point to a large number of specific historical instances, while also gesturing toward a conceptual oscillation between restriction and release.

For “Stay Tuned,” Ai chose a dozen songs and spoken-word recordings written by individuals who have been detained for creative expression, including Russian feminist punks Pussy Riot and Tibetan singer Lolo. Each is played inside a small cell, in which visitors may sit on a metal stool and listen. The experience is one of immediate claustrophobia that is simultaneously intensified and appeased by the reverberating sounds of resilience. For “Trace,” Ai carpeted the floor of Alcatraz’s massive New Industries Building with portraits of political prisoners assembled from LEGOs. For “Blossom,” he filled bathtubs, sinks, and toilets in the prison’s psych ward with delicate beds of white porcelain flowers.

All seven pieces are exquisitely executed, breathtakingly positioned in the light coming through the old, broken windows of the prison’s deteriorating buildings. The distinct aesthetic of rusted metal, dark corners, and broken glass remains consistent throughout the entire park — until you exit into the clean, shiny, and over-crowded gift shop, that is.

Alcatraz makes for a somewhat troubling site for the installations because it invites visitors to consume a pre-packaged aesthetic of imprisonment, romanticizing and fictionalizing it for the sake of spectacle. Ai’s installation is almost explicitly intended to disrupt that one-dimensionality, relating the site to contemporary global politics, and asking viewers to recognize prisoners whose stories haven’t been glorified. In practice, though, the works flicker between contributing to the tourist-oriented presentation of those stories, and undermining it. The distinction ultimately pivots on the viewer’s decision to either engage thoughtfully with the works, or go home with a T-shirt.