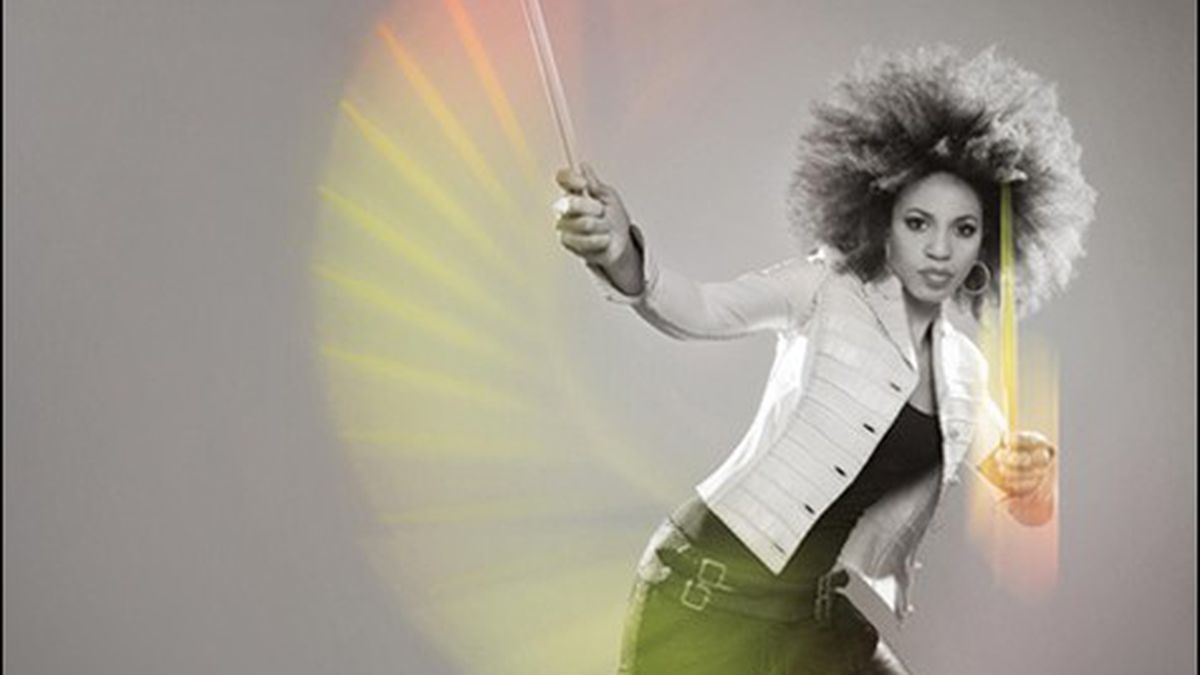 Down the Spectrum Road

With her taut-muscled arms and Angela Davis fro, drummer Cindy Blackman is one of those people who just looks famous — even from far across a room, and even if you don’t know who she is. If you check out one of her shows, there’s a slight chance you’ll run into her slightly more famous husband, a Latin American guitarist who hit his peak in the Sixties and Seventies. Here’s a clue: his last name rhymes with Ran-tan-a.

He sat in the second row from the back during a Thursday night set at Oakland Yoshi’s, at which Blackman played with the Spectrum Road Ensemble, a group featuring guitarist Vernon Reid, keyboardist John Medeski, and bassist Jack Bruce. Launched several years ago, the ensemble is really a tribute to fusion drummer Tony Williams, who held down rhythm sections for Miles Davis, Wayne Shorter, Dexter Gordon, and a host of other greats. Williams’ discography is disproportionately vast compared to his name recognition. According to Reid, the drummer was woefully underappreciated throughout his short life. He died of a heart attack in 1997, while living and teaching in the Bay Area.

Even posthumously, Williams never quite got his due. “Now he was the one who invented jazz-rock fusion — not Miles, with all due respect,” Reid argued, as the audience clapped approvingly. Even Carlos Santana nodded, although he had come to the show wearing a jacket adorned with Miles’ face on the back.

In truth, it was a little odd — and at the same time a little exciting — to hear someone speak so politically about a genre that’s fallen into ill repute. Many of us hear the term “jazz-rock fusion” and don’t immediately think Bitches Brew or Filles de Kilimanjaro. We don’t think of weird meters or rhythmic complexity. We don’t even think Miles and Tony Williams. Instead, we think of jam-band wankery and directionless improvisations. We might even associate “fusion” with one of its soft-palette offshoots — like smooth jazz or bad Eighties synthesizer music. In January, the web site All About Jazz ran a column with the somewhat defensive headline, “’80s Fusion Albums that Don’t Suck.” Because the genre is defined by its impurities, it’s easy to cannibalize. It’s also easy to dis.

Thus, the Spectrum Road quartet has a public-interest angle that may or may not be intentional. Reid and Bruce launched the project in order to resurrect and redefine Williams – they consider themselves his hagiographers. And yet, the band has an even larger purpose — bringing a sense of tradition and proper musicianship to an unwieldy genre.

The show at Yoshi’s was technical and complex in a way that might have intimidated some listeners. At 8 p.m., the house looked as if it had nearly sold out to an audience of hard-core jazz heads. Many people had come alone just to hear the music. Some sat by themselves at far-corner tables, nursing beers and eyeing Santana. Others had clearly come for the cachet of Cindy Blackman, who has become something of a celebrity due to her gender, her highly publicized marriage, and her work with rock singer Lenny Kravitz. When she sat down at the drum set, fans hooted. When she delivered her first genuine solo, the room erupted. Reid leaned backward as though he’d been hit by something. At the end of the song, he introduced her: “With the Afro like a halo – the empress – Miss Cindy … Blackman … Santana.” People cheered. Santana sat and clapped quietly. A couple songs later, he rose and slipped backstage, leaving a bouquet of flowers on the table.

Blackman clearly gave the band street cred, though the music also spoke for itself. It was fusion in the sense that every song head was riff-based, which usually meant a single line played over and over again, rather than a full-on A section. The solos were long and intensely focused, the chord changes intentionally murky. Blackman veered between rock and jazz, sometimes playing backbeats, sometimes providing a swing groove, sometimes battering her snare. Medeski played a Hammond B3 organ with a Hoener Clavinet stacked on top, so that he could handle both simultaneously. He plugged the Hammond into a Leslie speaker cabinet to create weird sound effects — like a left-hand bass line that sounded like a soda can being crackled, or a sustained note so high and shrill that audience members had to cover their ears. In one song he made smeary glissandos by flattening his palms on the keyboards.

The real payoff came at the end, when Santana got on stage for a two-song encore. He led the band in a riff that sounded almost like a tango. Fusion fans in the audience seemed to recognize it, and many of them brightened. One woman began dancing in her seat. For the band’s final number, Santana broke into the only truly familiar song of the night — “Roadhouse Blues” by The Doors. By then it was well past 10 p.m., and patrons had already queued up outside for the second set. Nobody inside seemed to mind. Santana ceded the stage to Reid, who delivered a virtuosic rock solo in total jazz stance – meaning he didn’t do any of the exhibitionist lean-moves or crouch-moves that rockers normally do, to show they’re “really into it.” The crowd cheered anyway. Santana turned toward Blackman, whom he wed just a couple months ago, after proposing to her on stage in Tinley Park, Illinois. He must have winked at her, because she smiled back.

A Block, a Company, and a Region