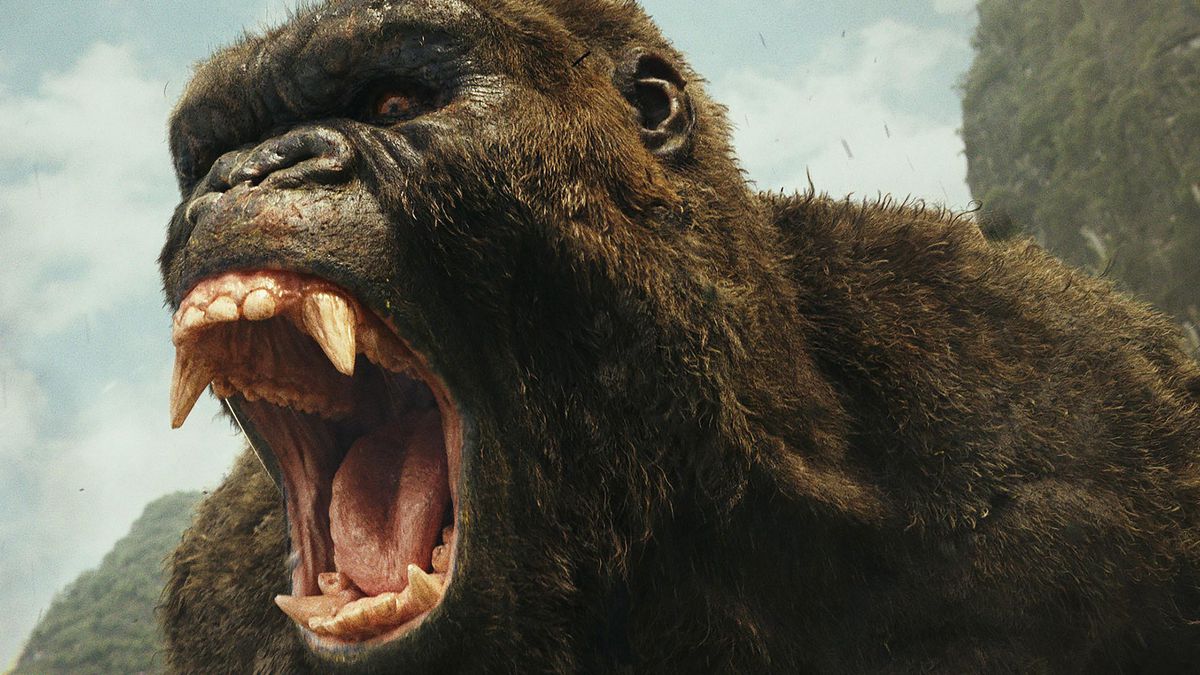 Is the giant ape working for the Viet Cong?

Is Kong: Skull Island the long-lost sequel to Apocalypse Now? Was there a top-secret component of the war in Vietnam involving US Army troops against a gigantic ape on a “hidden” Pacific island? Who knew John C. Reilly could be so funny? These and other burning questions occur to us as the latest entry in the long-running King Kong franchise lurches and bellows for 118 minutes on the IMAX screen, thirty times the size of a man and angrier than anything on earth. Nothing like it ever was. Look on its works, ye mighty, and despair. Or words to that effect.

On the Jefferson Airplane’s 1969 LP Bless Its Pointed Little Head, one of the songs is intro’d by an audio clip from a live concert at the Fillmore East in which the band comes on right after a screening of the original 1933 King Kong. The Fillmore audience cheers lustily for the gigantic ape, trying in vain to swat away the airplanes sent to kill him. The cut is subtitled “King Cong,” evidently an editorial comment on the conflict then raging in Vietnam – thus the connection between this powerful-but-doomed beast and the Viet Cong, in its struggles against more or less the same people who put King Kong in chains and sold tickets.

None of that probably occurred to Jordan Vogt-Roberts, the director of Kong: Skull Island. The TV-centric filmmaker, whose The Kings of Summer played a pleasing variation on the coming-of-age formula, was obviously tasked with once again bringing in the big gorilla on a platter to be served with popcorn. And if that’s all we’re really looking for in the 2017 version, we pretty much get it.

The year is 1973. US government-backed scientist-spies Randa (John Goodman, in top form) and Brooks (Corey Hawkins from Straight Outta Compton) come to Saigon to recruit Lt. Col. Packard (Samuel L. Jackson) and a platoon of his men for a classified sideshow on the aforementioned island, which is surrounded by storm clouds so thick no one can find the place. But they find it anyway. Also along for the ride are a British commando (phlegmatic Tom Hiddleston), a beautiful blond scientist-babe (Brie Larson), and a few pieces of monster bait played by John Ortiz, Jing Tian (from The Great Wall), et al. The island is crawling with giant yaks, spiders, pterodactyls, octopi, and similar beasties, but the chief combatants are the title character— played by English actor Toby Kebbell, who coincidentally portrayed another simian in Dawn of the Planet of the Apes – and a nasty “Skull Crawler” reptile, likewise huge. The preliminaries take about an hour and a half. The main event is indeed vivid.

En route the invaders discover the Ben Gunn of the piece, Hank Marlow (Reilly), a downed WWII pilot stranded on the island lo these many years. Marlow never stops gabbing about the Chicago Cubs. He’s the comic relief the movie desperately needs. Marlow functions as the go-between for the military newcomers and the natives, who resemble the fierce jungle people in Apocalypse Now more than they should (the movie was shot in Vietnam, Australia, and Hawaii).

Director Vogt-Roberts, aided by four different writers, relies a little too much on Francis Coppola’s Viet nightmare. All that really accomplishes is to drive home the implied critique of American militarism and its endless wars – the VC-King Kong connection. The big guy actually functions as the balance of nature on Skull Island. If he dies, the place becomes a Jurassic Park-style resort attraction. So the world needs Kong. Keep telling yourself that.