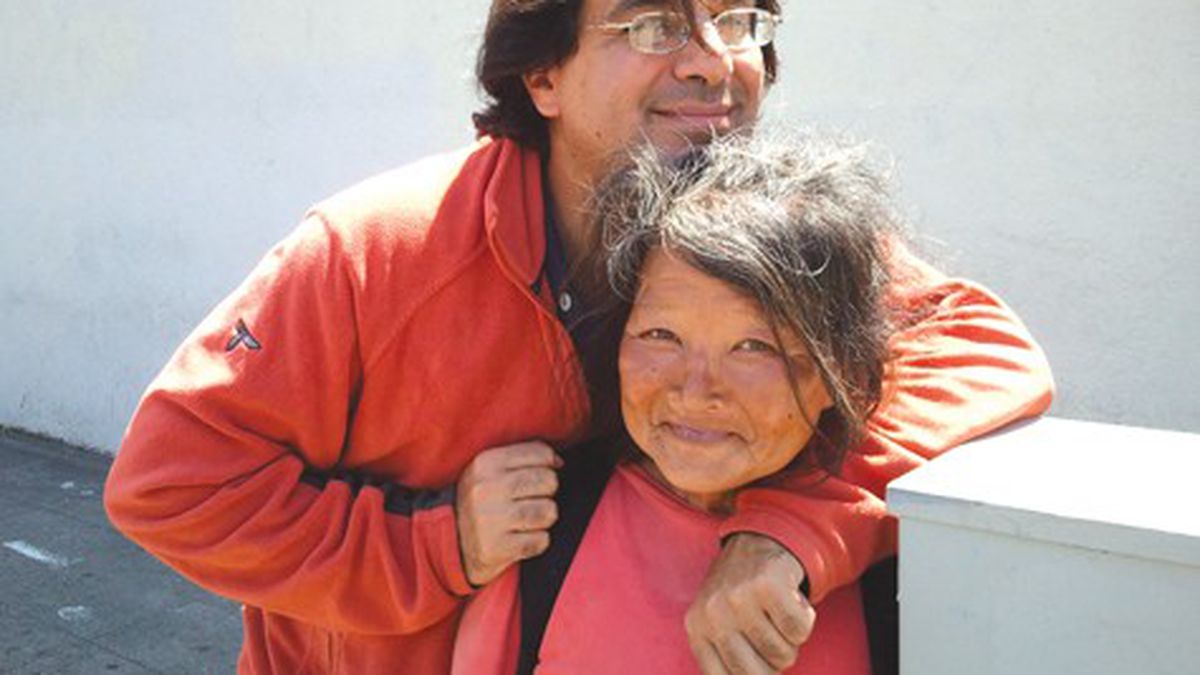 Eight years ago, Amir Soltani moved from Boston to West Oakland. One of the first things that struck him was the sound of recyclers pushing their rattling shopping carts down the streets at night. “It was spectral,” he recalled. “They would emerge and vanish in the darkness … and they’d be going through your trash.”

While many people might consider the recyclers’ lifestyle a nuisance and their carts an eyesore, Soltani was captivated, and began observing nuances about their way of life. “I started noticing everyone had their own style,” he said. “Some people had a bicycle or three carts tied together with ropes. And it wasn’t just shopping carts — everyone had their own way.”

One day Soltani approached a recycler named Jefferson Miles, an ex-longshoreman who had been rendered partially paralyzed from a heart attack. He asked Miles if he could accompany him to Alliance Metals, a recycling center on Peralta Street tucked between Fitzgerald Park and the MacArthur Freeway. He was shocked and moved by what he discovered there.

“It was like walking onto a Fellini set,” Soltani said. “Just the amount of activity going on in there was staggering.” Recyclers — including the physically and mentally disabled — gathered amid the squalor to weigh the street’s bounty.

On one hand he was witnessing a profound tenacity to survive, but on the other hand, he was bearing witness to the forsaken and forgotten, a stark reminder of Oakland’s failing socioeconomic system. “The recyclers are a vast array of humanity,” said Soltani, a former journalist. “Everything about it is improbable, but they’re survivors and entrepreneurs in their own way. It’s a powerful workforce, really.”

Although he had never made a film before, Soltani — who’s also a longtime human rights activist — decided to document the recyclers’ plight. “I felt I have to tell this story; it was in my blood somehow,” he said. “I was living in these condos on Magnolia Street and there was a definite conflict about having the recycling center in the neighborhood. It’s difficult for the residents — it’s noisy and smelly and dirty. And all the feelings people have about trash is projected onto the recycling center and the people who frequent it. They’re even called ‘scavengers.'”

So for five years, Soltani and his co-director, Chihiro Wimbush, followed four homeless people who survive by recycling trash: Jason, who Soltani calls “the Olympic titan of recycling”; Roslin, a grieving widow; Landon, a fallen minister; and Miss Kay, a former punk-rock drummer. Through their stories, Soltani traces the trials, travails, and triumphs of living hand-to-mouth, can-to-can.

Currently titled Dogtown Redemption (though Soltani said he’s considering retitling it American Untouchables: A Story of Redemption in Dogtown), the project just wrapped up a successful Kickstarter campaign, which raised more than $48,000. The funds will allow the filmmakers to finish their film. They hope to complete it by September in order to submit it to the Sundance Film Festival.

Although Soltani knew how to tell a story, he had no idea how difficult — and time-consuming — making a documentary would be. “Sheer madness,” he said. To begin with, he had to earn the trust of his subjects, which took time, patience, and tenacity.

“People were nervous,” he said. “We would show up at the recycling center with a camera and they’d think, ‘Is this the Oakland police department?’ There’s a fragility that comes with being homeless and being a recycler. You have very little claims on public space … even the parks.”

Dogtown Redemption attempts to tackle the incongruity of Oakland’s burgeoning economy against the backdrop of its poverty, celebrating the individuals who continue to snatch hope from despair. Viewers are asked to consider the ways the city’s disenfranchised populations foster their own agency, community, and culture through recycling. It also asks people to reconsider their assumptions about why people become homeless in the first place. Miss Kay, for example, not only comes from a prominent Korean-American family in San Francisco, but is also an accomplished drummer who once played with the punk-polka band Polkacide.

For Soltani, the stories of these recyclers connected with him personally, as well. As an immigrant from Iran who wended his way through Tufts and Harvard on full scholarship, Soltani was incredulous that for a slice of the population in Oakland, the American Dream was faltering, rendering the homeless’ struggle largely invisible. Soltani — who was involved in helping to rebuild Afghanistan’s infrastructure in the wake of the Taliban’s fall — said the adversity he faced abroad paled in comparison to the plight of Oakland’s homeless population. “I’d come to America as an immigrant and America was very good to me,” he said. “In some ways [the Oakland] experience is worse than what I experienced in Afghanistan, especially in terms of exclusion and segregation.”

Accordingly, Dogtown urges viewers to consider the physical infrastructure of West Oakland, taking into account the history of the MacArthur Freeway’s erection and other acts of government that were presented as “urban planning” and cut off the entirety of West Oakland and the developing African-American middle class from the rest of the city in the 1960s.

“The MacArthur Highway is one of many debacles of planning and modernization (destruction and discrimination) that sacrificed West Oakland in the name of linking San Francisco and the suburbs to shoot up real estate prices,” Soltani wrote in an email to me. “It literally sliced its arteries, and that’s a huge part of why there is so much suffering and homelessness there — it’s not about bad people, but cruel planning.”

The silver lining of this story is actual redemption, however; it isn’t simply a pithy title or a catch-phrase. “In five years we’ve watched Landon break his addictions, get married, and go back to the recycling center and help others,” said Soltani. “Relationships are so critical in the question of homelessness.”

Jason, a former gang member and “recycling titan,” often collects recyclables for eighteen hours alongside his wife Heather, making up to $150 a day. Through sheer endurance and commitment, he helped Heather to free herself from a life of prostitution.

In addition to the documentary — which has received funding from Cal Humanities, Sundance Institute, and the Semnani Family Foundation — Soltani and his crew also plan on creating a multimedia project, funded by the San Francisco Foundation, which will create an interactive map of West Oakland and the recyclers who traverse its streets. Viewers will not only be able to “accompany” the recyclers on their daily journeys, but also confront the economic, racial, and social barriers alongside the protagonists. Soltani hopes to be able to embed videos not included in the film, including interviews with condo owners, historians, and community leaders like Lynette Gibson McElhaney, West Oakland’s new councilwoman. Viewers will also be able to upload their own stories about the neighborhood, contributing to what Soltani calls the “multihued tapestry of West Oakland.”

Ultimately, Soltani hopes these projects will combat the intentional “invisibility” thrust upon Oakland’s homeless. “We’re looking to put West Oakland back on the map,” he said. “Our goal is not only to redress an historic wrong — the desire to make West Oakland invisible — but to provide a spatial and historical context for interpreting and interacting with Dogtown Redemption.”