.Fathoming the Work of Yang Fudong

This mid-career survey presents the artist's work as commentary on the contemporary Chinese experience. 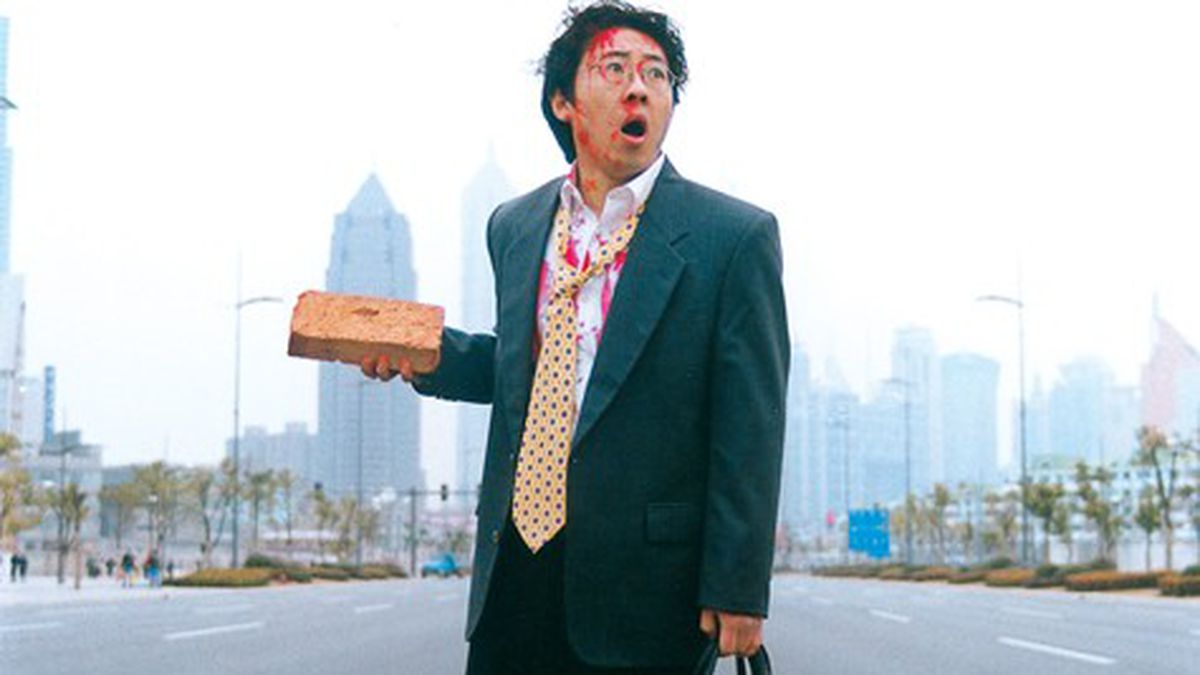 In Yang Fudong’s “The Fifth Night,” several lone characters wander listlessly about a sound stage resembling a Shanghai public square. This black-and-white video work, however, is not a film in the monolithic sense. It is distributed among seven screens, each presenting the footage of a different camera, so the foreground of one — a pensive woman on a staircase, for instance — appears as background in another, which may be focused on a group of men working on a broken-down carriage. The result is beautiful, subdued, and mesmerizing, as well as disorienting.

However, it is not included in Estranged Paradise, the artist’s mid-career retrospective now at the UC Berkeley Art Museum and Pacific Film Archive. Rather, an alternative version called “The Fifth Night (Rehearsal)” stands as this powerful exhibition’s centerpiece. The work is arranged exactly like the primary work, except the screens show not the camera footage but rather the cameras’ unedited monitor feeds. The hallmarks of Fudong’s art — a predilection for film noir, beautiful models, introverted subjects, and fragmented experience, to name a few — come through clearly, but the character of the work is not the same. It’s rougher around the edges and brings its artifice closer to the fore.

Here and in other curatorial choices, Estranged Paradise draws attention away from the polished surfaces that characterize much of Fudong’s work to expose deeper layers of cultural commentary that might otherwise escape non-Chinese viewers. Fudong’s career, which began in the early Nineties, has temporally aligned almost perfectly with China’s sudden, intense transition to commodity capitalism, and art historians have been keen to fathom the fractured psyche of the age in the artist’s recurring subjects: defiantly withdrawn young intellectuals or alienated urbanites, often possessed of money and access to Western culture but unsure quite what to do with it.

Right away the show introduces several objects from the artist’s early career that upset authorities in China: two photographs of the artist’s writing-covered hands, taken during a three-month vow of silence that nearly got him expelled from art school, and a copy of the catalog to the Ai Weiwei-curated Fuck Off exhibition, which the government would shut down, seizing Fudong’s photograph “The First Intellectual.” Included in this exhibition, the photograph depicts a brutalized and bewildered white-collar worker, clutching a brick. Upstairs, the surface glamour of Fudong’s International Hotel photographs, which feature beautiful models lounging poolside, cracks in juxtaposition with “East of Que Village,” a six-channel video installation portraying the flip side of urbanization: a largely abandoned rural village overrun by starving dogs — surely one of Fudong’s grimmest, most haunting works.

Estranged Paradise is not a particularly large exhibition for a mid-career survey. To a viewer not already familiar with Fudong’s work, it will likely even feel cursory in places. Many of the individual pieces, however, are rich enough to return to again and again. I suspect that when I inevitably come back to spend more time with “The Fifth Night (Rehearsal),” yet more of Fudong’s surface sheen will peel back to reveal the subtexts that, as this exhibition suggests, are the heart of the matter.