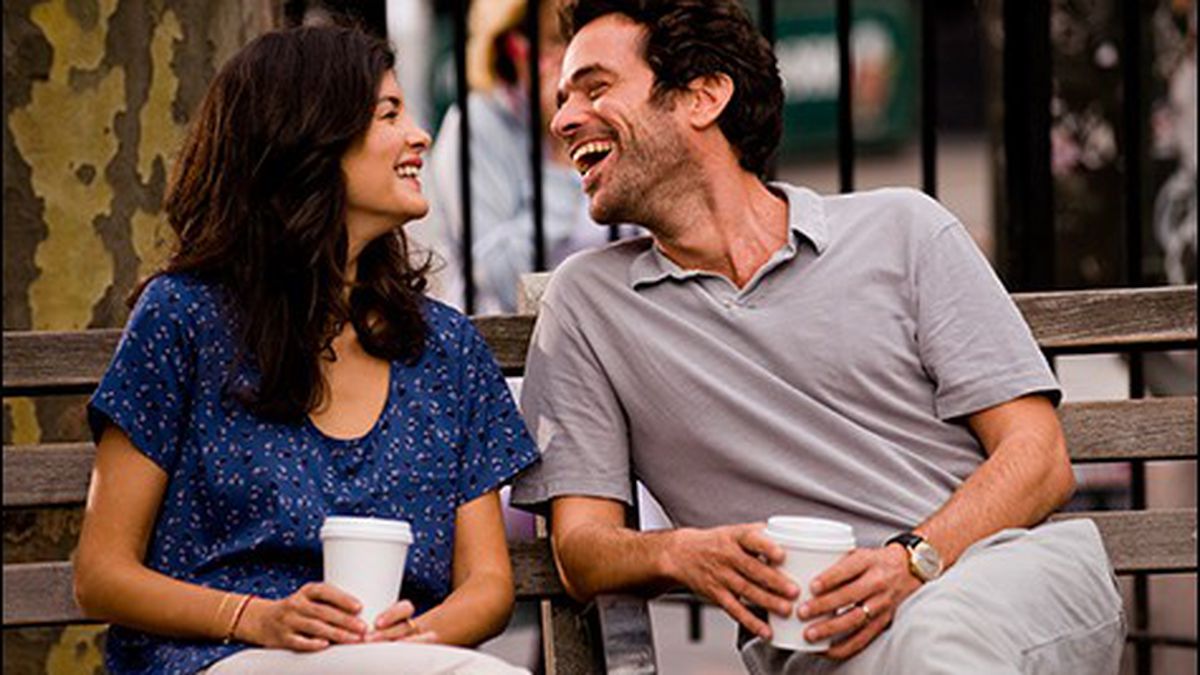 Some say the border between French and Hollywood commercial movies was erased a long time ago, especially when it comes to comedies, actioners, and other popular genres. We’re not so certain about that. In the words of Chinese Puzzle‘s lead character, Xavier Rousseau: “Çe n’est pas gagné.” Loose translation: That ain’t necessarily so.

In the movie, we meet perplexed Parisian novelist Xavier (Romain Duris) in the midst of breaking up with his English wife of ten years, Wendy (Kelly Reilly). She’s moving back to New York with their two young kids, who have never lived anywhere but Paris. Wendy and Xavier gaze dreamily at each other as they part, and Xavier’s heart aches for his children, but there’s no time to drown his sorrows. He immediately packs up his laptop — handy for conferring with his publisher while lashing together a new manuscript — and follows his wayward family to NYC with a plan in mind. Xavier has a network. All the principals in this sprightly romantic comedy (French title: Casse-tête chinois) are from writer-director Cédric Klapisch’s 2002 rom-com L’Auberge Espagnole, and its 2005 sequel, Russian Dolls.

Xavier’s Brooklyn-dwelling lesbian best friend Isabelle (Cécile de France) wants a baby with her partner Ju (Sandrine Holt), and convinces him to donate the needed sperm. No problem, although we observe that a Frenchmen intending to masturbate into a receptacle should remove his neck scarf first. Then there’s the matter of Wendy and her new boyfriend (Peter Hermann, twice Duris’ size), residing in a luxurious Midtown Manhattan condo along with Xavier’s kids, who miss him. And Xavier’s old girlfriend Martine (Audrey Tautou) from Barcelona and Paris, who’s coming to New York for a visit with her kids and wants to get together. Meanwhile, Xavier consults a shyster immigration lawyer (the hilarious Jason Kravits) in order to stay permanently in the US, and ends up marrying an “immigration bride” named Nancy (Li Jun Li) to satisfy the visa requirements. A prickly stickler of an investigating INS agent (Peter McRobbie) comes attached as part of the deal.

Then there’s the other Isabelle (Flore Bonaventura), the one who’s a Belgian babysitter; and all the neighbors in New York Chinatown, where Xavier finally finds an apartment above a bakery; and the ghosts of Schopenhauer and Hegel (both played by Jochen Hägele) to console our hero. Plus the tale of the beaten cabbie, Xavier’s visiting tough-guy father (Benoît Jacquot), Xavier’s new job as a bicycle messenger, and, yes, the city of New York itself, in all its transitional splendor. France has emptied out and split for New York. It’s a true auberge espagnole, which could also be translated, uncharitably but aptly, as a Chinese fire drill. Or an Irish wake, a Katzenjammer, or, still more uncharitably, a classic circle jerk. Duris’ Xavier spreads himself thinly but grinningly over the landscape. The actor has seldom been so engagingly bewildered, going back to his role as a stranger in Romania in Tony Gatlif’s Gadjo Dilo.

Everyone in the movie looks maximally sexy. Nobody’s having a bad hair day. The camera swoons over Reilly, Tautou, and de France, but Duris manages to be the center of attention without even trying, surrounded on all sides by beautiful women. If anything, New York comes across as even more idyllic than in a typical Hollywood movie, as the most fascinating place on earth, a true “world city,” hipster heaven (uh-oh), with construction going on everywhere you look. Xavier’s Chinatown love nest is colorful as all hell. He, the kids, and his various female companions eat Mickey D’s and watch The Simpsons on his laptop. The hardest part about his tangled relationships is explaining it to the gosses. However, we never have to guess what Xavier is thinking — his voiceover narration continues nonstop.

Filmmaker Klapisch has pretty much always maintained a light and fluffy outlook. His first big stateside art hit was When the Cat’s Away, a 1996 soufflé about a lost pet. With the Auberge Espagnole trilogy, Klapisch offers an antsy-but-cuddly alternative to Richard Linklater’s more melancholy Before series. In this case, at least, the French essentials — ravishing women (de France is especially glamorous), travelogue cityscapes, more bed games, matter-of-fact cosmopolitanism — give essentially the same basic date-movie material some unwarranted optimism to chew on. “Happiness is disaster for fiction,” declares Xavier’s publisher. Perhaps. But who truly wants to believe this is fiction?

Partnerships That Pay Off