.Candidates Vying for Oakland School Board Seats Defined by Positions on Charter Schools 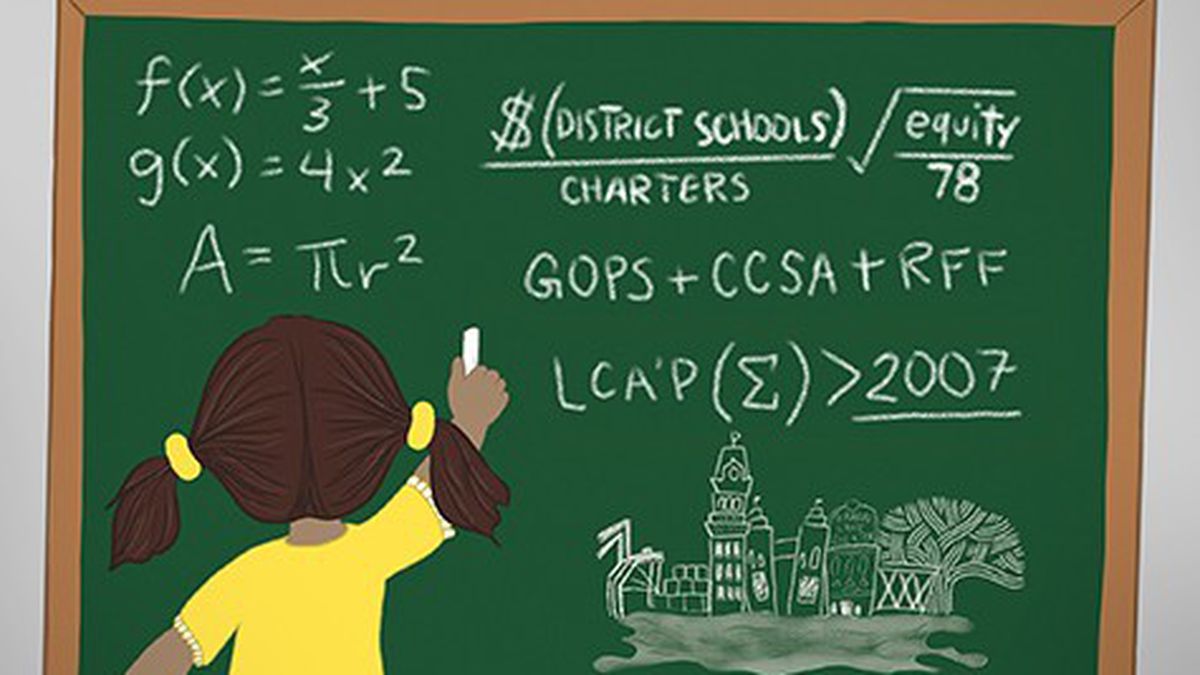 What do you get when you take a city that has 58 public schools, add 37 charter schools, divide the whole system by race and class, and then multiply all this by millions of dollars from an ice cream mogul’s fortune and Silicon Valley billionaires? You’ve got the complicated politics of the Oakland Unified School District.

OUSD has been plagued with problems for decades, but few would argue things haven’t improved in recent years. In 2003, the state took over the district because it was so poorly managed. Six years later, Sacramento handed power back to the local board. Since, the district’s budget has stabilized and some of the more dysfunctional aspects of OUSD’s administration have faded into memory. Half of the current board members are running for re-election on this record of incremental improvement.

“I get frustrated with this constant drumbeat of ‘everything is lousy.’ It’s not true,” said Jody London, the District One school-board director who’s running for re-election in November.

OUSD regained a credit rating of AAA in July, she noted, an achievement that will save taxpayers millions and allow the district to reinvest more in its facilities.

“We’re at a level of organization and structural togetherness I’ve never seen in the district before,” she said of Oakland’s finances and educational programs.

James Harris, who represents district seven on the board and who is also running for re-election, is similarly optimistic. According to Harris, the district’s administrators, teachers, and parents have begun to adopt a “culture of college and career readiness” for students. He hopes it will be reflected in higher graduation rates.

Another previous limiting factor to OUSD’s success was money. But now more of that is starting to flow, too.

In 2014, Harris helped convince voters to pass Measure N, a $120-per-parcel tax passed that raised millions for education programs. He has also been cheering the delivery of philanthropic money, such as the recent $2.5 million gift from Salesforce to Oakland schools. A new charter school is being proposed in his district as well, providing what Harris says are more choices for students and families.

But he says this is just the first steps of recovery. “We’ve got to figure out a way to get more money into the system,” Harris said.

Ultimately, though, the main goal now should be ensuring equity for all students. And not everyone thinks Oakland’s schools are on the right path.

Some worry the term “equity” has been co-opted to support continued privatization under charter schools, and that a few wealthy philanthropists are steering district policies, often in controversial directions with little say from the community.

“We got involved because there hasn’t been input from parents and teachers and other groups in a lot of big decisions,” said Kim Davis, a steering-committee member of the group Parents United for Public Schools.

According to Davis, several controversial plans have been hatched recently by administrators and outside groups linked to the charter-school industry. The blessing of the school board has been sought as an afterthought, and the community was taken by surprise.

One example was common enrollment, a controversial proposal to create a single application for students to simultaneously apply to all OUSD public schools and charters in the district. Currently, OUSD allows families to apply at all its public schools at once, ranking their top choices. But if a family wants to send their kid to a competing charter school, they have to fill out a separate application.

Implementing common enrollment would cost $1.4 million extra, and it would likely increase the number of students leaving district public schools while boosting enrollments at the charters.

It was developed quietly by Educate 78, a spinoff of the New Schools Venture Fund that helps establish and grow charter schools.

“It felt like a process where they were just checking off boxes, you know, ‘community engagement — done,'” Davis said about how the proposal was unveiled to parents.

In response to the mounting influence of the charter-school industry, Davis’ group wants to unseat most of the current board members who are up for re-election.

And there are other community groups, many newly formed, getting more involved in the district’s politics.

Mona Treviño, a mother and organizer who lives in East Oakland, said there are small networks sprouting up around different campuses and neighborhoods across the city, and they could become a force in district elections. Many of these groups are upset with the charter-school industry’s sway with OUSD’s administrators and the current board.

Chris Jackson, one of the insurgent candidates endorsed by Davis’ group who is running for the district seven seat, criticized Harris for supporting charter schools and his role in eliminating committees of the school board.

“We’re in danger of creating a two-tiered system where resources are sucked away from district schools,” Jackson said. “Charters aren’t serving our African-American students, and they don’t serve special-needs students, while they suspend students at two-and-a-half times more than district schools.”

Jackson says Harris has been unwilling to slow the expansion of charters despite criticism, such as the recent Alameda County Grand Jury report showing that charters are poorly regulated. He also pointed to a recent report by the ACLU of Southern California showing that many of Oakland’s charters have exclusionary and illegal enrollment policies.

Harris counters that charters provide choices to families that have been historically under-served by the public school system. He also added that the last three charters were granted only on the condition that the schools increase the number of Black students enrolled, provide more special-education services, and change discipline policies so that students aren’t easily suspended and expelled.

Harris also said he still supports common enrollment despite the vigorous opposition it ran up against earlier this year. “That was the temperature check, so we decided not to adopt any changes,” he said. “But we have to repair the existing system because it’s broken.”

In district one, London is being challenged by Don Macleay, who claims that London, Harris, and others on the board have failed to keep watch over the district, and that they have given Superintendent Antwan Wilson too much leeway to set policy. “The board should be overseeing the district, but I don’t think they’re doing it,” he told the Express.

In public forums, Macleay has voiced his concern about the district’s students. He says the board should declare Oakland’s truancy and drop-out rates an emergency, and focus resources on keeping kids in school, so they don’t fall into the clutches of the criminal-justice system.

Mike Hutchinson is another reformer hoping to put a check on charter schools and expand the policy-making power of the board, which remains weak in relation to the superintendent’s office. He and three other candidates are running against incumbent Roseann Torres.

Torres was elected in 2012 with support from the charter-school industry, but she quickly fell out of favor after opposing some charter-friendly proposals such as common enrollment. One of her big achievements was passing a new ethnic studies curriculum.

Hutchinson, a well-known education activist, wants to implement a moratorium on new charter schools in order to force the district to focus its resources on improving its public schools. His main critique of Torres is that she hasn’t been firm enough in defending public schools.

Two of the other candidates for district five work in the charter-school industry. One of them, Huber Trenado, is a teacher at the Lazear Academy, an Education for Change charter. His campaign is being heavily supported by pro-charter organizations and individuals, including members of the Rogers family, whose wealth comes from the Dreyers Grand Ice Cream company.

The Rogers have spent millions over the past decade funding pro-charter school initiatives in Oakland through their family foundation. The other candidate running for district five, Mike Hassid, works for a technology-consulting firm whose clients include charter schools.

In district three, four candidates are aiming to replace incumbent Jumoke Hinton-Hodge. One of them, Kharyshi Wiginton, has earned the Parents United endorsement for her reform positions that are similar to Hutchinson, Jackson, and Macleay’s.

Hinton-Hodge will be hard to beat. She’s endorsed by London and Harris, as well as Oakland Mayor Libby Schaaf, and has financial backing from deep-pocketed pro-charter sources like Laurene Powell-Jobs, the widow of deceased Apple co-founder Steve Jobs. One of Powell-Jobs’ nonprofits, the XQ Institute, announced last month that it intends to spend $10 million to open another charter in Oakland.

Outside money is likely to play a big role in this year’s school-board races. In addition to being able to tap wealthy individuals like the Rogers family and Powell-Jobs for support, pro-charter school candidates such as Harris, Hinton-Hodge, and Trenado are also benefiting from independent spending by a committee that’s funded largely by Arthur Rock, the Silicon Valley billionaire investor.

Earlier this year, Rock contributed $49,900 to Families and Educators for Public Education, a campaign committee set up by GO Public Schools. This committee has already made the maximum allowable contributions of $1,500 directly to Harris, Hinton-Hodge, and Trenado’s campaigns. And, as of last week, Families and Educators for Public Education reported independent expenditures of $14,701 to support Hinton-Hodge, $26,433 to support Trenado, and $37,042 to help Harris in his race.

Jackson’s total haul to date is only $9,622, a fraction of what the pro-charter committee will independently spend to support his opponent Harris. Wiginton has only raised $2,315. Hutchinson hasn’t filed a campaign-finance disclosure form yet, but his campaign is said to be running on a shoestring budget. None of them have benefitted from independent expenditures by a third party, according to records filed with the Oakland City Clerk.

The role of big money in local races is controversial. For some, big expenditures by political action committees funded by Silicon Valley elites reflects mainstream support for candidates who are promoting innovation and market-based solutions to the problems besetting Oakland’s schools. For others, big outside donors distort the democratic process.

“They’re spending their money to preserve a school board that is far too comfortable allowing groups like GO Public Schools, Educate 78, and the California Charter Schools Association to influence what happens in our district,” said a skeptical Davis.

“They’ll dump as much money as they have to into this race,” Jackson said about pro-charter groups. “But we’ll fight them with facts, by having conversations with neighbors and parents and families about the impacts their policies are having.”

Correction: the original version of this story stated that Salesforce’s recent $2.5 million donation was to the Frick Impact Academy. The donation was in fact made to all Oakland schools.