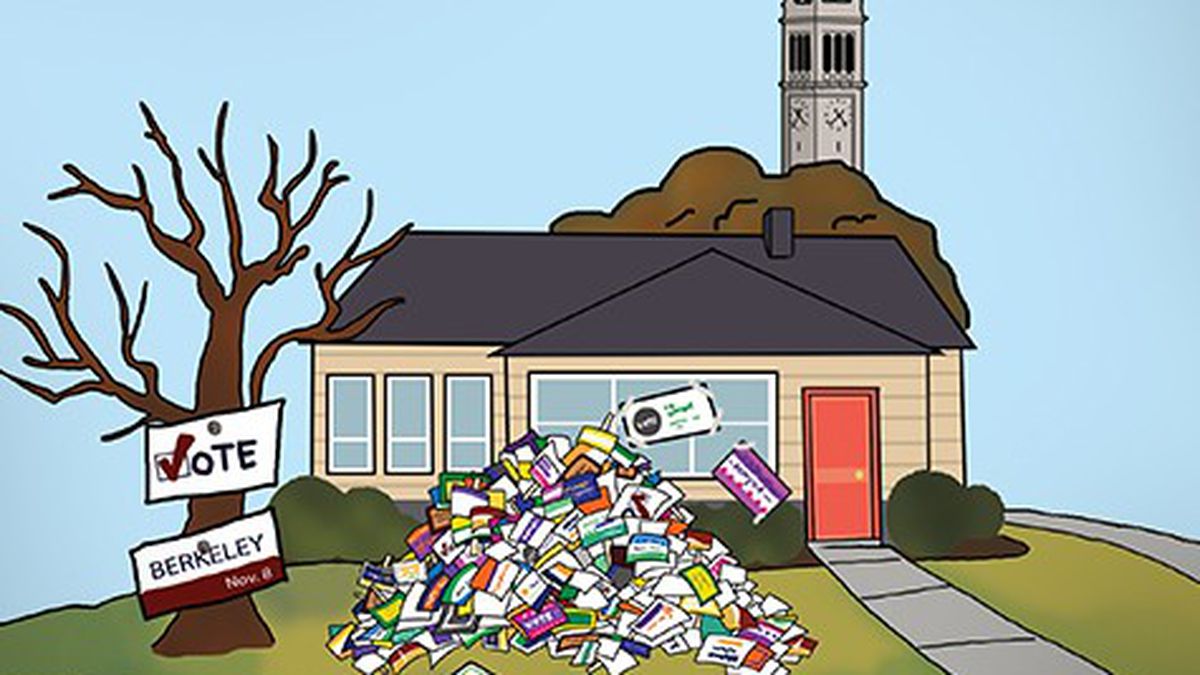 No single seat is likely to shift the city's political spectrum completely to the left or center, but the sheer number of vacancies this year is unusual.

Election Day looms, tree leaves are showing their autumn hues, and the front lawns and storefront windows of Berkeley are growing crowded with equally colorful campaign signs. But none of the twelve candidates vying for four city council seats are going with traditional red, white, and blue schemes. In Berkeley, the preferred visual palate for electioneering materials includes earth tones, neon, sunbursts, and soft shades of liberal blue and enviro green.

This spectrum mirrors the diversity of liberal thinking on Berkeley’s council, which this November could either swing substantially to the left, or remain in the control of the current moderate majority.

Consider the race for district five — an open seat being relinquished by mayoral hopeful Laurie Capitelli.

The contenders are Sophie Hahn and Stephen Murphy. Hahn ran for the seat in 2014, but was defeated by Capitelli. She did manage, however, to garner 46 percent of the vote, signaling substantial support among North Berkeley voters.

She’s the progressive in the race, and her efforts to promote the Berkeley Edible Gardens Initiative have earned her the support of local culinary celebrities Alice Waters and Michael Pollan.

The two candidates, like many Berkeley electeds, have much in common. Both Hahn and Murphy support the Downtown Area Plan, a set of voter-approved development rules meant to spur housing construction while preserving historic assets.

However, in 2014, Hahn supported an effort to limit building heights and strengthen LEED rating requirements. But Murphy said these demands would have “killed” the Downtown Area Plan.

Their split is representative of the ongoing debate over how to incentivize construction of housing in Berkeley.

East Bay Forward, a housing-advocacy group that focuses on easing zoning and development rules to spark construction of market-rate projects, has endorsed Murphy, as well as the incumbent council members Susan Wengraf and Darryl Moore.

Garret Christensen with EBF argued that Berkeley’s progressive minority advocates for excessively strict green initiatives and regulations that “let the perfect be the enemy of the good.”

But Rob Wrenn, a member of the Berkeley Progressive Alliance, likened the split on housing to the long-running, back-and-forth debate over the city’s minimum wage. That issue was settled earlier this year by an ordinance that served as a compromise between two now-invalid ballot measures.

BPA has endorsed newcomer candidates Nanci Armstrong Temple, for district two, and Fred Dodsworth in district six. But some progressives are running as teams in a bid to unseat the incumbents via Berkeley’s random-choice voting.

Dodsworth and fellow district six challenger Isabelle Gaston acknowledged that they are using ranked choice to be more competitive against Wengraf. “While [Gaston and I] disagree on many topics, one of the things we don’t disagree on is an incredible need for change,” Dodsworth said. “This council, which has been co-opted by developers, is no longer serving the city well.”

In district two, Moore’s challengers include dance studio owner Nanci Armstrong Temple and Human Welfare and Community Action commissioner Cheryl Davila. Temple and Davila are also running as a team, though they are not formally collaborating. However, Davila has contributed to Temple’s campaign fund, and Temple said there is “a lot of overlap.”

Temple hopes to pull in votes by raising the issue of police accountability in Berkeley. Her campaign website claims that community-police relations have been “severely damaged by the actions and policies of the [Berkeley Police Department].”

Citing a spate of recent shootings in the city, Moore has worked to hire five additional BPD officers. Temple said that while she “sympathized with that fear” and the desire to want more cops, she said she would focus on structural problems, such as housing, in order to reduce crime. She also criticized Moore for his support of Urban Shield, a disaster-preparedness exercise that includes SWAT team training and a weapons show.

Matthews, who has also chaired the Zoning Administration Board and the Housing Commission, bears the endorsement of Wengraf and Capitelli. She said she has tried to be the “voice of the underserved” when serving on commissions.

Bartlett, who is on the Loan Administration Board and also on the Planning Commission, boasts the support of the progressive bloc, including current district three Councilmember Max Anderson and mayoral candidates Kriss Worthington and Jesse Arreguin, as well as sitting Councilmember Lori Droste.

Coplan and Bartlett have both said they will halt the proposed closure of Alta Bates Summit Medical Center. Matthews said she would promote a ‘housing-first’ approach to reducing homelessness, and has stated her support for the proliferation of in-law units as a way to increase the city’s stock.

No single council seat is likely to shift the city’s political spectrum completely to the left or center, but the sheer number of vacancies this year is unusual. Should the more progressive candidates sweep the races, the implications could be significant, regardless of who replaces Bates.

And, for those who enjoy Berkeley’s political theater, it’s reason to keep an eye on more than just the mayor’s race.

Correction: the original version of this story stated that Stephen Murphy has been endorsed by several construction companies. That was incorrect. His endorsers include building trades unions.