Sequoia Diner in Oakland's Laurel district is serving up some of the best breakfast dishes in the East Bay. 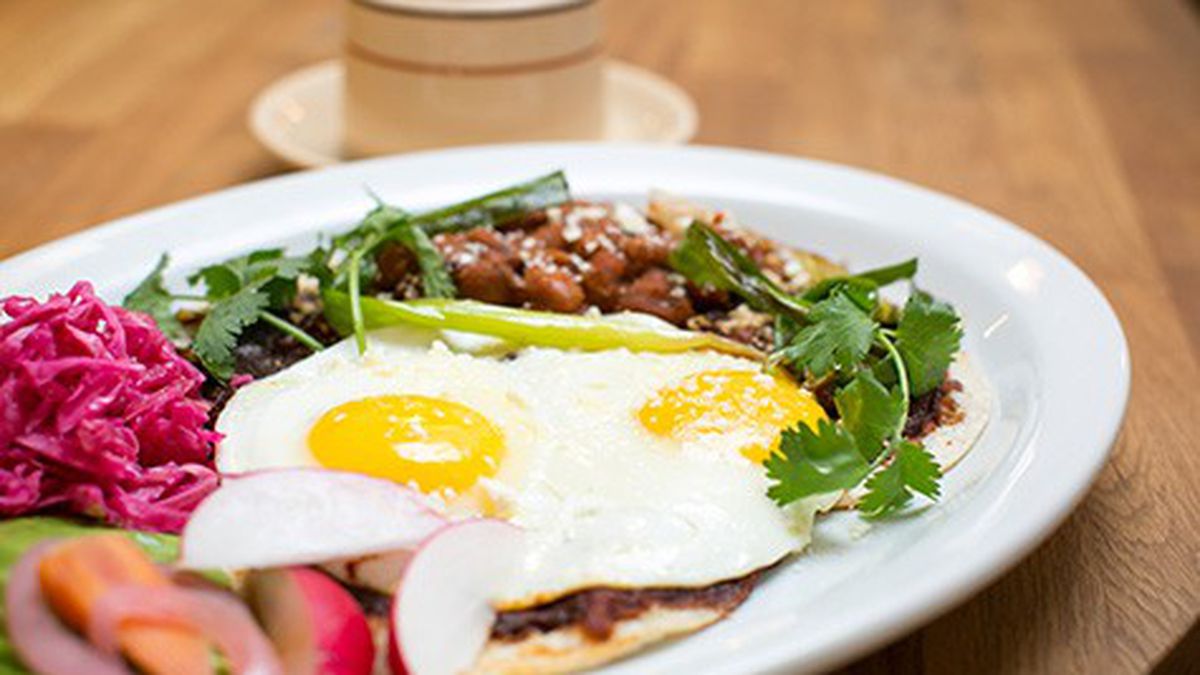 Breakfast, long touted by nutritionists and scoldy parental units as the most important meal of the day, often gets the short end of the stick at restaurants, where it’s either deemed unworthy of the attention of “real” chefs or relegated to weekends only — a vehicle to sell mimosas more than anything.

Sequoia Diner aims to change that perception. Chef Andrew Vennari’s previous stints were at high-end Oakland restaurants Duende and Camino, and his wife Sequoia Vennari, who runs the front of the house, waited tables at Berkeley’s La Note for the better part of ten years. When the Vennaris learned that the owner of the Full House Cafe — a beloved breakfast institution in Oakland’s Laurel district — was retiring, they jumped at the opportunity to open their own breakfast-and-lunch spot. They fell in love with the retro-style diner counter and red leather booths. They tore out the old carpet and put up a fresh coat of paint. But mostly they kept the place the same.

The idea was to reimagine the old-fashioned American diner, but to update those classics — mostly breakfast, but also some lunch dishes — with a sensibility informed by the chef’s stints at high-end California-inflected restaurants and the seasonal, sustainable ethos that comes along with that. It’s an effort not so much to create something entirely new, but rather what the owners imagined a breakfast restaurant might have looked like seventy or eighty years ago, when it was commonplace for folks to bake their own bread and practice the arts of food preservation. So, Andrew cures and smokes the bacon and produces several different kinds of sausages in-house, the eggs are pasture-raised, and the bulk of the produce is of the handpicked-at-the-farmers’-market variety. I encountered more avocados and kernels of sweet summer corn during a single meal here than I did at all of the diners of my New Jersey youth combined.

Still, the food at Sequoia Diner never strays too far from the classic diner playbook of omelets, sausage links, and hot coffee. And the prices — while perhaps not the biggest bargain in the landscape of cheap American restaurant breakfasts — were more reasonable than I expected. While it might be tempting to romanticize the endeavor, no one at Sequoia Diner is trying to reinvent the wheel. As Andrew put it, “We’re selling eggs and potatoes here.”

Of course, eggs and potatoes can be a beautiful thing in the hands of a skilled chef or short-order cook — even in something as simple as a breakfast sandwich, which at Sequoia Diner is a classic combination of a decadently cheesy, folded-up egg omelet and salty meat (bacon or a sausage patty), plus a generous slather of garlicky aioli that puts the whole thing over the top. The sandwich comes on a house-baked English muffin by default, but if, like me, you understand that a buttermilk biscuit is the greatest vehicle for a breakfast sandwich, it’s no problem to sub in what is, arguably, the restaurant’s best item: an intensely buttery biscuit with a crisp exterior crust and an interior crumb that’s so delicate, it’s almost cake-like.

Let’s not mince words: Dollar for dollar, this is as delicious a breakfast sandwich as you’ll find in the East Bay.

Those who gravitate toward the sweet side of a breakfast menu will go crazy for Sequoia Diner’s thin, airy-light, exceptionally crisp waffles, which had wonderful frilly edges all around their circumference. Topped with strawberries and melted butter, they give the cornmeal waffles at Brown Sugar Kitchen — previously without peer — a run for their money.

Each day’s menu is loaded with California touches, mostly in the form of unexpected — and unexpectedly abundant — vegetable preps. A weekend special beef hash featured fatty, slow-braised beef chuck that was shredded and fried on the griddle with shredded potatoes — a diner-y dish, except that it was paired with wide shavings of raw carrot dusted with freshly grated horseradish. The huevos rancheros, that classic Mexican breakfast that Californians have adopted as their own, was the prettiest version I’ve ever seen, thanks to a veritable veggie rainbow: pale-green avocado, orange carrot slices, a charred scallion stalk, pickled red onions, and the purple-pink of a fresh red-cabbage sauerkraut — an unlikely addition that Andrew said was inspired by the curtido that Central Americans eat with pupusas. There was also the reddish-brown of the soft-cooked pinto beans, dusted with snow-like cotija cheese, and the bright yellow of the over-easy egg yolks and the brick-red of the chili sauce — all of it wonderful when mixed together and scooped up with corn tortillas.

And one of my favorite dishes wasn’t much of a diner staple at all. Instead, it was a kind of scramble of summer corn, sweet Sungold cherry tomatoes, poached eggs, and slices of smoky house-made chorizo. You wound up with the most delicious sweet-and-spicy broth, enriched by the oozy egg yolks, everything scooped up with toast.

Still, what I liked best about the restaurant is that it retains much of the charm that makes old-fashioned lunch counters such an object of nostalgia. In that sense, Sequoia Diner feels more like a loving homage to the genre rather than a winking, self-congratulatory one. The diner counter and the vintage red leather booths have been cleaned up a bit, but they’ve otherwise been left as they were. The coffee, courtesy of Emeryville-based Highwire Coffee Roasters, is of a higher quality than you’d expect from your average greasy spoon — but it’s poured from the same kind of no-nonsense glass pot you’ll find at roadside dives across America. Refills are free and plentiful, as they ought to be. (I appreciate pour-over coffee that’s brewed to order, drop by drop, as much as the next person, but that kind of fussiness has no place in a diner.)

All that, and I still haven’t mentioned the restaurant’s secret weapon: Tom Purtill, the full-time baker and pastry chef, who previously made all the baked goods at Berkeley’s Elmwood Cafe. Purtill is the one responsible for the aforementioned biscuits, as well as an array of house-baked breads. And he spins out a daily selection of pastries that would be the envy of any number of artisanal bakeries in the Bay Area. The various fruit danishes (topped with whatever Andrew had picked up from the farmers’ market for the week) and other croissant variants are masterworks of laminated pastry-making — crisp-bottomed and exceptionally flaky. Most mornings, he makes some kind of pie, too, that’s ready to be sliced up by around 10 a.m.

I never made it for lunch service, when you might order a patty melt or rye toast topped with chicken liver, but the Vennaris said they’ll soon be expanding that part of their repertoire. And their recently approved beer and wine license means they can now start pouring mimosas and micheladas, as well as a selection of natural wines.

As with any good neighborhood brunch spot, the weekend crowds are a force to be reckoned with. But if you can manage to work it into your schedule, the most pleasant time to visit Sequoia Diner is early on a weekday morning, when the sunlight floods through the plate glass mirrors, and you can cozy up to the counter with a newspaper and a cup of coffee. Such pleasures are timeless indeed.