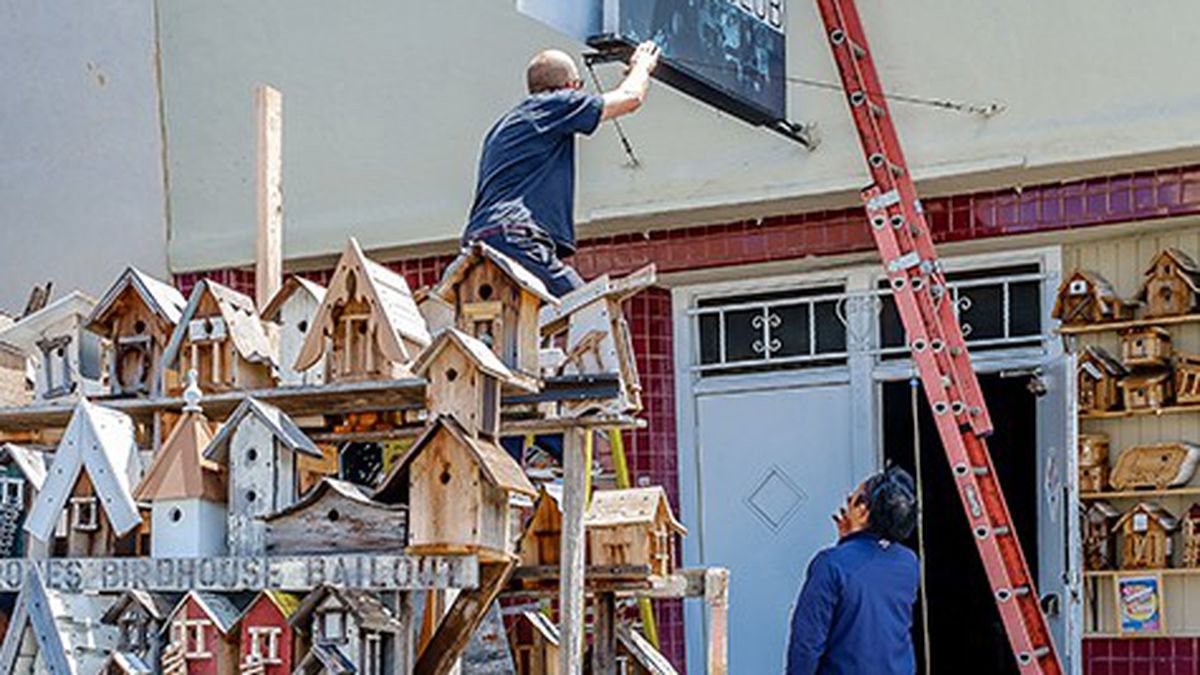 Can Birdland Take Flight in Its New Location?

The much-loved fixture of the Berkeley music scene hopes to inspire a new arts district in Oakland.

Birdland, a fixture of the Berkeley music scene, is in the process of transitioning from a late-night, semi-underground (and repeatedly fined) gathering to a public, licensed venue in the renovated Tea Cakes cocktail lounge in Oakland (4318 Martin Luther King Jr. Way).

Birdland, which originally evolved from ethnic studies professor Michael Parayno’s neighborhood barbecues in 2010 to become a long-running weekly jazz and blues series, has spent several weeks in “soft launch” mode while Parayno navigates Oakland’s permit system. And in the short time it’s been open in its new form, Birdland has already drawn a mix of familiar faces (community members refer to themselves as the Jazzista Social Club) and first-timers from its new neighborhood, in addition to bringing in local and visiting musicians such as jazz trumpeter Ambrose Akinmusire and saxophonist Camille Thurman.

On a recent Friday night, performer Yacine Kouyate, a Mali-born multi-instrumentalist and molecular biologist, stood near Birdland’s exterior display of recycled-material birdhouses — built by Parayno — while welcoming show-goers, accepting admission fees, shaking hands, asking names and introducing himself. The informal, personal nature of Kouyate’s interactions differ from what’s seen at typical music venues, but as Jazzista stalwarts like Floyd Tolliver, manager of the group Purple Smoke and longtime emcee at Birdland, put it: “We’re not a nightclub, we’re a social club.” Both Parayno and Tolliver are fond of telling visitors, “This is your house.”

“People can just be themselves,” Parayno said. “Everybody kind of knows everybody after a while. Eventually you get to six degrees of separation or two degrees of separation. … It used to be that way in the United States, but now everyone is so spread out. People just want that connection.”

Over Birdland’s four-year run, that friendly spirit has appealed to jazz fans such as Debra Saunders, who described Birdland as her “lifeline” when she first moved to the area.

“There was something organic and soulful” about the Jazzistas’ former space in a cozy, brick-paved garage, Saunders said. She added that the new space retains the old location’s charming touches: black couches, folding chairs, birdhouses, and neon signs. “It’s just an exciting thing to be a part of,” she said.

Many residents and business owners from Birdland’s new surroundings seem to agree. “Thirty-five to forty people from the neighborhood have come by to ask what they could do [to help],” Tolliver said. About a half-dozen nearby businesses have hosted weekend music performances (partly underwritten by Birdland and Parayno), with an eye toward building an arts district.

Contributing to that are businesses such as Marcus Bookstore and the MLK Café, which have hosted live shows in the past and will do so once more starting September 5, according to Parayno, who hopes to schedule additional music events in the area after Birdland is more established. Parayno plans to throw more shows — currently, Birdland is only open Friday and Saturday, with two bands performing each night — and expects to raise proceeds for the shows from a combination of cover charges, annual membership fees, private events, an Indiegogo campaign, and possibly a profit-sharing arrangement with a pop-up cafe.

The vision of a neighborhood bustling with musicians reflects Birdland’s early days. When Parayno started throwing events in his Berkeley backyard, the people who came were mostly other musicians, Tolliver said. “People wanted to come hang out and play. We weren’t trying to have a nightclub.”

With the new Oakland location, Parayno hopes to retain the feeling of a social club while attracting larger audiences.

“It’s like a home,” said trombonist and band leader Jonah Levine, who was one of the first Berkeley High School students to play at Birdland, and who helped connect Parayno with a larger community of music students.

Birdland plans to continue partnering with young musicians “to keep the music alive,” Tolliver said, adding that the Jazzista Social Club also hopes to team with teachers who can provide music lessons. In addition, Birdland will offer classes in dance and movement and plans to schedule salsa music at least one night a week, Parayno said.

Parayno’s energy and enthusiasm tend to draw people in. One of those people was blues harmonica player Tenere Richmond, who spoke of Birdland’s consistently high-caliber music, and has been involved with the Jazzista Social Club for two years, partly in the role of performance videographer. “I was starving for live music,” he said. “With this group, I found community and music.”

Similarly, sommelier and former New York City pedi-cab driver Julien Weiller jumped in to help at Birdland’s Berkeley location years ago, soon after driving cross-country to California with his mastiff-Labrador retriever Herschel (Birdland’s unofficial mascot). Weiller describes Parayno as a teacher and social entrepreneur who engages people and “points them in the right direction.”

Levine is among the many people who believe in Parayno’s plans to make Birdland into a thriving music and art district. “When he sees something is possible, he makes it happen,” said Levine. “I have no doubt it will become a whole new scene.”

“Should Marijuana Be Legalized?”: The New RAND Analysis

Best Place to Practice a Woman’s Right to Choose

Watch ‘The Haag’ Mock Our Esteemed Local US Attorney