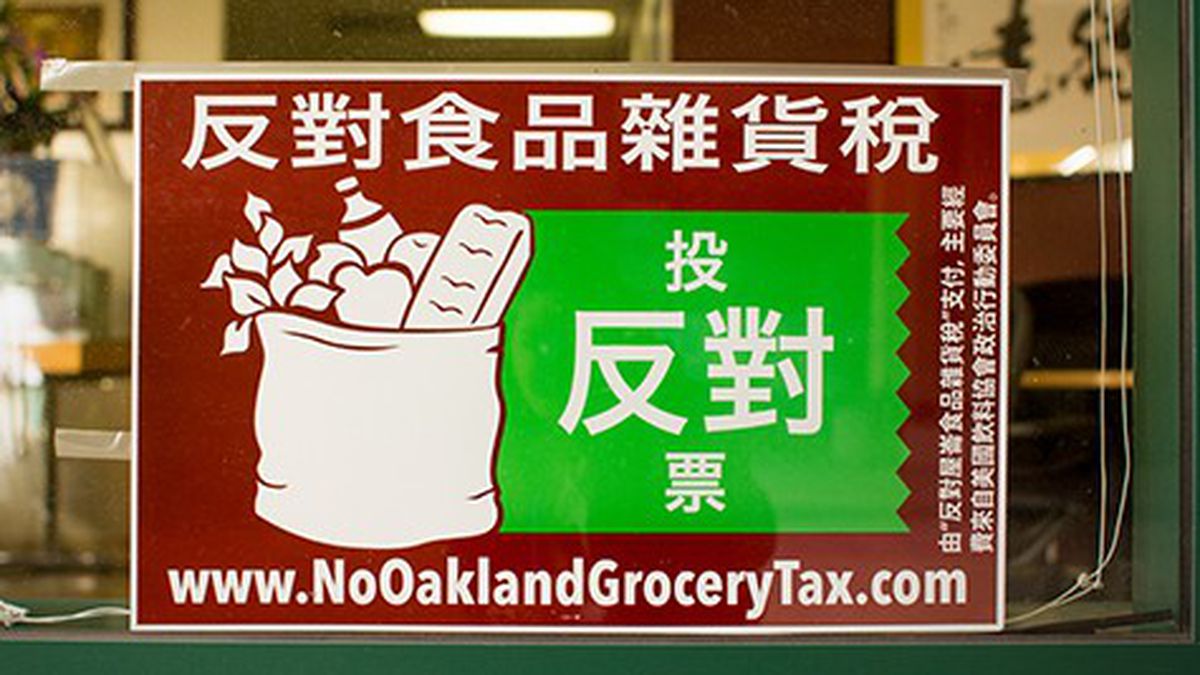 "Everything they're putting out is a lie."

Say what you want about the power and influence of “Big Soda,” the beverage industry’s game plan to defeat soda-tax measures is remarkably consistent: identify low-income and minority groups, label the tax regressive and unfair, then watch it fail. It’s worked for the industry already in forty cities and states across the country, and they hope it will work in Oakland and San Francisco this November.

Despite contributions of nearly $4 million in favor of Oakland and San Francisco’s soda-tax measures —making Measure HH one of the Town’s best-funded initiatives ever — tax proponents have been unable to match the spending power of multibillion-dollar soda corporations. The American Beverage Association has already thrown more than $13 million on ads to fight Measure HH and San Francisco’s Proposition V this election season.

And “Big Soda” has actually employed a new strategy with its Bay Area campaigns: labeling the soda tax a “grocery tax.”

The opposition claims that the measures will raise prices on items such as broccoli, milk, and even diapers. Anti-soda tax commercials feature Latino, Black, and Asian store owners stating that they’ll have no choice but to increase prices across the board to compensate for lower margins on sugary beverages.

Oakland Councilwoman Annie Campbell Washington called this campaign “reprehensible.” “Everything they’re putting out is a lie,” she told the Express. “They’ve gone to small business owners to tell them lies, and they’re now using [community members’] faces to endorse their cause.” She also explained that this deception was “compelling” to viewers, because it appears authentic.

Beverage company spokesman Joe Arellano defended the ads, stating that they “reflect the community that would be most impacted by these types of highly regressive grocery taxes.” He said that they’ve reserved more than $9 million in television advertising for the last leg of the campaign.

Council members in Oakland, led by Washington, have filed complaints with the Federal Communications Commission and the city’s Public Ethics Commission concerning the language used in the anti-tax campaigns. The response? It is not illegal for the soda industry to lie.

So far, the American Beverage Association has released more than 28 television and online ads in the Bay Area featuring local grocers denouncing the tax.

“I think the money invested, in addition to the framing — which is specifically not mentioning sugary beverages — suggests that there’s a lot of defense in their offense,” said Wendi Gosliner, policy researcher at UC Berkeley’s Nutrition Policy Institute, of the spots.

One commercial released at the start of the campaign features Kay Kay Amamgbo, owner of the African Caribbean Food Market in Oakland. The ad makes an effort to show Amamgbo handling as much fruit and vegetables as possible, but shies away from featuring the sugary beverages that the tax would actually impact.

Many point out that Amamgbo and other critics have a legitimate gripe about the tax’s regressive nature; it will hit low-income consumers the hardest, as data shows that they are the foremost purchasers of sugary drinks. Consumers can expect to see a soda excise tax of one cent per ounce if the Oakland measure passes.

Pat Crawford, senior director of research at the Nutrition Policy Institute, said that justifying the soda tax to the low-income community in Berkeley was an essential part of getting it passed in 2014. NPI hosted multiple town halls when that tax was on the ballot. They invited professors, doctors, and health-care professionals to address the community’s concerns. She explained that the debate raised awareness concerning the public-health hazards of sugary beverages, a critical factor in the 21 percent decrease in the consumption of sugary beverages in Berkeley.

“People think of soda as just another candy or food, and it isn’t,” Crawford said. “[The negative impact on public health] is just too costly … for us to ignore.”