.Beatriz at Dinner: It’s Later than You Think

Salma Hayek tangles with the gentry. 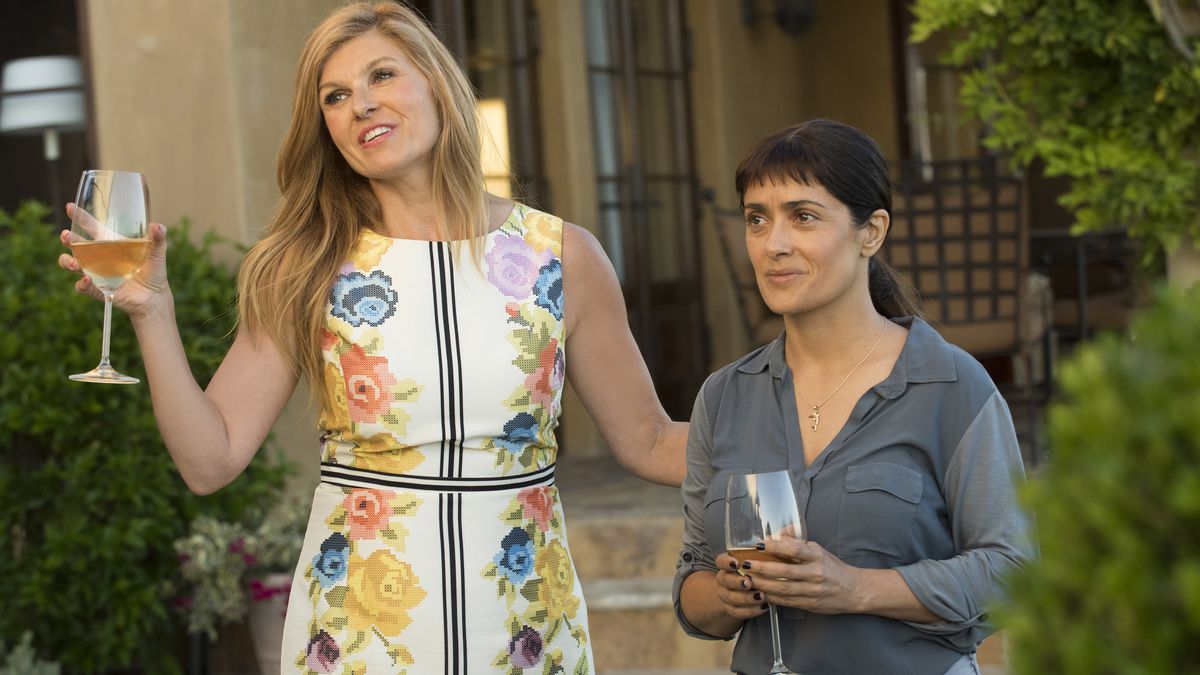 By sheer coincidence, a Mexican immigrant nurse/caregiver of modest means gets invited to dine with a pack of rich white people in a seaside mansion. That’s the setup for Miguel Arteta and Mike White’s Beatriz at Dinner, a singularly appropriate drama of manners for the new Gilded Age. It’s a situation as deliciously dangerous as dynamite, handled with a combination of velvet gloves and cold steel.

The title character, played by Salma Hayek with minimal makeup and a serious demeanor, is a calm, interiorized woman who provides massage and various healing therapies at a Los Angeles cancer center. She lives alone except for her pet dogs and goats, whom she adores. To make ends meet, she also visits patients in their homes. It is at the palatial house of longtime client Cathy (Connie Britton), in a gated community in Newport Beach, that Beatriz’s car breaks down – whereupon Cathy invites Beatriz to join her and her husband Grant (David Warshofsky), who are hosting a couple of their business friends and their wives.

That seemingly innocent get-together turns out to be a contender for the Awful Dinner Party Hall of Fame. While a team of servants prepares the meal, the men, including the aptly cast John Lithgow as a heavy hitter real estate developer and Jay Duplass as his toady, guffaw loudly about how much money they’re making. Doug (Lithgow) can’t resist elaborating on his African safari big-game-hunting exploits. Meanwhile the small talk of the wives – Chloë Sevigny, Amy Landecker, and Britton – revolves around beauty treatments and reality TV stars.

In the midst of this, quiet, polite, brown-skinned Beatriz is an afterthought. The other guests breeze right by her, and when they finally notice her they assume she’s the hired help – which in fact she is. When alpha male Doug gets around to interrogating her, the first thing out of his mouth is, “Are you here legally?” Beatriz tries to break the ice with a simple story of her father and an octopus – in this gang of privileged plutocrats that amiable gesture is completely incomprehensible. Naturally something’s gotta give.

We don’t see many mainstream movies that address contemporary socio-economic inequality so directly. Usually a film makes the point tangentially, as a means of identifying a character or setting a scene. None of that pussyfooting around for director Arteta and his frequent writing partner White. From their discomfiting 2000 character study Chuck & Buck, through such veiled social commentaries as The Good Girl, Youth in Revolt, and Cedar Rapids (White collaborated with Arteta on the first two titles), the outlook is decidedly skeptical and frequently quite bitter.

We’d have to go back to Luis Buñuel or even Sergei Eisenstein to observe such unflattering stereotypes of self-satisfied haute-bourgeois squires, as are on display before Beatriz’s hurt gaze. Hayek sketches in Beatriz’s bewilderment deftly, with a few careful strokes. Likewise, Lithgow delivers the cold killer’s smile of the predator with utmost precision – we’ve seen that face before, in countless corporate publicity head shots.

At one point, after Doug pontificates on the subject of “manifest destiny” (still a capitalist rallying cry more than a hundred years after President William McKinley!), Beatriz can contain herself no more. “Try healing something!” she exclaims to her table mates. As she views it, their comfortable lives are built on other people’s pain. Cathy, Grant and their house guests don’t quite know what to make of this strange woman. They’ve probably never had a servant talk back to them before. As Beatriz storms out of the room, a voice floats a compensating putdown: “Does she get out much?” Obviously not with wolves like these. Yet we can’t help thinking that it’s Doug and his friends who urgently need to get out of their walled compounds and mingle with people like Beatriz, before it’s too late.