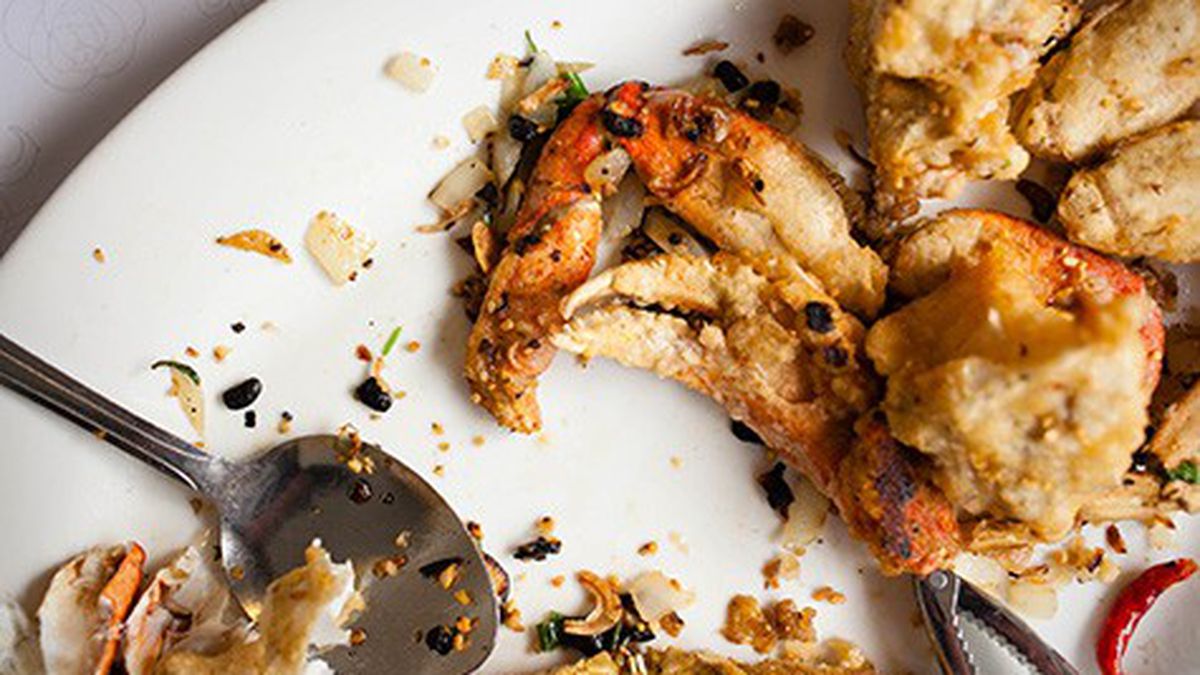 Amid the sea of modern-looking cafes and upscale boutiques that populate today’s Uptown Oakland, Bay Fung Tong Seafood Tea House sticks out: It’s an old-school Cantonese restaurant with a weathered, Chinese-style facade, located just around the corner from Uber’s soon-to-be East Bay headquarters. Even as you read this review, some billionaire technocrat is probably plotting to bulldoze the restaurant and turn it into a co-working office or a parking garage for a set of luxury condos.

But let’s hope that never happens — not to a restaurant that has been serving some of the city’s best and most affordable Cantonese food for more than a decade. This despite the fact that the restaurant is relatively unheralded. It’s something of a secret hidden in plain sight, thanks to its rather unexpected location, several blocks away from Oakland’s Chinatown.  (The manager at Bay Fung Tong never returned my phone calls, so I’m hard-pressed to offer any kind of definitive history, but records seem to indicate that the restaurant opened in 2003 — in other words, several years before “uptown” became Uptown.)

A word of caution: This isn’t one of those Chinese restaurants where you can pick a menu item at random and feel confident that what you ordered will be, if not delicious, then at least a verifiable example of Real Chinese Food — not just something meant to “trick white people,” as my immigrant parents are fond of saying. The menu is littered with fried wontons, moo shu, and other similarly generic, Americanized fare. You have to work to find the good stuff. Otherwise, you’ll wind up like me during my first lunch visit: sadly picking at a plate of bland, pillowy potstickers with no discernible crust.

Your best bet is to stick to the Cantonese-style seafood dishes. But even then, Bay Fung Tong doesn’t exactly make things easy. The entire “live seafood” section of the lunch menu — which is to say, most of the best dishes — isn’t even included on the dinner menu. Our server explained that this is to avoid confusion, since the prices of those dishes fluctuate with the market rates for seafood. But it also means that, unless you think to ask, you won’t know about the restaurant’s seven different preparations of lobster and crab — in fact, you probably won’t even realize that the place serves lobster and crab.

But if you’re a Bay Area crab fanatic who spent the past winter waiting for the long-delayed Dungeness crab season to start, Bay Fung Tong is one of the best — and least expensive — options in town. During my recent visit, I paid $8.99 a pound, which is only marginally more than what most markets have been charging for Dungeness crabs in an uncooked state. Tack an extra $3 onto the total, and you can get your crab cooked “Bay Fung Tong” style, which is the restaurant’s signature dish — and the one dish you’d be a fool to miss.

Bei fung tong is the Cantonese term for a kind of typhoon shelter that’s prevalent in Hong Kong. During the Sixties and Seventies, these protective harbors were home to hundreds of fishing boats and floating restaurants, where a distinctive food culture arose, of which the “bei fung tong” style of fried crab is probably the most famous dish. It’s a whole crab cut into segments and batter-fried, then buried under a mound of crispy fried garlic, sliced chilies, and salty fermented black beans. In Bay Fong Tong’s version, that savory-spicy topping also included bits of pickled turnip and, surprisingly, some kind of pork that was vaguely reminiscent of bulk Italian sausage. It’s a knockout dish, delicious as a vehicle for white rice — especially the clumps of briny deep-fried crab “butter” tucked inside the carapace.

To my knowledge, Bay Fung Tong is the only Chinese restaurant in Oakland that offers this preparation — there are also equivalent “Bay Fung Tong style” dishes featuring lobster, squid, or scallops. Other ocean-centric dishes are more along the lines of what you’d find at a typical Cantonese seafood restaurant. The steamed sea bass topped with scallions and ginger is a classic dish that I’ve eaten hundreds of times. Bay Fung Tong’s version was perfectly solid, notable mainly for how plump and meaty the fish was. On the other hand, an order of steamed surf clams was a mild disappointment: I liked that each of the oversized mollusks was presented on the half-shell, topped with glass noodles, so that the overall effect was akin to eating a bowl of clam noodle soup straight from the shell. But the clams themselves were sliced too thin and wound up overcooked and tough as a result. (Go to Great China in Berkeley for a much better version of the dish.)

Like many Chinese restaurants, the menu at Bay Fung Tong is lengthy enough that it would take months to explore in full. Apart from the seafood, though, my experience was a bit of a mixed bag. I had read a Chowhound post that said the restaurant makes its own XO sauce — a kind of dried-seafood-based chili sauce popular in Hong Kong. So, during one visit, I ordered the XO-sauce steak cubes, which were a good showcase for the classic Chinese pairing of stir-fried beef and celery — a delightful, refreshing combination that’s worth trying if you’re unfamiliar. I liked the extra oomph that the XO sauce provided, though the dish was a tad bit saltier and greasier than I would have preferred. The tofu with minced chicken, listed as a “house special,” veered a little too far on the other end of the flavor spectrum: It was slightly too bland for my tastes, though I liked the creamy texture of the tender tofu cubes.

No family-style Chinese meal is complete without a big plate of stir-fried greens. One of my favorite dishes was the tong choy (aka water spinach) with fermented bean curd. The tong choy were notably tender and wide-stemmed, and didn’t squeak between our teeth the way this particular green usually does. And I loved the salty funk of the fermented bean curd — a classic pairing for tong choy.

No one is going to dine at Bay Fung Tong for the decor, which can at best be described as no-frills. That said, I found the ambience appealing in its own low-key way. During weekday lunch, the crowd is a mixed bag of mostly non-Chinese office workers. But the one time I peeked my head in on a Sunday night — on Mother’s Day, as luck would have it — the dining room was crammed so full of Chinese families that I felt as though I’d been transported to a busy neighborhood joint in Hong Kong proper. Part of the appeal is that the restaurant has some of the most affordable and appealing banquet menus I’ve seen at a Chinese restaurant in the East Bay: $200 or $300 for a meal for ten that includes crab, lobster, and whole fish — all the good stuff.

It feels trite to say that you should order whatever you see Chinese people ordering when dining at a Chinese restaurant. But during my one lunch visit, as tables around me received one generic-looking platter of chow mein after another, I watched as one middle-aged Asian fellow — dapper with his striped tie and pressed white shirt — ordered a whole deep-fried sand dab: golden-brown, as wide as a dinner plate, and outrageously crunchy. The OG proceeded to debone that fish, slather it with Bay Fung Tong’s excellent chili sauce, and dispatch the whole damn thing in short order.

That, my friends, is how you eat lunch at a Cantonese seafood restaurant. As for that fried sand dab, I ordered it for dinner during my next meal at Bay Fung Tong. It was even better than I expected.