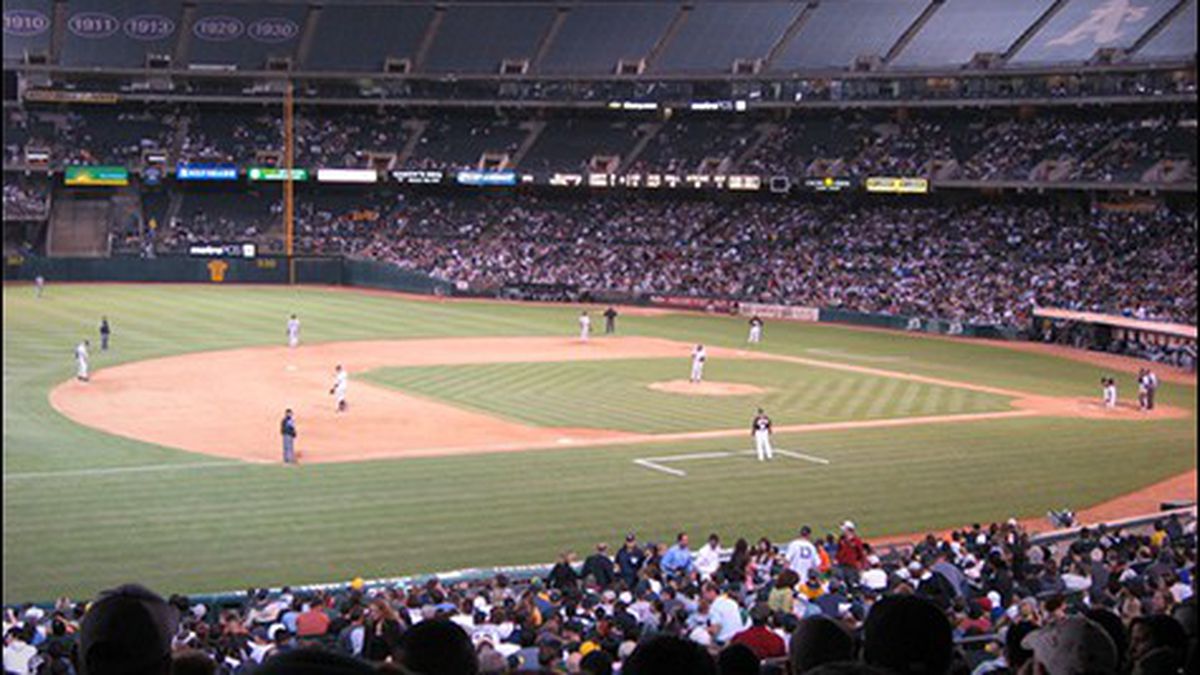 Back to the Future for East Bay Sports

It was the year of the third deck, dumb jocks, and clogged toilets.

It was like déjà vu all over again. Game 5 of the American League Divisional championship at the Oakland Coliseum. Detroit Tigers versus Oakland Athletics. Elimination game. Exact same way the 2012 season had ended. Tigers throw their ace, Justin Verlander, who had stood on the mound almost a year ago to the day. A’s toss out a rookie, ditto. Tigers score first. Been there. We don’t score at all. Done that. Seth Smith makes the last out. Second verse same as the first. With one notable difference.

This time we watched it all happen from the third deck.

2013 was the year we got to watch East Bay sports from a forgotten perspective. Since 2006, when A’s management closed off the Coliseum’s third deck with soul-crushing green tarps, you couldn’t buy a seat way above the field. They did this so that they could, um, sell fewer tickets …? But ownership relented just in time for this year’s postseason to remove the Green Monstrosities and allow us paying customers the chance to watch our boys from on high. And yes, we know that back in the day the story was that people used the upper reaches of the ball park to get high, making us wonder if the real reason for the prohibition was that Oakland management didn’t want to have to open another snack bar upstairs.

It also has been a year that demands a new set of narratives that moved us out of our sports groove. The Warriors are Sports Illustrated cover material, meaning they can no longer be the Little Engine that Keeps Trading away its Engineer and Caboose. The A’s have won the division two years running, meaning that Moneyball isn’t just a book or a movie, but rather some sort of mini-series. The Raiders still suck (and ESPN informed their sports reporters this year to stop using the word “sucks”), but is now getting worked without the mystique and élan that characterized its losing in the first decade of the new century (I think ESPN can still use “élan” though).

Perhaps the biggest thing to wrap our heads around is around Cal sports, which has long had the comfort of accepting mediocrity as part of the price of having to admit a linebacking crew made up only of Regent’s Scholars, entomologists, and lit majors. Cal always had the comfort of knowing that while a 3-8 football team made up of such jocks might not be All Americans on the field of play, they would excel once they left the gridiron and become the masters of industry and academia, powerful enough to lay off graduates from the rest of the Pac 12 in the years ahead, inspiring the sassy cheerleaders to boast, That’s all right/That’s okay, You’re going to work for us someday! (But still it must have been maddening to get to do performance reviews of employees who graduated from Arizona State, who while still under your benevolent rule, could taunt you annually about homecoming beat-downs from days gone by.)

So the lesson Cal took out of this was, maybe this scholar-athlete thing had gone too far. Maybe we don’t have to really, y’know, push the scholar thing. What followed was a decade of low-end bowl dates, each generating less enthusiasm than the one before, each with a lower profile, each drawing fewer fans and interest. (The Holiday Bowl! The Insight Bowl! The Armed Services Bowl, The Poinsettia Bowl!) These are bowls to wrap presents by or to get dressed to go out for holiday parties to, or for when you can’t find the remote and this channel is the last thing that was on earlier in the day. Any high school recruit watching the Copper Bowl during Christmas break was either on time-out or house arrest. Cal, having “relaxed” the notion of accepting actual academically eligible students, then decided that maybe really good athletes were unnecessary as well.

In 2013, Cal fielded a team that brought this philosophy to its natural, logical conclusion. The football team couldn’t win or graduate. Among the 72 football teams in the NCAA pantheon of major college programs, Cal had the worst graduation rate of them all. And with a 1-10 record, the worst football team as well. The food is terrible. And such small portions!

But such misery needs company, and the Cal yin has, for decades, relied on the Stanford yang to sing the dirge as one: “But we can’t be expected to win football games when we have to wait-list a cornerback who tried to apply with a measly 3.8 GPA.” Except Stanford started to win. And then continued to win. They win now to a degree that their coaches move on to the NFL and then they win there, too. Stanford wins enough that they get to play Notre Dame. They win enough now that their alumni can buy tickets to fly to Pasadena for New Year’s Day to go to the Rose Bowl football championship in advance and get good fares, which they don’t need, because they are already wealthy, but they can because they know they’re going back there to play that day well in advance, on network TV in front of the whole nation. And win that game, too. They don’t even do the Disneyland thing when they’re down in LA, because they get to go now very often and are bored with it! (Cal last went to the Rose Bowl in 1959, when there were still “E” tickets at Disneyland.) (Cal last won the Rose Bowl in 1938, when there was no Disneyland.)

So, as they say in sports, you can throw out the record book. Cal not only isn’t in shape to play in the Chick-fil-A Bowl, they are going to need a few years of intensive tutoring help to compete for a spot on Wheel of Fortune.

To return to the home of the A’s, 2013 wasn’t just about getting a bird’s-eye view of Bartolo Colón (whom a dim-sighted bird might have seen lose a ground ball somewhere between his feet after it bounced off his belly midseason), it was a year that challenged Oakland’s other senses. Twice during the year, the ol’ ballyard had to be cleaned and sterilized after the ol’ pipes weren’t up the challenge of people actually using the facilities. A quick tour of Wikipedia summarizes the state of affairs with three simple subheads when describing the Coliseum. 1) Mount Davis 2) Tarps 3) Sewage. Talk about an interactive fan experience; anybody can go down a corporate slide at San Francisco’s AT&T Park, with the certitude that what goes up, must come down. Imagine their envy of A’s fans, whose very flush of a toilet carries with it a slot machine’s uncertainty as to the results.

The 510 has a few things that one can count on in the year ahead: Dollar Day at Golden Gate Fields will draw more fans than the rest of the week put together, and the De La Salle High School football team will be better disciplined and throw fewer tantrums than the Oakland Raiders. The Warriors are going to start being a powerhouse at about the same time they get to move to their new home in San Francisco, the A’s will contend and the Tigers will somehow be involved in whether we move on, and if the plumbing doesn’t improve underneath the Coliseum, there will be a lot more fans wanting to get seats in the third deck come playoff time.