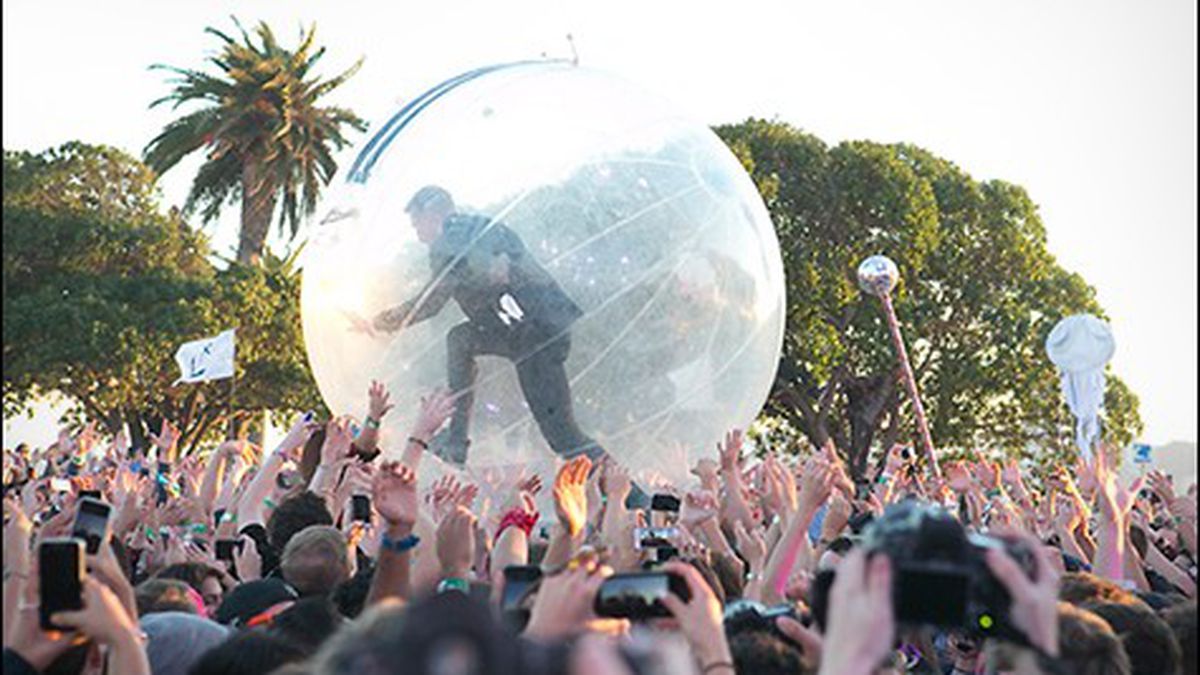 The Year of the Music Festival

The public's appetite for multi-concept music festivals shows no signs of diminishing.

Music festivals have been happening since long before half-naked hippies twirled in the grass at Woodstock, yet multi-band all-day affairs are more popular today than ever before. An article last year in Rolling Stone noted that festivals now dominate the music industry, with events expanding and selling out faster than usual. Locally, both the Treasure Island Music Festival and Outside Lands had record years, said Allen Scott, executive vice president of Berkeley-based Another Planet Entertainment. Indeed, the global concert industry, in general, is on pace to break gross sales records this year, with the top fifty tours selling $1.85 billion in tickets, according to the 2013 mid-year report from concert industry publication Pollstar.

Today, there are festivals for every taste imaginable — musically and otherwise. After all, it’s no longer just about the bands onstage. Nowadays, festivalgoers can expect gourmet food and wine, arts and crafts, live art demos, circus performers, clothing boutiques, and stand-up comedy as well. At this year’s Treasure Island Music Festival, you could even get a haircut. In fact, it’s now entirely possible to attend a music festival and not actually watch any of the music.

Festivals appear to be more about the experience than anything else. “There’s something magical about seeing an artist with 60, 70,000 other people,” said Scott. “It’s hard to replicate. Also, the whole social experience … you have all these individual moments that doesn’t have to do with the artist on the stage.”

On that note, organizers are always looking to offer something unique. At this year’s free Chipotle Cultivate Festival in Golden Gate Park, attendees could watch celebrity chefs prepare meals at on-site kitchens in between performances by bands like The Walkmen and Mayer Hawthorne. Curators of the traveling Station to Station, which concluded in Oakland, aimed to create an “immersive” art and music experience, with installations and film screenings. There were festivals that tried to be many things to many people (Outside Lands) and those that sought to capitalize on niche scenes (The Bicycle Music Festival). There were even festivals for people who love Guinness and oysters (Guinness Oyster and Music Festival), for those into Bret Michaels and wine (Grapes of Rock Festival), and for those who like indie rock and craft beer (The Bay Brewed).

“People are trying to do fun, different experiences,” said Jocelyn Kane, executive director of the San Francisco Entertainment Commission. “There are a million entertainment options for people, and everyone’s trying to be more noisy than the next — in the PR sense.”

The East Bay — and Oakland in particular — also established itself as a bona fide destination for festivals this year, largely in response to the area’s increasing cachet as an arts haven. Besides the aforementioned Station to Station, the city also hosted, for the first time, Burger Records’ annual showcase, Burger Boogaloo, which relocated from San Francisco to Oakland’s Mosswood Park. Total Trash Fest held shows on both sides of the bay, and two new events — the Oakland Music Festival and Oaktown Music Festival — debuted this year to specifically highlight local talent, joining Mission Creek Oakland (which hosts shows throughout the month of September). While the Oakland Music Festival, which was held in the Uptown district, suffered from poor turnout largely because of rain, the demand for locally focused events doesn’t appear to be lacking.

“The response was so unanimous that people seemed to want something like this — it was kind of shocking,” said Sara Sexton of the similarly named but separate Oaktown Music Festival, which she co-hosted, along with Cortt Dunlap, at Awaken Café. The event consisted of a battle-of-the-bands-style online contest and culminated in a weekend’s worth of performances by local acts in November. (Full disclosure: My band was nominated for an award, but didn’t win.) Sexton said that about 150 people showed up for each of the event’s two nights, giving the cafe its biggest sales ever. The organizers plan to hold another event next year, and are already plotting ways to expand it — including, possibly, holding it in a larger venue and over more days. Alfonso Dominguez, who co-founded the Oakland Music Festival, said he’s also plotting another event next year.

So what’s driving the popularity of music festivals these days? Kane believes there are several factors at play. For organizers, festivals are, quite simply, a way to get bodies in seats. “Unless you’re The Rolling Stones, no one can sell 20,000 tickets,” she said. “You have to then bunch all these bands together.”

The ballooning interest in electronic dance music has also helped drive festival ticket sales. Although San Francisco’s LovEvolution was cancelled last year, plenty of other events — such as Sensation: The Ocean of White, which was held in September at the Oracle Arena, and the upcoming Snowglobe in South Lake Tahoe — fill the void. An entire day of the two-day Treasure Island Festival is devoted to electronic and dance-oriented artists.

Meanwhile, the proliferation of mobile food trucks and pop-up shops has made it possible to increase these kinds of offerings, said Kane. Even brick-and-mortar venue owners are taking cues from festival producers by combining elements of food, art, and shopping into their bookings. For example, Public Works recently held The Bay Brewed, a rock-and-beer fest organized by local music site The Bay Bridged. “You don’t go to a museum to see art anymore,” said Kane. “You can go to a club.”

For cities, festivals are huge economic drivers. An economic impact report commissioned by Another Planet Entertainment in 2011 found that its annual Outside Lands festival employed more than 4,000 people and contributed more than $60 million annually to San Francisco’s economy. This year’s event generated more than $2.2 million in fees for the city’s recreation and parks department — an increase of $500,000 from the year prior — and drew more than 200,000 attendees, according to Scott of Another Planet Entertainment.

Not all organizers can afford to pay those kinds of fees, however, so many seek permits to hold events in unusual places, said Kane. “There was definitely more events in parking lots than I’ve ever seen,” she said.

In some cases, organizers have been forced to look outside of urban areas. Kane said that was the reason why promoter Goldenvoice ultimately chose Monterey for the location of its new First City Festival this year. “They looked and looked for something in the city,” she said. (Goldenvoice did not respond to a request for comment.) That two-day festival boasted big-name headliners like Passion Pit, MGMT, and Modest Mouse.

For fans, festivals offer the opportunity to see many acts in one setting, including new acts they may have never heard of and “bucket-list” artists who people might not otherwise get a chance to see — and at a reasonable price. Whereas a ticket for The Rolling Stones might cost $500, you can spend a fraction of that amount to see a big headliner — plus seventy other bands. “The bang for your buck is really good,” said Scott.

Bands get exposure to more fans than they’d otherwise get to play for — and often get paid better than at brick-and-mortar venues, too, said Scott. Bay Area festivals such as Noise Pop, Art & Soul, and Outside Lands make concerted efforts to feature local talent, and small festivals like Mission Creek provide up-and-coming acts a platform as well.

The question is: If fans continue to expect festivals to get bigger and more ambitious, can the market sustain the trend? Scott believes we’ll hit a saturation point soon. He also noted that of the four other big festivals that started the same year Outside Lands did, in 2008, only Outside Lands survived. He said the key is to grow your event without sacrificing audience experience, which is why Another Planet consciously chose not to expand to the festival to 225,000 attendees — even though the parks department gave organizers the green light to do so.

Now that the country is beginning to emerge from the recession, festival producers — not to mention ticket startups such as Ticketfly, Eventbrite, WillCall, and TicketWeb — are eager to capitalize on the rebound. In fact, Another Planet just launched a new annual festival in Las Vegas in October called Life is Beautiful. And the possibility of a festival in the East Bay? He didn’t rule it out.

“None of [the festivals] get smaller,” said Kane. “They all get bigger — unless they go away.”