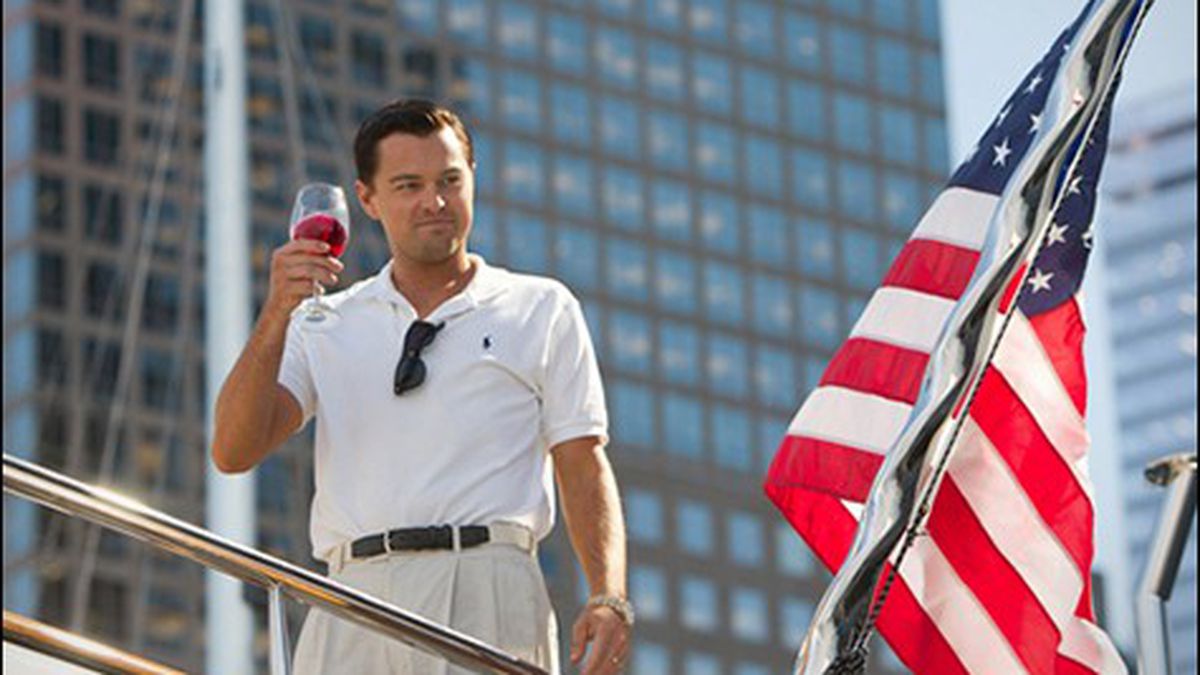 The Wolf of Wall Street

Not by the hair of your chinny-chin-chin.

A great director is entitled to make a dud once in awhile. Charlie Chaplin did it with A Countess from Hong Kong. For John Ford, it was 7 Women. And Terrence Malick’s latest, To the Wonder, had serious writing problems to go along with its narrative sketchiness.

But those “gaffes of the masters” at least bore a certain cohesiveness with the filmmaker’s body of work, and arguably advanced the themes and aspirations of the director along the lines of his more successful efforts. Such is not the case with The Wolf of Wall Street, the weakest movie in Martin Scorsese’s fifty-year career. It checks into multiplexes this holiday week as a horrible mistake dressed up in juvenile gross-out drag — the worst writing Scorsese has ever been associated with.

Some stories are just too stupid to care about. The Wolf of Wall Street is based on a book by Jordan Belfort, a convicted stock-fraud swindler and “motivational speaker” from Queens, New York whose “pump-and-dump” exploits in the penny-stock markets of the 1990s were punctuated by an almost comical display of crassness — “almost” is the crucial descriptor here — involving booze, cocaine and other drugs, swarms of prostitutes, sales pep rallies straight out of Get Him to the Greek, and that old favorite, Other People’s Money. He liked to boast that he was selling garbage stocks to garbage men. Belfort is played by Leonardo DiCaprio, who earlier this year portrayed F. Scott Fitzgerald’s ostentatious Roaring Twenties millionaire in The Great Gatsby. Compared to that role, DiCaprio’s Belfort is a loud-mouthed slob imitating what he thinks rock stars do when they strike it rich, and Scorsese (alongside screenwriter Terence Winter) buys into it wholesale as a portrait of its times. Presenting The Great Cracksby, ripped from the pages of The Wall Street Urinal.

Gouging his way up from the bottom of the food chain, disgraced ex-brand-name trader Belfort encounters the usual colorful role models and sympathetic souls. One stockbroker, played by whirlwind Matthew McConaughey, is fond of beating his chest and wheezing a Tarzan yell in crowded restaurants, to show his bravery. Belfort’s right-hand man, a corpulent man-child named Donnie Azoff (Jonah Hill, up to his old tricks), is married to his own first cousin. Patrick Denham (Kyle Chandler), the FBI man on their tails, cannot be bought off with yachts and strumpets. But Swiss banker Jean-Jacques Saurel (Jean Dujardin from The Artist, well cast) surely can. Belfort’s trophy wife Naomi (Australian starlet Margot Robbie) is a Brooklyn sex bomb. Her Aunt Emma (Joanna Lumley) aids Belfort’s money laundering efforts from London. The rhythm is exactly the same as in Scorsese’s landmark gangster movies, only dumbed down a notch. Goodfellas with nerds. A clowns’ Casino. Brokerage as frat house. The Bowery Boys Wreck the Stock Market.

We detect a pattern here. Scorsese throws himself into Belfort’s follies with abandon, but he’s coming to the party late and it shows. The insane marching-band-with-bimbos production number bears a suspicious resemblance to Charles Foster Kane’s comparatively sedate newsroom celebration in Citizen Kane. Opening as it does one week after American Hustle — David O. Russell’s tribute to/imitation of Goodfellas and Casino — Wolf occupies a strange position. Russell’s knockoff of vintage Scorsese is tighter and funnier than Scorsese’s own imitation of his former glories. Wolf is a penny-stock version of itself, combining Scorsese’s most dubious late-period excesses in one near-unwatchable bundle.

Despite all the plundering and partying, the movie is fairly bald on plot incident. There are several witty moments, but individual sequences run on far too long, such as the one in which Belfort laboriously crawls, wriggles, and worms his way out of the country club to his car one night under the weight of too many Quaaludes. Did someone actually write this? Saw the same gag in each of the Hangover flicks.

More to the point, is Scorsese running out of ideas? If it could happen to Orson Welles, it could happen to him. He should double whatever fee he’s paying to his longtime film editor Thelma Schoonmaker. Without her cutting this mess would run four hours instead of its bloated 165 minutes. If there’s a saving grace for this superbad time-waster, it’s in little stabs of happiness such as the one in which writer Fran Lebowitz takes a cameo shot as a judge. Scorsese should have hired her as a script doctor and chopped thirty minutes — no, make that an hour — of nose candy and prostitutes out of the film. That would at least be a start.

From Frisco 5 to Frisco 500: Equipto’s Hunger Strike Is Galvanizing...