In recent months, Catholic school employees throughout the East Bay have increasingly expressed concerns about a new clause in the Oakland Diocese’s 2014-15 teacher contract that dictates expectations for their behavior in their personal lives. As I noted in our print story this week on the new “morals” code, I’ve heard from numerous individuals worried about this policy change since Bishop Michael Barber first unveiled the rewritten contract in March. It appears, however, that the backlash is not limited to a small group of critics within the diocese: Today, Assemblymember Nancy Skinner is staging a protest and press conference, featuring eight speakers condemning the contract language.

Here’s the new statement under the “duties” section of the teacher contract that has caused the uproar:

Employee acknowledges that the school operates within the philosophy of Catholic education and retains the right to employ individuals who demonstrate an ability to serve in accordance with that philosophy. In both the employee’s personal and professional life, the employee is expected to model and promote behavior in conformity with the teaching of the Roman Catholic faith in matters of faith and morals, and to do nothing that tends to bring discredit to the school or to the Diocese of Oakland.

The 2014-15 contract also includes an entirely new “philosophy” section, which states that employees must agree to perform all responsibilities with an overarching commitment to the doctrines, laws, and norms of the Roman Catholic Church. 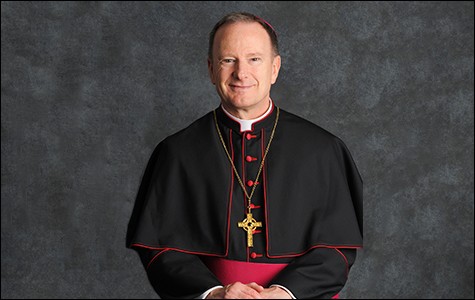 The language, which Skinner’s office labeled a “‘Hateful’ Morality Clause” in its press release this morning, has raised concerns about whether church officials or administrators could use the policy to target LGBT teachers or non-Catholic employees. It could be especially problematic in the liberal East Bay, which is home to progressive Catholic groups and institutions.

Here’s the list of speakers from Skinner’s office, speaking out at a protest today at the Elihu Harris State Building:

“It’s unacceptable that at a time when our new Pope Frances embraces wider inclusion, raising the question ‘Who am I to judge a gay person?’ that the Oakland Diocese would embrace hate and rejection,” Skinner said in a statement. “Oakland Bishop Michael Barber needs to put a stop to these inquisition-style tactics now.” In the press release, her office said that the clause has “created a firestorm, raising fears that teachers could be fired for being gay, for having pre-marital sex, or for using birth control.”

The protest comes on the heels of a front-page Chronicle story out today, which noted that, though the contracts were officially due last week, some “sympathetic school administrators” gave teachers until today to sign.

As I noted in my story earlier this week, Diocese of Oakland spokesperson Mike Brown responded to the criticisms by arguing that this is “not a witch-hunt” and that the new contract simply underscores the “importance of teaching and abiding by Catholic principles,” which he said was outlined in past contracts. The 2013-14 contract, however, had no “philosophy” statement, no reference to an employee’s behavior in his or her personal life, and no mention of “matters of faith and morals” pertaining to expected behavior. Regarding concerns from LGBT Catholics, Brown said the goal was not to specify “some list of behaviors” or establish “prohibited activities.”

Brown told me last week that he was unaware of any teachers who had refused to sign the contract over the new clause, but the Chronicle reported that, according to teachers at Bishop O’Dowd High School, it appeared some educators won’t agree to the new language — which means they likely won’t be coming back next year.

For more on the contract controversy, check out Teachers Forced to Sign New Personal ‘Morals’ Code.