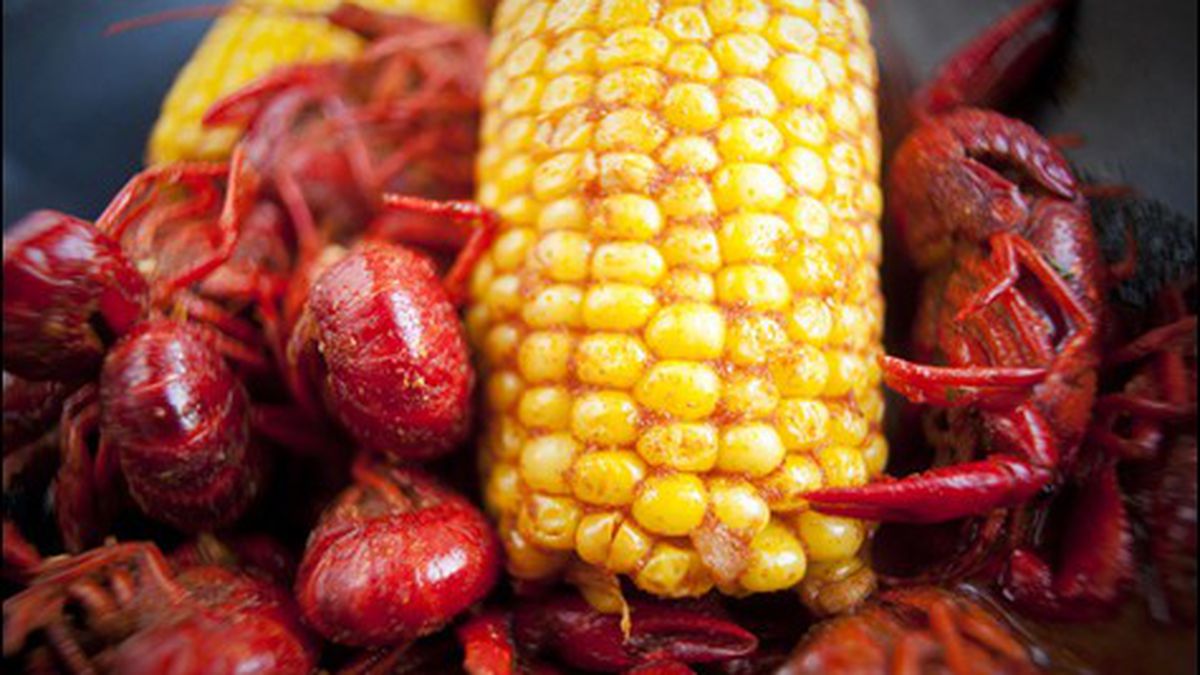 A uniquely Vietnamese-American style of restaurant comes to Oakland.

Sharing space with the Wash House Laundromat, the Rockin’ Crawfish resides in a squat, L-shaped building that resembles the severed tail of a mini-mall. A glowing sign shows the restaurant’s cartoon namesake, a guitar-shredding crustacean with an appetite for his own consumption. It looks like a travel plaza chain in some dowdy Midwestern town.

Inside, the Rockin’ Crawfish looks like a Millennial’s brightly lit update on a Hard Rock Cafe. Instead of Buddy Holly and The Shirelles, records from Def Leppard and Erasure line the back wall. A dusty, forlorn Atari perches next to a vintage radio, sure to make the Asteroids generation feel ancient. Radio pop sets a bubblegum mood. A wall-mounted, signed (“No one famous,” a server assures me) electric guitar looks passably similar to the one used by the cartoon crawfish.

But don’t be fooled: This place is more than a kitsch factory with a seafood menu. The Rockin’ Crawfish is East Oakland’s first introduction to a peculiar, only-in-America culinary phenomenon. It started on the Gulf Coast of Louisiana and Texas, where a generation of Vietnamese immigrants settled after the war. The community of ex-pats found something hearteningly similar between the Cajun crawdad boil and their own seafood feasts back home.

About seven years ago, the “Asian Cajun” phenomenon moved west, when a Vietnamese couple from Arlington, Texas, opened the Boiling Crab restaurant in Orange County’s Little Saigon. Within weeks, the nautical-themed seafood shack was wildly popular, and a crop of SoCal competitors soon sprouted up. One of these, a Westminster spot called the Rockin’ Crawfish, opened a second branch in Oakland last year.

“This is the first uniquely Vietnamese-American style of restaurant,” Vietnamese food writer Andrea Nguyen told me. “It’s not pho and it’s not banh mi. The new generation has created something all their own.”

Which is, what exactly? A loud, audacious restaurant, where Asian twentysomethings congregate over cheap beer and seafood by-the-pound. Each one typically bears a goofy theme (Nguyen asked me of the Rockin’ Crawfish: “Is that the pirate one?”) and formality is frowned upon. Instead of utensils and dishes, you’re given bibs, paper towels, and disposable trays; at meal’s end, servers wrap everything in a paper tablecloth and trash the whole bundle. Customers are allowed to tag the walls with Sharpies, although most keep it remarkably PG-13: “Mark Yanga is Nice!”

The Rockin’ Crawfish menu is short. For appetizers, there are deep-fried oysters, zucchini, and calamari, as well as Cajun chili fries (greasy boardwalk fare, best for soaking up alcohol). Non-beer beverages include an achingly sweet peach green tea, root beer floats, and a roster of saketinis. You can also get boiled potatoes, corn on the cob, and little nubbins of generic, barely Cajun sausage. But the main attraction is obviously the boiled shellfish, served shell-on with a combination of butter sauce and fiery Cajun spice.

Front and center is the restaurant’s namesake, served whole in an angry shade of scarlet. For the uninitiated, crawfish can frustrate; like pistachios or baby back ribs, there’s mucho work for a tiny payoff. Even the most efficient (and sexy) method, popping off the head and sucking meat out of the tail, requires some investment from the eater. Though I occasionally lost patience, Nguyen points out a cultural precedent to the chore. “Vietnamese people have always loved to pick at seafood with their hands,” she said. “There’s no hurry to fill up; the meal is a social event that can last for hours.”

The crawfish, like crab, shrimp, oysters, and clams, is served in one of three sauces, at spice levels ranging from mild to volcano. The considerable heat is achieved by boiling everything in a salty slurry of fresh and powdered habanero pepper, as well as an unsubtle Cajun spice blend that would make Emeril blush. The oily sauces are lemon pepper, garlic butter, or the “Rockin’ Combo,” a blend of the two. You can also layer on flavor with limes and black pepper, a Vietnamese throwback.

All seafood is served in a juicy plastic bag, which you dump into a disposable black tub for consumption. If you order sides, they’re in there, too; hopefully you like your corn as spicy as your clams. Skip the king crab legs and shrimp; they’re brought in frozen (I found out too late), and the crawfish are a hoot but won’t fill you up. Your best bet is a whole Dungeness crab, built to share. Bib up, son: It’s going to get messy.

As you release the meat using hefty metal crackers, you’ll have the option to dunk each nugget in the sauce below. I favored the garlic butter, as the lemon pepper had a mildly artificial tang, but you can also eat the sweet crabmeat straight-up. I strongly suggest ordering a side of steamed rice for your grand finale. Spoon the rich, yellow-green “crab butter” (Google it if you’re unfamiliar) onto the rice, then mix in some spicy sauce from the bottom of the tub. The rich, liver-like custard is well-met with the garlicky fire, and the sticky white rice sops up the aftermath. Like the oyster on a chicken, crab butter is a tiny treasure, all the more valuable for its scarcity.

Budget enough time for a full experience at the Rockin’ Crawfish. The boiled seafood is fresh but not mind-blowing; the restaurant’s draw is largely social. Open until 11 p.m., it’s a chance to sit around and create carnage with your friends, make a huge mess, and scribble on the walls. You’ll get red sauce under your cuticles, and you’ll probably drink too much beer. The experience is brought to you from Vietnam, via Texas, with a pit stop in Orange County. It’s all very … American.