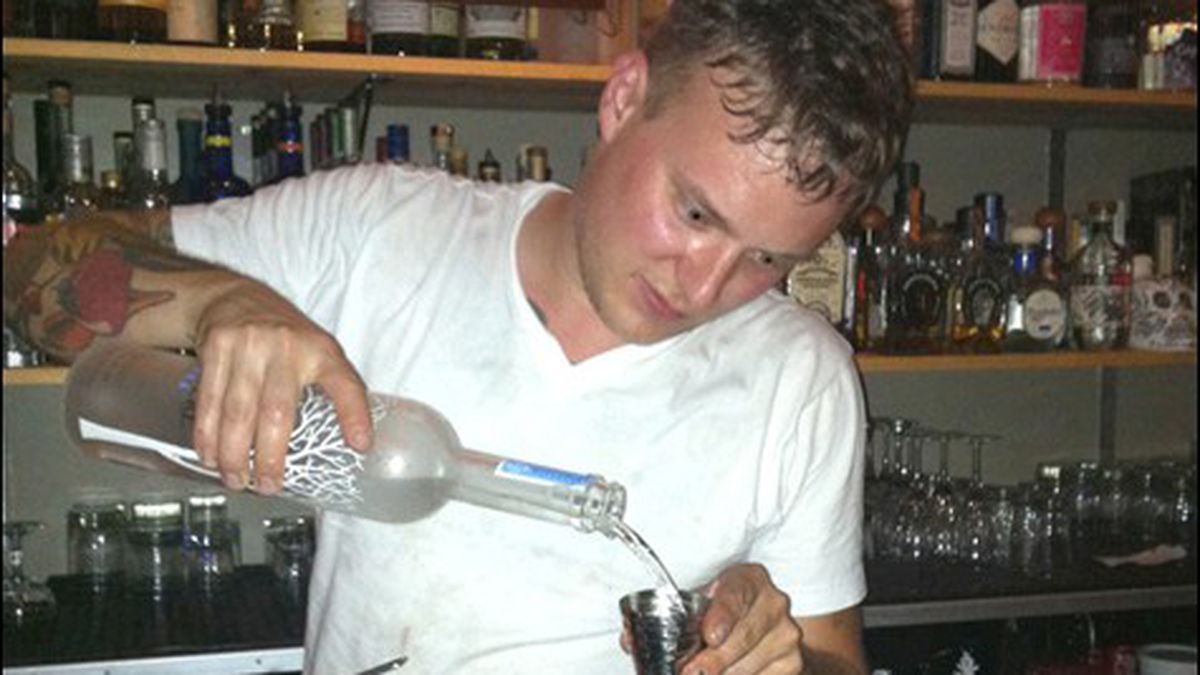 The vampire was thoroughly — if laboriously — enjoying her drink. Sandwiched between Mario (sans Luigi) and a bunny rabbit at the gorgeous dark-wood bar at West Berkeley’s Acme, she tried ingesting her teacup-size portion of punch at various different angles, but the problem with fangs is that they can get a bit unwieldy when you’re not actually sucking blood. (She ultimately went for the easiest route, which was to take out the teeth altogether.)

All around her, mustaches both real and fake filled the room like a hundred ironic frowny faces. A man dressed as either a doctor or a chef — big white jacket but no other accessories; hard to tell — drank from a myrtle-green glass that I would later discover was the tail end of an Evil Queen (heh): Hudson Rye, green chartreuse, and an apple gastrique, served up with a caramel apple. Some crappy horror-lite flick from the Nineties played on the TV in the corner, and Acme’s well-loved jukebox had been put out of commission for the evening in favor of a hand-curated, mostly Halloween-centric playlist: “Thriller,” the Pixies, a few scattered soul covers. Sailors and cats and zombies squished up against each other in the narrow space, and behind the bar, Morgan Schick (sweaty, smiley) and Eric Quilty (fastidious, clad in black), moved very, very fast.

This was all their idea, and it was the latest, Halloween-themed installment of Jupiter Olympus Presents, the pop-up bar series the two bartenders have been holding around the East Bay since August. As the “Presents” implies, it’s part of a broader enterprise, Jupiter Olympus (slogan: “Imbibio Gratia Imbibio” — translated roughly from Latin: “to drink for the sake of drinking”), headed by Schick and Quilty, which is intended to eventually expand into a full-service catering company, bar-and-restaurant consultancy, and private bartending school. But right now, Schick and Quilty have been focusing on the pop-ups. Their inaugural event, held at the end of August, also at Acme, introduced three new gins from Alameda’s St. George Spirits with the help of hand-carved ice, grilled peaches, house-made carrot soda, and various other schmancy and obscure ingredients. Next up is a New Year’s Eve party whose details are still fuzzy but which Schick promises will be pretty epic.

The impetus for all this, Schick said, was, “in part, to give ourselves a forum to play with ideas that aren’t necessarily viable in a seven-day-a-week-bar setting” — most of the time, he and Quilty work at high-end, fairly buttoned-up restaurants (San Francisco’s NOPA and Piedmont’s Adesso, respectively). So in that sense, Jupiter Olympus and events like it can do for bartenders what food trucks and pop-up restaurants do for young chefs and aspiring restaurateurs: they provide a relatively safe, low-risk space for experimentation-oriented mixologists to play with new techniques; to use small-batch ingredients and labor-intensive preparations to create cocktails that would be hard to put on a typical bar menu; to mess around with dry ice and celery bitters and cinnamon tinctures just because it’s fun; and to mix candy corn, whiskey, aquavit, and sage in the same gourd-orange concoction. (They’re apparently a boon for the host bars, too, according to Acme’s Jennifer Seidman, as novelty events and as-yet-untapped fanbases bring in new customers).

At the same time, according to Schick, he and Quilty want to “sort of prove to both ourselves and others that there’s a market for this stuff in the East Bay — that you don’t need to go to San Francisco for a well-made cocktail, and that cocktail culture doesn’t need to be this intimidating thing where it’s served in these sort of temple bars.” At Jupiter Olympus, there’s no passwords, no hushed silence, no weird vocabulary — just Michael Jackson on the sound system and grown men dressed as video game characters. Sounds like a good trade to me.

As for the drinks: said gourd-orange concoction was one of the more unappetizing-on-paper liquids I’ve ever consumed, but turned out to be insanely tasty. The sage acted less as a front-and-center flavoring and more as a subtly herbal aroma and aftertaste; the candy corn, was, thank God, implied more than anything else, melted down in the place of sugar; and the whiskey was, um, copious. Which is always good. But even if it had been moderately or even not at all tasty, Schick and Quilty could’ve just disregarded it as a noble experiment and never discussed it again. That’s the beauty of it — it’s exciting because it’s fleeting, a chance for computer programmers to be vampires for a night and for typically straight-laced mixologists to be mad scientists. In short: lots and lots of mustache-frowns, but underneath them real smiles.

Facebook
Twitter
Linkedin
Previous articleOakland Police to Jean Quan: Can’t We Take the Day Off, Too?
Next articleOngoing Coverage of the General Strike All Day Today
18,644FansLike
0FollowersFollow
67,429FollowersFollow