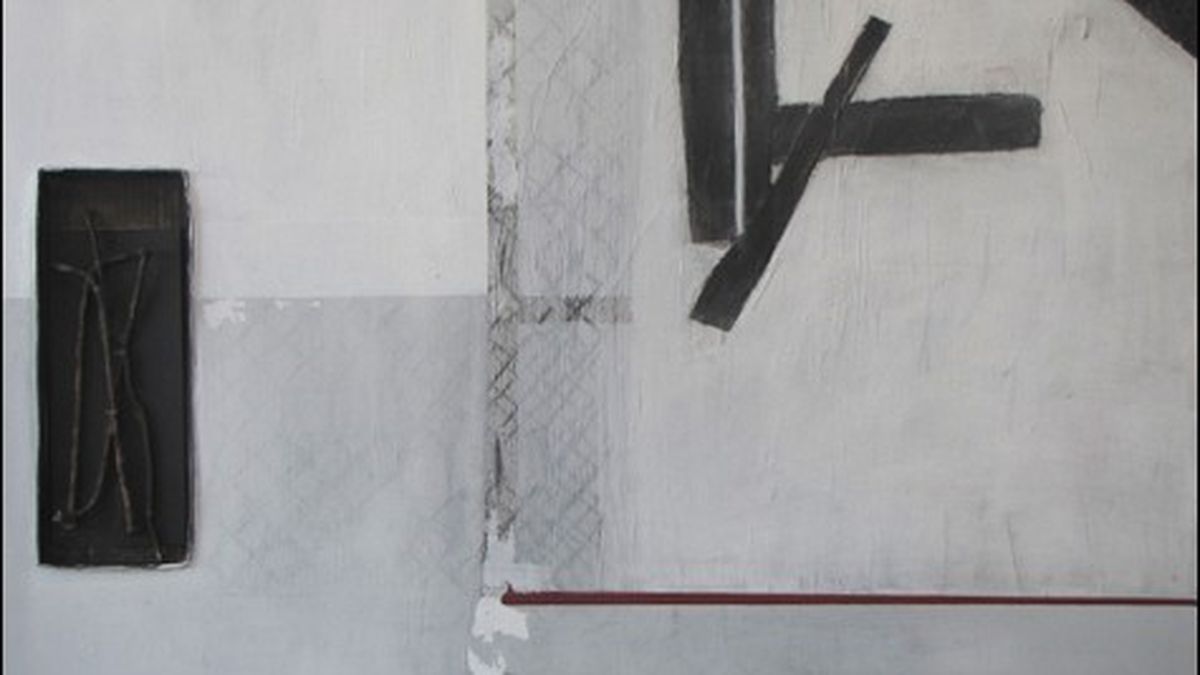 Lest this start sounding triumphalist, it should be noted that Eric Bohr’s Mercury 21 painting assemblages and Charlie Milgrim’s sculptures and installations are adamantly green in their sentiments. In these abstract/conceptual works, Constructivism’s utopian geometry gets deconstructed, or at least weathered (like the paintings Munch left outdoors for seasoning), reflecting our current war against oil in the Gulf of Mexico.

In the Catholic religious calendar, Ember Days are three days set aside seasonally for fasting, prayer, and reflection on our relationship to nature’s cycles. Bohr’s abstract paintings, with their subdued, wintry palettes, and their creative reuse of salvaged industrial materials, are, despite their beauty, somber reminders of Rust Belt decay and decrepitude (he’s from Michigan) and of our ecological short-sightedness. The crossed black beams, fenceposts, or train cars set against scumbled red backgrounds in “Rail” and “2 Sticks” denote danger and collapse, while the ethereal “Ember Days” reads almost as an erased drawing, or a Cubist/Dada collage enveloped in Turneresque fog. Bohr has also shot a video of the landscape rolling past a train window that is curiously compelling: See the USA!

Milgrim abandons her trademark bowling balls (well, almost) with Spiral Jetsam, a suite of sculptures and installations deriving from and commenting on Robert Smithson‘s famous 1970 earthwork, “Spiral Jetty.” The spiral is a cosmic symbol recurrent in nature; Smithson’s trademark piece, made from boulders in a part of the Great Salt Lake where the water runs from bacterial blooms, is now discolored and sometimes submerged. It’s also, ironically, the subject of dispute these days between art mavens (who ignore Smithson’s interest in entropic decay) and oil interests (drill, baby, drill!). Milgrim has also been thinking about the Texas-sized Sargasso Seas of plastic jetsam floating in two oceans. Her spiral-shaped wall and floor pieces comprise Styrofoam computer packaging blocks, fallen like dominoes; tossed cell phones; CDs; and floating “pool noodles” (the stuff that floats lane markers, presumably). A painting/photo hybrid superimposes her Spiral Jetsam installation onto an image of Michael Heizer‘s vanished 1969 earthwork, “Munich Depression.” All things must pass — except plastic. Ember Days and Spiral Jetsam run through May 29 (along with works by other gallery artists and bigger, better expanded hours) at Mercury 20 Gallery (471 25th St., Oakland). 510-701-4620 or www.MercuryTwenty.com