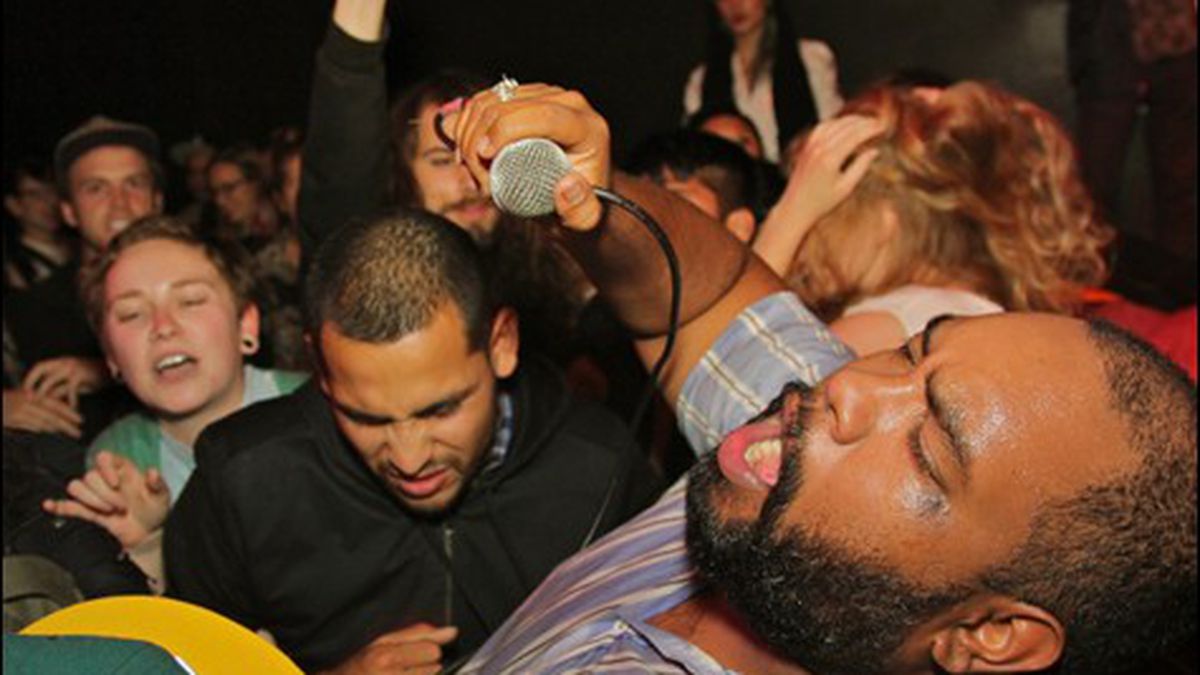 Antwon on the Fringe

The San Jose rapper's outsider ethos may be his ticket to crossover popularity.

It should have been easy to spot Antwon — a stout African American among the crowd of skinny white goths who typically frequent Elbo Room’s monthly party 120 Minutes. “Im in front,” he texted, but wasn’t — he was outside, hiding in the shadows of the adjacent Sycamore Street, smoking a cigarette and drinking a tall boy wrapped in a brown paper bag.

It had been a big week for the 26-year-old San Jose rapper: SPIN named his new album In Dark Denim “Rap Release of the Week” and dramatically proclaimed him “The last truly weird Internet rapper alive.” But Antwon (né Antonio Antwon Williams), who sported a plain vintage button-down shirt, black pants, and a flat-billed cap, wasn’t celebrating with his crew or getting pumped for his headlining set; his shoulders slouched and his eyes were cast on the pavement. He smoked in silence while his best friend and collaborator, Doug Gough (aka DJ Sex Play), stood a few feet away texting. When I asked Antwon about SPIN, he shrugged and said, “Ah, I’m just Internet famous.”

That could change with In Dark Denim, his third full-length and first on Greedhead Music, the label of former Das Racist emcee Himanshu Suri (aka Heems). Hook-laden and lewd, tracks “3rd World Grrl” and “Werk 4 Me” are club-friendly party jams that still maintain Antwon’s deviant and dark edge. In the last six months, he has secured a new manager, publicist, and booking agency. The Elbo Room gig was his last local appearance before this week’s six shows at SXSW, which includes SPIN‘s official showcase.

Like most rappers who come up on the Internet, Antwon’s following skews young. “Hey ‘Twon,” a guy in a hoodie called out as he approached us. “What’s up, man? Can you get my friend past the bouncer? He forgot his ID.” Antwon’s brown eyes scanned their faces, never directly looking at them: “I dunno what you want me to do,” he finally replied. The guy pointed to another group of guys in the distance, asking, “Who does my friend most look like,” and there in the side street, clothes were swapped and driver’s licenses switched. (Couldn’t tell you how this worked, but pretty sure I spotted them in the mosh pit that erupted during Antwon’s set.)

Antwon started rapping at an early age, but said he mostly kept it a secret, spending his early twenties playing bass in a few local punk bands and going to shows at 924 Gilman. He started recording his first demos in 2005 after meeting a girl in San Jose who wrote poetry. It got him thinking about rhythm and language: “I told her, ‘You’re reading it too fast,'” Antwon recalled. While In Dark Denim is mostly concerned with oral sex, “coochies,” and “back doors,'” it’s also oddly romantic and nihilistic, advancing the surrealist themes he laid out on his first mixtape, 2011’s Fantasy Beds, and on 2012’s End of Earth. Present in all of Antwon’s music is a combination of suburban dread and urban fantasy, a dream of moving out of his mom’s house in San Jose but ultimately being too drunk or high to do anything about it.

“The fact that there’s nothing to do in San Jose is good,” said Antwon, who escapes to San Francisco two days a week to work at New Jack City, a Mission District store that sells vintage clothes and hip-hop gear. “I read a lot of books.” Unsurprisingly, The Outsiders is among his favorites.

End of Earth solidified Antwon as a new voice in hip-hop, particularly in the scene that combines punk and hip-hop and includes Sacramento duo Death Grips, who also broke through last year. Antwon’s size and his gruff, booming inflection have earned him constant comparisons to The Notorious B.I.G., but he’s more directly influenced by Depeche Mode, the emo band Cap’n Jazz, Kid Rock, and hardcore-punk outfits like Leather and Trash Talk, with whom he’s shared bills. “I don’t care about hip-hop,” Antwon said, unapologetically. He cut his teeth playing raucous warehouse parties like Sick Sad World at the now-defunct Oakland warehouse venue Rec Center, where he met Heems; his show at 924 Gilman late last year with Main Attrakionz represented, in many ways, Antwon’s worlds finally coming together.

IN DARK DENIM by ANTWON

If the crowd at Elbo Room — black leather-clad goths, punks in spiked collars, longhaired suburban skateboarders, women in basketball jerseys and fishnets, liberal-arts-educated hipsters — was any indication, Antwon’s misfit persona is what unites the wide spectrum of today’s hip-hop fans. 120 Minutes’ resident DJs warmed up the crowd with a remix of Grimes’ “Oblivion” and bass-heavy tracks by goth-tinged producers like Pictureplane, who provided the beat for one of Antwon’s best tracks to date, “Living Every Dream.” Around midnight, Antwon walked onto the bare stage with a mic in his hand, closing his eyes as Gough cued a track and a fog machine coughed behind them. He opened his eyes as he broke into “3rd World Grrl,” pacing around the stage and devouring the mic, which was tilted upside down and almost inside his mouth. A pit quickly formed and passed beer cans up to Antwon, until midway through the set when the moshing and crowdsurfing hit its peak, sending beer cans flying through the air. Antwon stayed focused, sweating intensely through his seven-track set, barely acknowledging a frizzy-haired metalhead who jumped onstage to scream during the last song.

Antown’s raw, DIY aesthetic — a huge part of his appeal — has ironically been one of the main criticisms lobbed at In Dark Denim: Some tracks sound rushed, lyrically and production-wise, and its mix of retro Nineties beats, cloud rap, aggressive digital hardcore, and hints of trap makes the album a bit disjointed. Antwon said he pulls his beats from anyone and everywhere, but works alone, recording at Gough’s home studio in San Jose. If he likes a beat, he quickly starts piecing together a track, almost always improvisationally and in intense sessions during which he works obsessively toward completing a mixtape. “You can’t overthink it, you know,” Antwon said of his process.

The struggle to shift from the hyperactive, genre-spastic realm of Internet rap and into a more polished and defined style has plagued many artists, including Berkeley native Lil B, the OG weird Internet rapper, about whom Antwon recently tweeted: “I owe @LILBTHEBASEDGOD everything thank you for being positive in a cold world.” Lil B has yet to catapult his hype into mainstream stardom, but he paved the way for raw, moody, and introspective rappers Odd Future, Kendrick Lamar, and now Antwon. At the height of his career (way back in 2011), Lil B was analyzed by NPR, praised by Pitchfork, and played major festivals like SXSW and Coachella.

After SXSW, Antwon is set to collaborate with goth-folk indie singer Chelsea Wolfe and Ryan Hemsworth, one of the hottest producers at the moment. “My manager wants me to work with all these people,” Antwon paused. “But I don’t fit in with a lot of shit.”