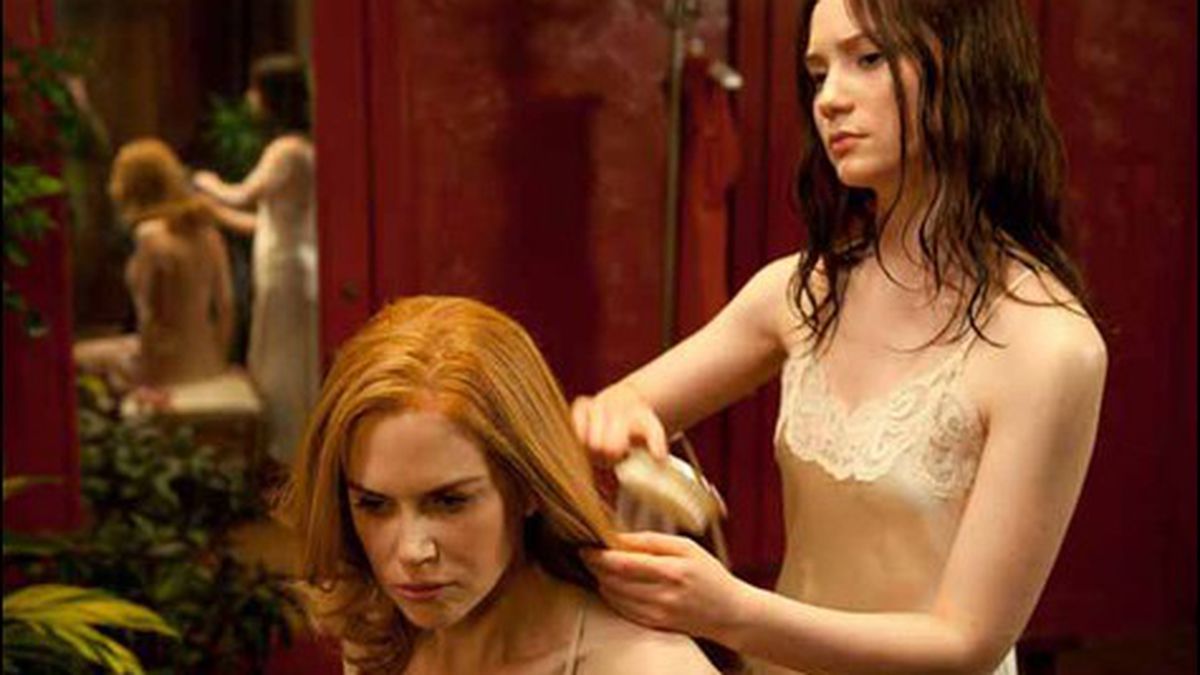 India Stoker: a name to conjure with. In the case of Stoker, the first English-language film by South Korean shockmeister Park Chan-wook, the conjuror himself is every bit as compelling as his subjects and the material they inhabit — a psychological, vaguely soap-operatic, decidedly gothic framework of cruelty and deceit in a mansion in the woods.

Lanky, sober, impressionable India (Mia Wasikowska) is the eighteen-year-old daughter of Evie Stoker (Nicole Kidman), a petty, selfish woman at the head of a family burdened with taxidermy, bourgeois stuffiness, and an inclination to eavesdrop. Since the recent accidental death of her father Richard (Dermot Mulroney, in flashback), India finds herself unloved at home and picked on at school. Into this stifling picture comes Charles Stoker (Matthew Goode), younger brother of India’s late father, who arrives to stay with the mourning family. There’s something wrong with Uncle Charlie but we can’t quite put our finger on it. Maybe it’s his orange bottled tan or the odd innuendos he throws India’s way, like the “not ready to be opened” dinner-table line — is he referring to the wine or to his niece?

As in many melodramas, especially those of Alfred Hitchcock — from whose Shadow of a Doubt screenwriters Wentworth Miller and Erin Cressida Wilson freely help themselves (you can add Psycho as well) — India develops a feverish infatuation with her uncle. Disturbing, violent fantasies come to haunt her even in her waking life, and they worsen as we go deeper into the vortex. Both the acting and the decor are heavily stylized. A certain brittle erotic electricity fills the air. Friends begin to whisper about Charlie and Evie’s closeness so soon after the demise of her husband. India dislikes being touched by her mother, but shows a fondness for firearms. Uncle and niece play a bizarre four-handed piano piece. Evie burns her husband’s possessions. India finds spiders in her clothes. Characters gradually begin disappearing.

Director Park, perhaps the most interesting of South Korea’s bumper crop of visual stylists in the past decade, has a definite knack for setting disturbing scenes, but we suspect he’s on his best behavior for his first Hollywood job. After all, at this stage of his career it just won’t do to have Nicole Kidman spread-eagled in a trap of piano wire. But we can see he’s slowly creeping up on the show-stoppingly grotesque images he created for Thirst and Oldboy. Perhaps as tribute to Hitchcock and in deference to Hollywood, Park eases back on the shock cuts in Stoker and gives the high-priced talent room to work. They’re more important than the plot.

Chung Chung-huan’s cinematography is a marvel to behold. Consistent with Park’s earlier thrillers, Stoker (the name is evidently a conscious nod to Bram S., author of Dracula) is emotionally uninvolving but perversely exciting, as if India and her relatives were a species of deadly insects instinctively circling each other, clicking their mandibles.

Pale and blond for most of her ingénue career, Ms. Wasikowska looks wonderful as a brunette. Her intensity, however, remains unchanged. Ditto Kidman’s prickly matriarch — she’s one of the best female heavies in the business, a glacier of ill-will. English actor Goode, the epitome of a light leading man type (Leap Year, Brideshead Revisited, Match Point), reveals hidden wellsprings of iniquity — he should thank the producers for the chance to let his freak flag fly. Everyone’s favorite skewed old mom, Jacki Weaver, shows up as India’s nosy grandmother, and, as a bonus, professional provocateur Harmony Korine gets a cameo part. We get the impression that Park and Korine admire each others’ twisted tableaux — maybe they’ll team up someday for a remake of Gummo, with an all-Korean cast. But first, keep your eye on the spiders.

Best Toddler Taming Ground: And a place for adults to challenge...

Best Place to Make Out in Public