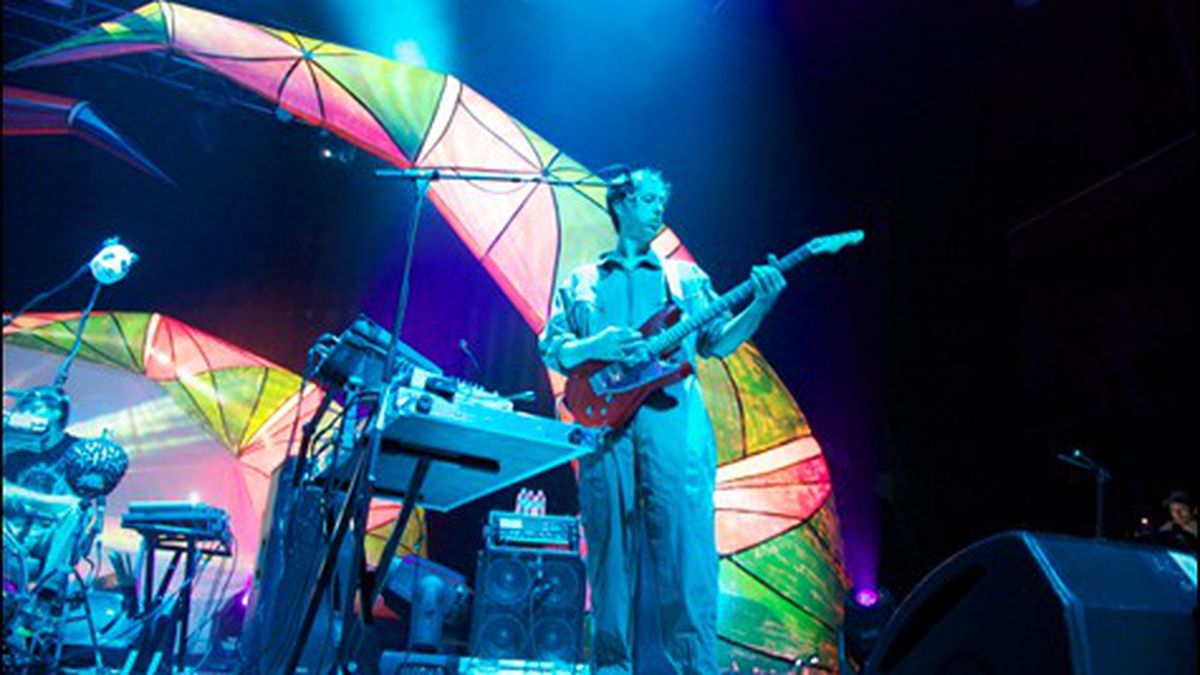 The band's unabashedly weird performance at Fox may have pleased die-hard fans, but it didn't convert the uninitiated.

It was clear that the audience was in for more than just a concert at Fox Theater on Saturday. The stage was set up to resemble a giant cartoon mouth with enormous, inflated scraggly teeth lining the ceiling and the front edge. Behind the area where the band would play were towering, multicolored rugae (the fancy name for the ridges on the roof of your mouth), spiraling back. Where you’d usually expect a larynx, if stages usually had larynxes, there was a human-size projection screen. We were essentially staring into the throat of an enormous cartoon-monster-clown, with a performance about to happen on the tongue.

You would expect no less from Animal Collective, a band that, in a Venn diagram mapping mainstream success versus psychedelic weirdness, would probably have more overlap than any other group around today. This weekend’s show happened weeks after the release of its ninth full-length studio album, Centipede Hz, its first release in three and a half years. Animal Collective had a lot to live up to after the success of 2009’s Merriweather Post Pavilion, the psychedelic pop masterpiece which garnered countless comparisons to Pet Sounds and was declared the best album of the year by publications like Entertainment Weekly, Pitchfork.com and Spin, to name just a few. Rather than compete with Merriweather, Centipede Hz backs away a bit from the pop aesthetic, strives to be less accessible and more abrasive and, so far, has found less favor among critics.

But that didn’t diminish expectations for the band’s Oakland performances. The night started with a forty-minute opening set by Micachu and the Shapes, a UK-based grime-pop band that just released its second album, Never, on Rough Trade Records. Led by 25 year-old Mica Levi, the trio seemed like a natural choice to open for Animal Collective: experimental and hard to define, walking a shaky line between sweet pop and noise-for-noise’s-sake. Compared to the band’s recordings, its live set tipped more toward the grimy side, with the exception of a few instances in which some more melodic instincts shone through. The best moment of its set was the final song, “Golden Phone,” a catchy, garage-pop track off the band’s 2009 debut Jewelry. Micachu played with surprising aplomb, as if oblivious its placement inside a giant mouth. As an observer, it was hard not to get distracted by the demented clown-grin surrounding the bandmembers and wonder what Animal Collective had in store.

The venue filled up quickly as Animal Collective kicked off with a hyped-up rendition of “Also Frightened” from Merriweather Post Pavilion. It was a smart choice to start the set and warm up the crowd, because the tension builds slowly as samples layer on one another. A minute or so in, the giant teeth lit up in multiple colors, the crowd began screaming, and thus began nearly two hours of nonstop sensory overload.

The band continued with three tracks off Centipede Hz: “Applesauce,” “Wide Eyed,” and “Today’s Supernatural.” Every song felt like a hyper-energetic take of the studio version, punctuated by abstract videos projected on the clown-mouth larynx, and a lightshow of flashing, multicolored teeth. It was enough to make a perfectly sober concertgoer feel like she’d been served a hearty cocktail of amphetamines and hallucinogens. After playing a few older songs the band returned to Centipede Hz with “Moonjock,” the album’s lead track and one of its more accessible songs. Despite having been released just a few weeks ago, it went over especially well with the audience. It has some of the album’s best hooks, and the chorus near the end felt like the culmination of rising energy through the first half of the set.

Following that was “Pulleys,” also off Centipede, but way more rambling and harder to grasp. It has the smoother aesthetic of Merriweather but lacks clear hooks. The orchestration stayed at full force, which wasn’t exactly ideal after a solid hour of bombardment with loops and clown teeth — we could have used a breather. The band proceeded in that vein for a dozen or so more songs, dividing them evenly between the new album and older material. It closed with “Amanita,” another of Centipede Hz‘s poppier, more accessible moments.

It’s hard to appreciate some of Animal Collective’s more experimental new songs in a live setting if you haven’t assiduously listened to the record. Either you’re drawn in from the first flash of neon clown teeth — in which case you may be one of the devoted who’ve been following their decade-plus career — or you’re left behind for the potentially overwhelming two-hour sensory experience. If you’re new to Animal Collective or indifferent toward them, Centipede Hz or the current tour isn’t the best introduction. But while this round of live shows might not convince new listeners, old fans seem to love them as much as ever.