At Hasnia, the kebabs and couscous are the stars. 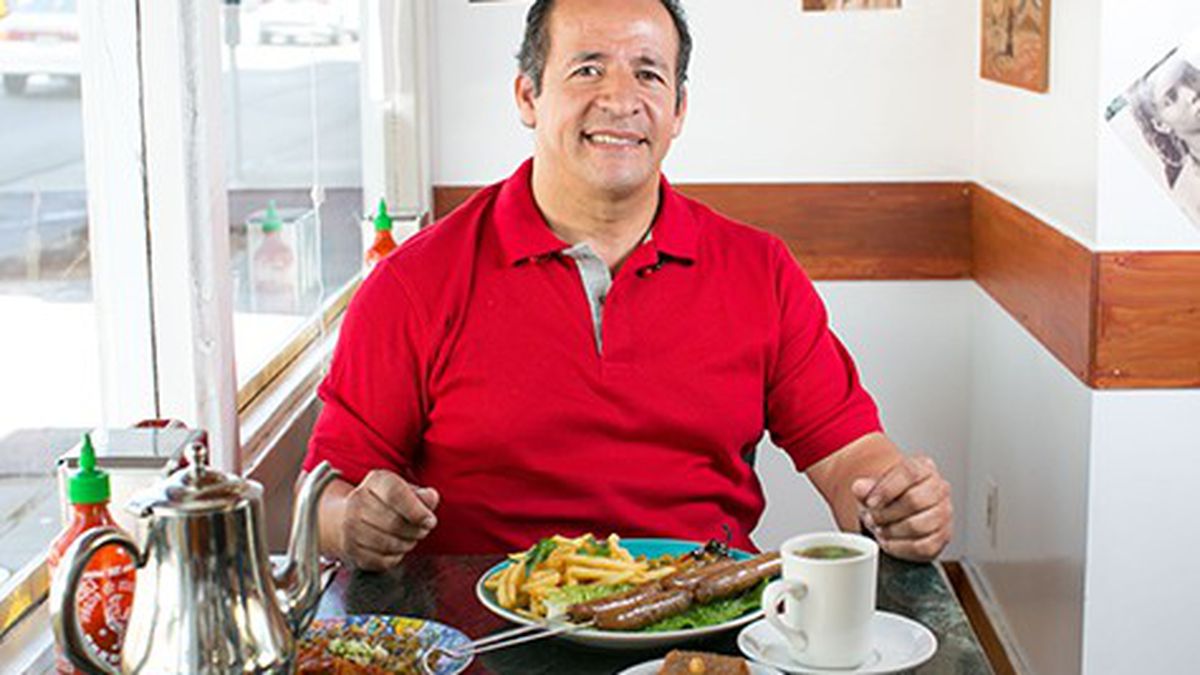 For those who love to eat inexpensive international food, the swath of West Berkeley near the intersection of University and San Pablo avenues is a treasure trove. You’ll find the traditional foods of Germany, Mexico, Pakistan, Thailand, Vietnam, and more, all represented within a two-block radius — to say nothing of the cluster of well-stocked Indian, Mexican, and Middle Eastern grocers. Armed with just a fifty dollar bill, a thrifty diner could buy a week’s worth of lunches, never eat food from the same continent twice, and still have change left over.

The area makes for a fitting home, then, for Hasnia, the East Bay’s first Algerian restaurant. Tiny and unobtrusive, the restaurant opened this January in the space formerly occupied by Da Afghanan, an Afghan eatery. Owner Slimane Djili, the proprietor of a small chain of creperies, noted that there’s a dearth of North African restaurants in the East Bay, even as those immigrant communities — from Morocco, Algeria, and beyond — have begun to blossom here. Hasnia was born out of Djili’s desire to create a place for that community, and for newcomers to the culture, the restaurant has the feel of a local hangout you might stumble upon in a foreign city. The TV is always tuned to an Algerian station — an ebullient French-language soccer broadcast, inevitably, if you visit during the day.

If you’ve never had Algerian food before but are familiar with Moroccan food, or any of the other Mediterranean cuisines of North Africa, you’ll recognize the repertoire of flavors here — it’s a cuisine of tadjines (aka tajines) and kebabs and lots and lots of turmeric. Said Ghozali, the restaurant’s manager and head cook, is an Algiers native who spent years working as an expediter at high-end San Francisco restaurants such as Fifth Floor and Gary Danko. Unlike those restaurants, however, Hasnia has no such fine-dining aspirations: Most of the dishes are from recipes that Ghozali learned from his mother.

Perhaps the notable thing about Hasnia is that it is one of a small handful of places in the East Bay where you can get properly cooked couscous prepared in the traditional way. Each batch is steamed (and allowed to rest) three times in a big ceramic couscousiere, resulting in grains that are light and fluffy — not the gummy clumps you get when a cook tries to take a shortcut. (As Ghozali put it, “I don’t put it in the microwave like some others do.”) Each order is topped with chickpeas, a braised meat of your choice (or none if you’re vegetarian), and big chunks of vegetables (carrot, zucchini, and turnip) cooked until they’re very soft. Best of all, it comes with a bowl of hot broth — fragrant and soul-warming — that you ladle over the couscous over the course of the meal, allowing for an enjoyably soupy eating experience.

According to Ghozali, Algerian cooks don’t tend to use as much spice as you’ll find in, say, Moroccan or Tunisian cuisine. The flavors are a bit lighter, and there’s an emphasis on vegetables — Ghozali said he buys most of his from small organic farms. In most cases, that minimalist approach serves the restaurant well. The meal often starts with a complimentary order of hmiss (pronounced as though it rhymes with “a niece”), a kind of relish that’s made up of just a handful of ingredients (roasted peppers, garlic, olive oil, and a little bit of tomato) — addictive when scooped up with the chewy Algerian flatbread that Ghozali makes when he’s had the time. (When he hasn’t, slices of soft baguette work just as well.) And a bright-orange white bean soup was gorgeous in its simplicity, with a drizzle of good olive oil that lent the dish a luxurious richness completely out of proportion to the wholesomeness of its component parts.

Other times, I longed for bolder flavors. The lamb tadjine, for instance, was made up entirely of things I like: lamb shank braised in a pressure cooker until very tender, yellow-tinged rice, and a multitude of green olives. And yet every part of the dish was a little bit bland — even a slightly heavier hand with salt would have gone a long way. (I’ve observed this tendency toward under-salting often enough at North African restaurants to make me wonder if it might just be a cultural preference.) In any case, there’s hot sauce on the table for those who like food with more of a kick — bottles of Sriracha and Tapatio, variously, in a show of multinationalism, or a traditional harissa-based hot sauce that’s available by request.

Hasnia is also a great place for those who enjoy feasting on grilled-meat skewers — the lamb and chicken kebabs, both seasoned simply with ras el hanout (a traditional spice blend), were delicious and generously portioned. But the highlight was the excellent merguez sausage that Ghozali buys from the same Halal butcher — a fellow Algerian — who supplies all of Hasnia’s meat. These were the size and shape of breakfast links, well-spiced, and just lamb-y enough to keep your interest. Twenty bucks will buy you a big combination platter with six skewers of your choice (a ton of meat, really), French fries, a side salad, and bread — plenty of food for two hungry diners to share.

During a subsequent lunch visit, I ate the lamb kebabs in sandwich form, grilled to medium-rare on request and stuffed into a toasted baguette with some raw onion and a smear of harissa. On the side were fries (hot and crispy, even if they were the pre-frozen, out-of-a-bag variety) and a long wedge of romaine lettuce topped with a savory slurry of dressing that consisted mostly of chopped up hard-boiled eggs — an elegant touch that pointed to the cuisine’s French colonial influence. All in all, a better-than-respectable lunch for less than $10.

You’d do well to wash down any of these dishes with a cup of sweet, minty Algerian tea. And if you have a particularly sweet tooth, you’ll want to try the kalbelouz (also spelled Kalb El Louz), a dessert that Ghozali calls the Algerian version of Red Bull. It’s a little square wedge of cake, coarse and crumbly because it’s made with semolina, and very, very sweet. Each piece of cake is topped with a single almond and drenched with orange blossom water, which keeps it moist and adds a distinctive floral flavor.

Traditionally, this is the cake that’s eaten after a person has finished fasting all day for Ramadan, to give the body a jolt of energy, Ghozali explained. At Hasnia, you can have it for dessert any time you like.

Next ArticleWednesday Must Reads: Glazer and Bonilla Head to Runoff; State Enacts Rationing for Outdoor Watering