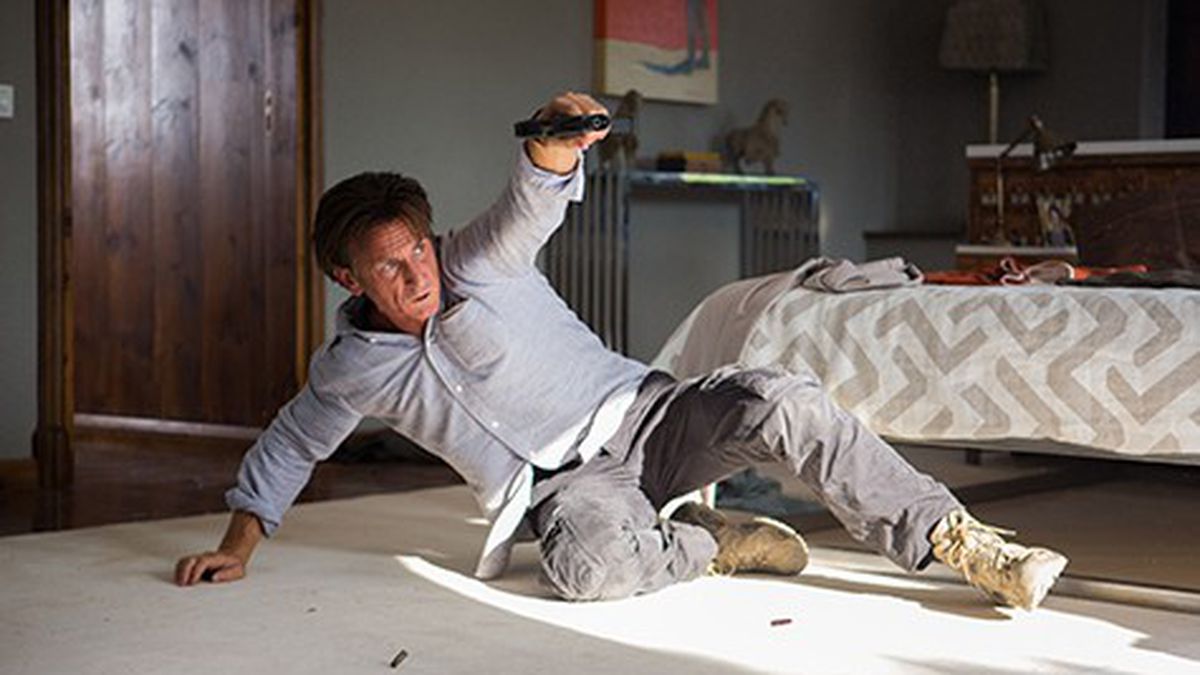 The Gunman: Take It or Leave It

The big question for anyone considering catching The Gunman is the one about Sean Penn: Is he finally going to join the Old Guys Action Movie Society and Fisticuffs Club, or not? Now is the right time to ask. Penn, 54, is on the verge of automatic membership anyway. Will he be content to join Old Guys big daddy Liam Neeson and the rest of the gang at the gym, banging out reps in preparation for vigorous stunts and make-believe combat in the service of “secret agent coaxed out of retirement for one final challenge” parts? Or does he still have it — the mid-career swagger and basic unpredictability that made such flicks as Mystic River and Milk must-sees? The Gunman sits at a major crossroads for the former bad-boy actor.

Did I say crossroads? French filmmaker Pierre Morel’s trite, clumsily assembled spyboiler more closely resembles an accident scene. The impressively muscled Penn, who goes shirtless for a large percentage of the movie’s running time, stars as Jim Terrier, a spook with regrets. We first meet him in 2006 in the Democratic Republic of the Congo, where he is pretending to be a private security op for a humanitarian clinic. Jim’s real mission is to assassinate a government mining minister whose plans do not jibe with those of Jim’s shadowy employer. His hasty post-job exit from the country means he’s leaving behind his girlfriend Annie (Italian actress Jasmine Trinca). So our guy has two big regrets: the hit (he only did it for the money) and the ex.

True to the overwhelming majority of Old Guys Action scripts, Jim is desperate to tie up loose ends — and stop those bad-memory headaches — when Pete Travis’ travelogue-y screenplay (adapted by Don MacPherson from Jean-Pierre Manchette’s novel) rejoins the wily rogue tough guy back in the DR Congo in the present day, trying to make amends by working for a water-project NGO. But his former mercenary pals won’t leave him alone, natch. So he muss kill dem.

Jim socks, stabs, shoots, and defenestrates an alarming number of foes while skipping through London, Barcelona, and various parts of Africa. All that is standard procedure for aging action heroes — they almost always overdo it in the brutality department. But two small plot fragments do make an impression. In one scene, rough-and-tumble Jim is on his way to a dress-up meeting in Spain, so he casually swipes a jacket off the back of a tourist’s chair in a public square, a move that tells us a lot about how he views the rest of the world. The other telltale bit of business occurs when Jim is warding off Cox (Mark Rylance), the chief bad guy, at a children’s funfair. Cox joins forces with a female agent poised to distract Jim while stabbing him with a hypodermic needle. Jim reacts by delivering a hard right hook to the side of the woman’s head, and we watch her bleed, stagger, and fall. It’s rare to see a macho movie hero pop a woman so violently. Director Morel — who made the original Taken (aha!) as well as the parkour-crazy French slugfest District B13 — evidently wants us to understand just how rough it is to be a hired goon these days. Or maybe someone got a kick out of seeing Penn’s character deck a female spy. Either way it gives the movie even more of a fishy flavor.

Javier Bardem costars as Jim’s former buddy Felix, who has moved in on Annie in the intervening years. In another, grander, less clichéd movie, Bardem and Penn would have switched roles. Bardem brings a welcome sense of humor to even the driest script. Every time Felix shows up we can relax and watch an actor in complete control of the situation — Penn seems to be holding his breath in every scene, trying not to slip up. How could anyone send this movie out the door with such a sour, irritated, unlikable hero? Ray Winstone (as Jim’s old Cockney pal) and Idris Elba (Interpol agent) also come along for the ride, but Penn’s grim Jim sets the tone unwaveringly, from the Congolese bush to the Spanish bullring. The only stunt the dyspeptic Jim doesn’t try is beating up a bull with his bare hands. Maybe in the sequel.