The Navy's own data suggests that island residents were at risk of radiation exposure. 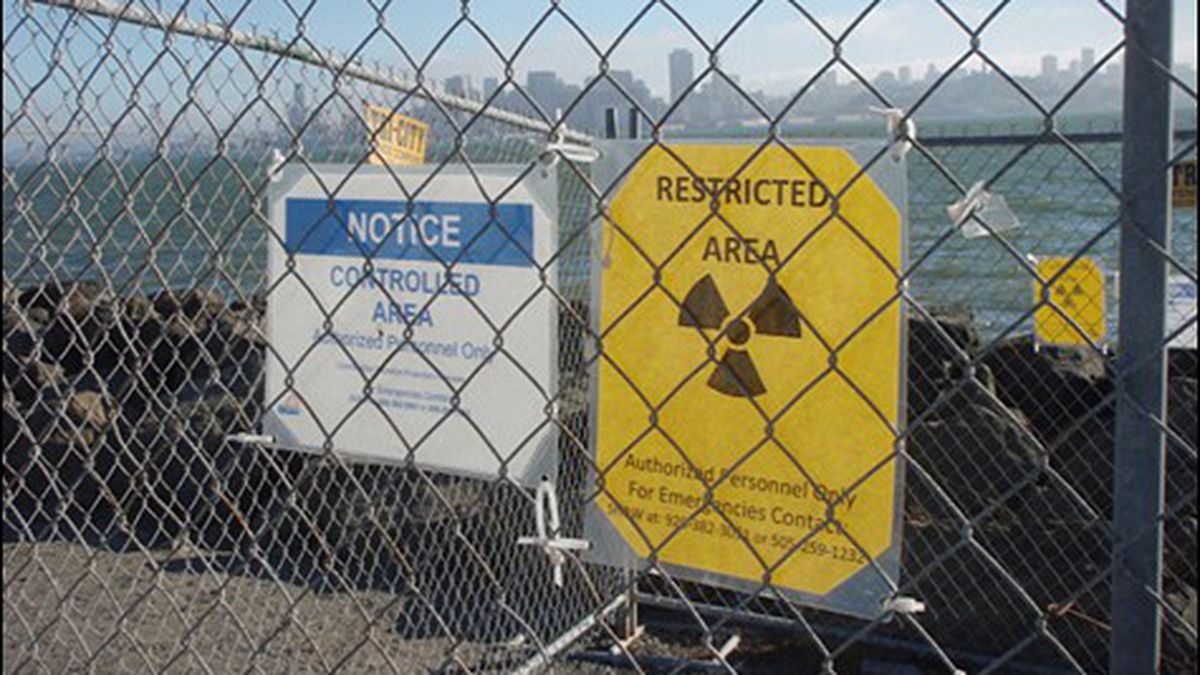 Navy officials have repeatedly downplayed the risks of radiation exposure to current and former residents on Treasure Island. But data from the US Navy shows that measurements taken in former residential areas of the island revealed pockets of alarmingly high radiation levels. The data, which the Express obtained as a result of a public records request, also raises questions as to whether former residents were, in fact, exposed to high amounts of radiation and whether soil on the island can be sufficiently cleaned up for the massive “eco-friendly” housing and commercial development planned for the former Navy base.

“That’s a surprisingly high measurement,” said physicist Steve Fetter of the University of Maryland School of Public Health in response to the Navy’s disclosure of the highest yet surface radiation reading measured on the island — 0.08 rem/hr. (Rem/hr is a measurement, known as a dose rate, of the biological effects of being exposed to radiation.) “If you were standing above that spot for a long time, it would be hazardous. But the [radiation] dose rate would drop off pretty quickly as you moved away — unless there were other nearby objects also emitting radiation.”

A 2009 Navy document called the Radiation Protection Plan also revealed troubling data on the concentration of radionuclides in the soil: readings of “up to 9,000 picocuries per gram” were taken on the island, but were limited to certain hotspots. For some perspective, closed military installations in California that had been contaminated with radioactive elements typically must be cleaned to a standard of two picocuries per gram in order to be considered safe. “If there was a high concentration of radionuclides in the dirt, and people were inhaling or ingesting it,” Fetter said, “that would be very hazardous.”

Despite the newly released data, much is still unknown about the radiation levels on Treasure Island. For example, very little information has been publicly released on the eight hundred-plus truckloads of radiologically contaminated soil that were shipped off the island in recent years. Shaw Environmental, the Navy’s lead private contractor, has received a Notice of Violation from the California Department of Public Health for its failure to properly collect and record this data.

David Brenner, director of Columbia University’s Center for Radiological Research, reviewed the Navy’s Radiation Protection Plan, which was prepared by Shaw Environmental. He noted the high toxicity of radioactive disks that have been found all over Treasure Island. According to the Navy, these octagonal disks emit contact radiation dose rates of up to 10 rem/hr, but more typically 0.1 to 0.7 rem/hr. “Had someone got hold of one of the metal disks and put it in his pocket for a few days,” Brenner said, “the outcome could have been very bad — significant radiation sickness or even death within a few weeks.”

The origin of these disks is still a mystery, but they may have been used in nuclear detection and decontamination trainings during the Cold War. The disks were disposed of in four pits on the island. Condominiums that housed military families in the Seventies, Eighties, and Nineties were then built atop these pits. These areas were only recently fenced off to protect the island’s 2,000 current residents, many of whom are low-income.

Brenner cited one silver lining in the radiation data: only a “comparatively small area of the island” had “highish dose rates.” But a key question, he said, is, “How many hours did anyone spend in this region near Building 1321?”

Building 1321 is a former condominium complex for military families located in the scenic seaside area on Westside Drive. During excavations in 2009, the 0.08 rem/hr reading was taken just west of this building about one foot from one or more of the radioactive disks. The reading appears to have been taken in the building’s front yard. The highest concentrations of radioactive soil were also found here.

Brenna Summers, who grew up on the island, believes that she may have played in this soil. Summers was about two years old when her parents and three siblings moved to Treasure Island from Hawaii. They lived on the island from about 1972 to 1976, and again from 1981 to 1985. During both periods, her family unknowingly lived atop the site of the former mock-up nuclear decontamination-training ship called the Pandemonium and alongside one of the pits where the radioactive disks were buried. Her family resided in Buildings 1315 and 1316 — just a couple doors down from Building 1321.

Summers remembers that there used to be a playground and a park with picnic benches adjacent to Building 1321. “We were all digging in there, and eating the sand, and doing everything that little kids do,” she said. The playground featured a turtle sculpture that kids could crawl underneath.

Two weeks ago, Summers read previous Express investigations of contamination on Treasure Island (see “A Radioactive Isle,” 9/5 and “Contamination Destination,” 10/31). She wonders if the combination of radioactive and chemical contamination on the island might explain the health nightmares that she and her family have suffered over the years. “We’ve been sick with all these different, random, weird things for so long,” she said, “and we’ve just been looking for answers.”

According to Summers, her sister Misty, who was seven when their family came to Treasure Island, had an emergency hysterectomy at age eighteen to remove a pre-cancerous mass from her uterus, fallopian tubes, and ovaries. Her other sister, Heather, was pregnant while living on the island; Heather’s son was born with birth defects. Summers’ children were later born with birth defects as well. Summers’ mother and sister Misty survived skin cancer; her brother Brian had a pre-cancerous growth removed from his face. Everyone in the family has suffered some form of autoimmune disease. All the pets the family owned or took care of while living on the island — including eight dogs and three cats — died of cancer. With the exception of one cat, all the pets died between the ages of one and six years old.

At least thirteen cancer survivors and at least two people who died of cancer lived in homes atop or bordering the pits where the radioactive disks were buried. Breast cancer survivor Kim Kellner (who is featured in the video accompanying this article) grew up next door to the Summers family at 1317 Gateview Avenue. Kellner and her childhood friends are currently tracking down their former neighbors and classmates in an effort to determine exactly how many of them developed cancer. Many other past residents are likely unaware of contamination discoveries on Treasure Island, as the Navy has not contacted any of them.

Current residents, unconvinced by public officials’ repeated assurances that they are safe, have recently formed the Treasure Island Health Network (TIHN2012.org). Summers completed one of the group’s surveys designed to assess health trends among past and current residents. She said that current residents have some of the same early health issues that her family suffered — including bizarre rashes, breathing trouble, and bald spots. These particular problems dissipated after the Summers family left the island.

Many types of non-radioactive chemicals — including at least 24 chemicals of present concern on Treasure Island — can cause both minor and serious health effects. Additionally, cancers, genetic mutations, and birth defects are all linked to radiation exposure. However, even if an epidemiological study of Treasure Island residents were conducted, causality would be extremely difficult to establish because all these health problems also occur among people who are not exposed to contamination.

For example, about 45 percent of the general population will ultimately develop some form of cancer, irrespective of radiation exposure. Brenner, of Columbia University’s Center for Radiological Research, said that a very rough rule of thumb is that each 100 rem of total long-term radiation exposure will add an additional 8 percent risk of cancer in one’s lifetime. Individuals exposed at younger ages are at greater risk. To get a rough estimate of the risk to people exposed as children, Brenner advised increasing that risk estimate to about 15 percent per 100 rem. Thus, assuming that Summers and her siblings were exposed to a total of 100 rem of radiation over their eight years on the island (which is unknowable with current data), Brenner said they would have a “very approximately 60 percent chance of developing cancer during their lifetime — the normal 45 percent plus an additional, radiation-related 15 percent.” This risk would be greater if Summers inhaled or ingested a concentrated amount of radioactive dirt.

Without more information from the Navy, it’s impossible to know if the playgrounds, parks, and yards atop the disposal pits posed serious dangers. The Navy has vaguely indicated that higher readings were found in “limited locations where radioactive material was co-located and buried below ground or where individual commodities lay near the surface.” (“Commodities” is the Navy’s preferred term for solid radioactive objects.)

Meanwhile, Summers is redoubling her efforts to monitor her own health, including getting her moles removed at the earliest possible sign of pre-cancerous cells. “If we were to find out that all these different illnesses that we had could be traced back to [Treasure Island], it would be kind of bittersweet — because we would finally have an answer, which is nice, but then the answer is not so nice,” she said.

“I’d like to know what I can expect in my future.”