Cowboys over Saints by a touchdown. 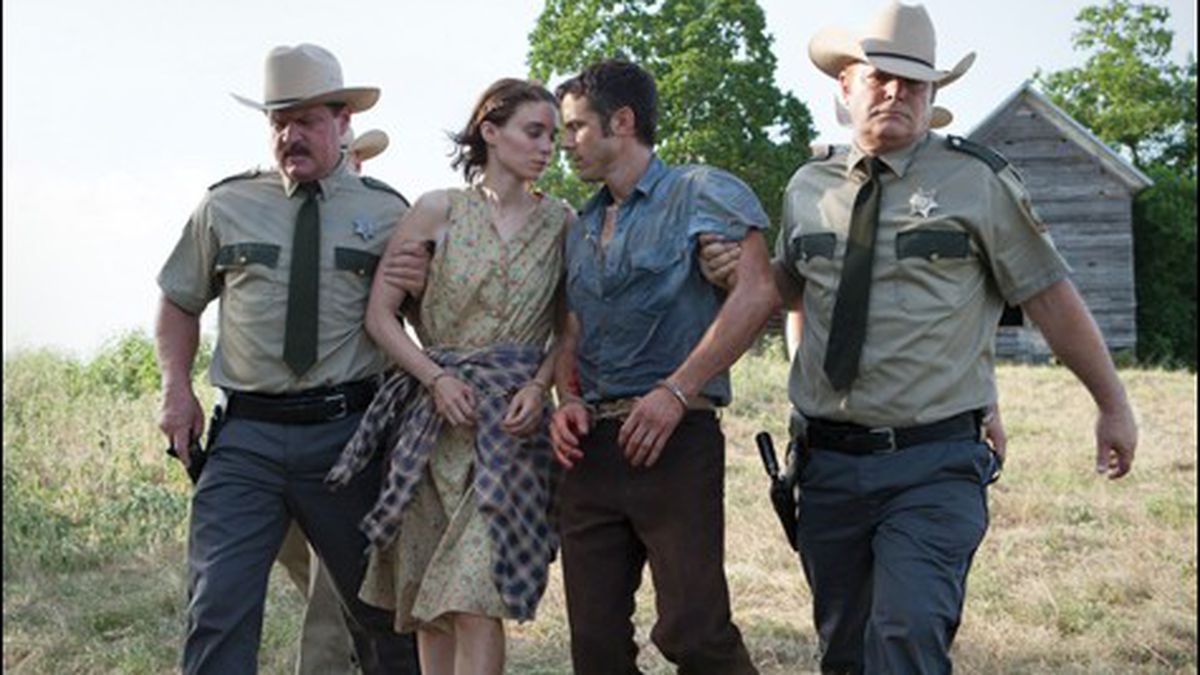 Ain’t Them Bodies Saints. How’s that again? Awkward as the title is, it at least tries to stimulate our imaginations. What bodies? Does anyone get killed? Are the characters especially saintly? The tale of an escaped convict (Casey Affleck) who returns to his hometown to reunite with his true love (Rooney Mara) might just as easily have been called Bob Muldoon Is Back in Town, or maybe Nobody Home. With its lonesome prairie landscapes and subdued townsfolk, doggoned if it doesn’t look like The Tree of Life with shotguns.

But let’s give writer-director David Lowery, a film editor turned filmmaker, a shred of credit. He doesn’t seem particularly interested in all the pent-up violence he’s got simmering on the front burner in the story of former bank robber Bob (Affleck), who crashes out of prison and immediately heads back to Meridian, Texas to see his wife Ruth Guthrie (Mara) and their young daughter, with Ruth’s new boyfriend, deputy sheriff Patrick Wheeler (Ben Foster), standing in the way. What fascinates Lowery is the romance between Bob and Ruth, aka “The Bank-Robbing Romeo & Juliet,” a youthful dream that is essentially lost and gone forever. That’s a very slender and elusive premise indeed.

Three years after Bob gets sent up, Ruth is a skinny young woman in a white dress, happily walking down the road with her toddler daughter Sylvie. More than that we don’t really know, and we’re puzzled at how Ruth managed to avoid prison herself for her role in Bob’s (offscreen) crimes, summed up in the prologue. But there she is, a bit too glamorous for her small town, patiently waiting for her fate to play itself out. Is she still in love with Bob? Well, yes and no. Before this film, Mara’s most effective playing was in Steven Soderbergh’s druggy melodrama Side Effects. As with Ruth, that role called for her to be vulnerable, taciturn, and most of all unlucky. She fits the part but it’s hardly a challenge.

Affleck, famous for portraying crazy loners with a mean streak (The Assassination of Jesse James by the Coward Robert Ford, The Killer Inside Me), is asked here to add a deep layer of regret to his usual psycho-drifter persona. He already possesses a distant, distracted anxiety, the manner of a murderer, his stock-in-trade. When Bob admits, “I haven’t slept in four years and I’m tired,” we feel it. Bob and Ruth’s love clinches will never make a highlights reel — they don’t even get to embrace on the movie’s poster — but somehow we can see they want to recapture what they once had. Ain’t Them Bodies Saints is the type of movie where everyone tiptoes around, conversing in soft tones, and all the while we’re waiting for one of them to lose his temper and start blowing people’s heads off. Other filmmakers have pulled off this type of situation better than Lowery. Suspense is evidently not his strong suit.

Foster holds his own as straight-arrow deputy Patrick, the odd man out. In the long run, this sincere indie will probably be seen as an unremarkable career-builder for him, Mara, and Affleck. Meanwhile, we wish there were more screen time for Keith Carradine’s Mr. Skerritt, keeper of the town’s general store. His edgy scene with a trio of scruffy bounty hunters deserves to be enlarged upon for its own sake. In the end, the film’s risky minimalism does not pay off. None of the actors, with the possible exception of the veteran Carradine, can overcome the stillness.